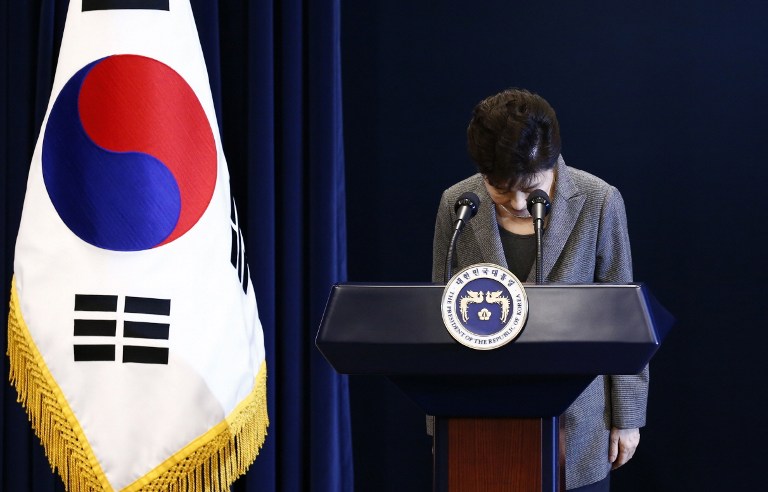 SEOUL, South Korea (3rd UPDATE) – South Korean President Park Geun-Hye was fired by the country’s top court on Friday, March 10, as it upheld her impeachment by parliament over a wide-ranging corruption scandal.

The unanimous decision brought to a climax months of political turmoil that brought millions of people onto the streets in weekly protests, and triggers a new presidential election to be held within 60 days.

That will offer South Korea a chance to draw a line under the scandal, which has occupied its attention for months, even as North Korea has unleashed new missile launches and threats that have raised international alarm.

Park, the country’s first female president, also becomes its first leader to be removed by impeachment. She is obliged to leave the Blue House and loses her executive immunity from prosecution.

Rival groups of supporters and opponents watched as the verdict was read out live on television.

Anti-Park demonstrators erupted with joy when the verdict was read out, cheering and hugging each other, some shedding tears. “We won, we won,” they chanted.

“I am so pleased that I cannot hold back tears,” said Shin Seo-Young, 43, clasping her friend. “This is a sweet revenge.”

A few hundred meters away, and separated by a huge police presence, the president’s flag-waving supporters were stunned.

“We don’t accept this decision,” said Cho Bong-Am, 60, a kindergarten operator. “We will take to the streets to fight to the end.”

A few minor scuffles broke out as the largely older pro-Park crowd sought to register their dissent, but were rapidly brought under control.

Park was found to have broken the law by allowing her friend Choi Soon-Sil – who is already on trial for abuse of power – to meddle in state affairs, and breached rules on public servants’ activities.

“Park’s breaching of the constitution and the laws betrayed the trust of the people,” said judge Lee, describing her actions as “a serious and unacceptable violation of the laws”.

The president “completely concealed Choi’s meddling in state affairs and denied it whenever suspicions over the act emerged and even criticized those who raised the suspicions.”

One of Park’s lawyers expressed “strong regrets” over the verdict.

But Kwon Seong-Dong, a lawmaker and a member of the parliamentary indictment committee, said the verdict confirmed the rule of law and that “all people including the president are equal in front of the law”.

And Park’s own Liberty Korea party apologized, with its interim leader saying it “failed to protect the dignity and pride of South Korea”.

Park, the daughter of a late army-backed dictator, secured the highest vote share of any candidate in the democratic era when she was elected in 2012.

But her aloof style and a series of controversies, coupled with mounting economic and social frustrations, saw her ratings plunge and millions take to the streets to demand her removal.

She was impeached by parliament in December on charges including bribery and abuse of power, and an overwhelming majority of South Koreans – around 77% – supported Park’s removal in opinion polls.

She repeatedly apologized for the impact of the scandal, but rejected all allegations of wrongdoing when she submitted a written statement to the court’s last hearing in February.

“I’ve never sought private gains or abused power as president… I plead with the court to make a wise decision,” she said.

With the corruption crisis resolved, South Korea must now turn its attention to the troublesome North, whose recent provocations pose a challenge to US President Donald Trump who has vowed to reign in the regime.

China, concerned over an American missile-defense system being rolled out in the South, has urged compromise including the scrapping of annual US-South Korean military exercises that infuriate Pyongyang.

Thousands of US troops are stationed in the South, and State Department spokesman Mark Toner said it would “continue to meet all our alliance commitments, especially with respect to defending against the threat from North Korea.”

The impeachment, he added, was a “domestic issue” and the US had no position on it. “It is up to the Korean people and their democratic institutions to determine the future of their country, and we respect their decisions.”

Washington looked forward to a “productive relationship with whomever the people of South Korea elect to be their next president”, he said.‎

The presidential election is expected to be held on May 9. The front-runner is Moon Jae-In, former leader of the opposition Democratic Party, who had the support of 36.1% in a Realmeter poll released on Thursday, March 9. – Rappler.com