BUSAN, South Korea (UPDATED) – An academic who became a global internet sensation when his children interrupted a live television interview lamented the perils of online fame Wednesday, March 15, telling reporters: “I’m so through with this.”

Robert Kelly, a professor at South Korea’s Pusan National University, was sharing his insights with the BBC last Friday, March 10, on the downfall of impeached president Park Guen-Hye when his daughter Marion waltzed into his home office, followed by his toddler son James, who wheeled in on his baby walker.

Kelly’s wife Kim Jung-A, who was watching the interview on television from their living room, flew in seconds later, flinging her arms in a desperate attempt to retrieve the young intruders, before returning on all fours to reach out and close the door.

The interview – described as a “perfect piece of physical comedy” by the BBC – spread like wildfire, watched more than 160 million times on the broadcaster’s Youtube page as of Wednesday.

Then the humor turned into extensive online commentary on how Kelly handled the situation, their home life, and a wider debate on newspaper opinion pages over perceived racism after some posters questioned whether the woman in the video was his wife or a nanny.

Major international news outlets including CNN, the Guardian and the Wall Street Journal have covered the gatecrashing, which was also parodied by the Jimmy Fallon Show.

Kelly, who specializes in East Asian affairs, said he and his family had been “buried under phone calls, messages and Twitter”.

“I’m so through with this that I’m not even reading the websites anymore. There are also think pieces on this too that I have given up trying to read,” he told a press conference in Busan organized by his university – which his wife and children also attended.

‘Know me for my work’ 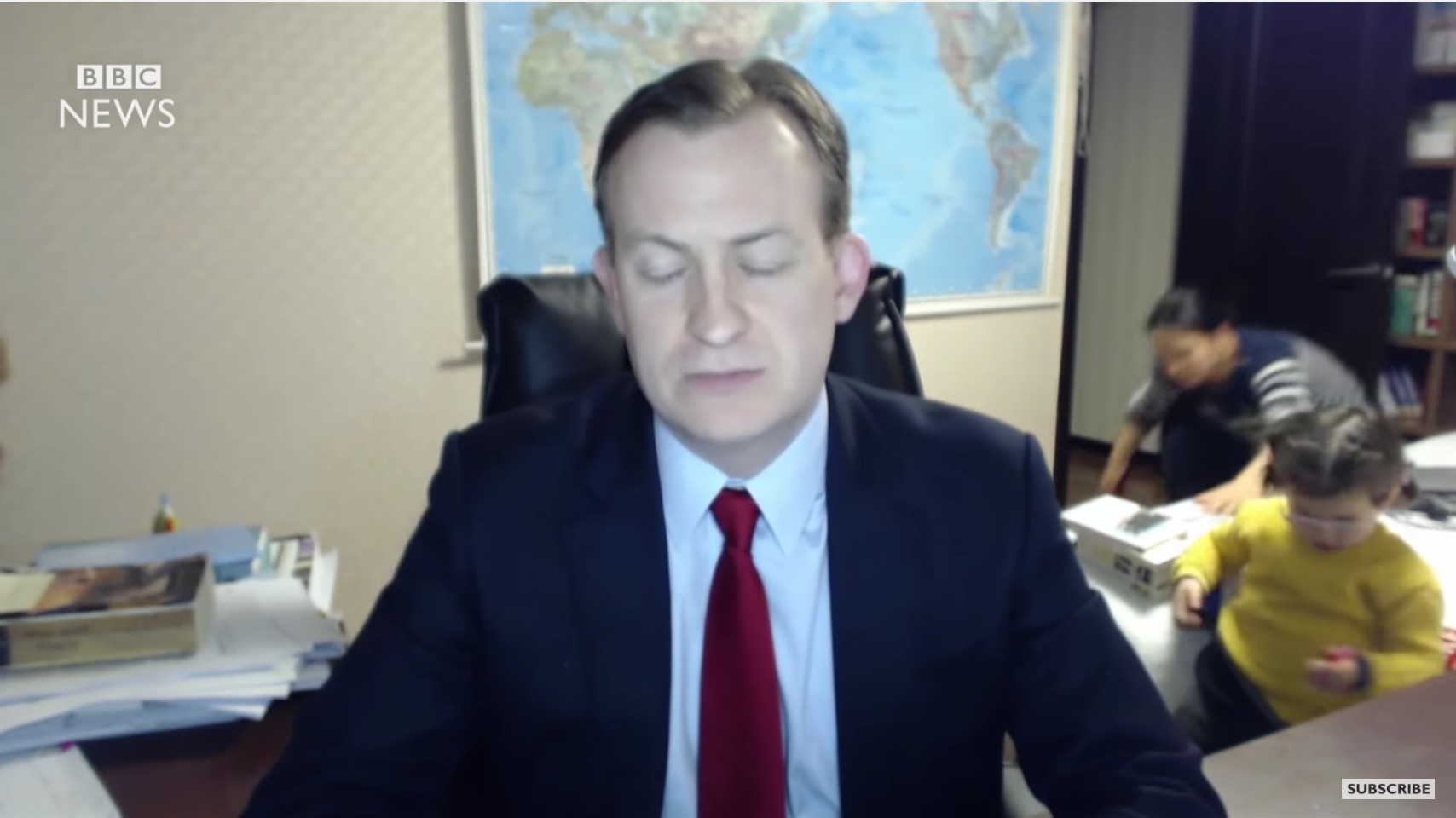 US-born Kelly, who studied at Ohio State University, teaches US foreign policy at the institution where he is an associate professor, and has research interests in international politics and political theory.

He has written a number of academic papers, and regularly contributes to publications such as Newsweek or appears as a political commentator on international broadcasters.

“I hope that at some point, people know me for my work,” he said. “I mean, this wouldn’t be the first line in my obituary.”

Asked if, with hindsight, he would have refused the BBC permission to upload the footage to its Facebook page, he said: “If I could have prevented the recording altogether from going on the Internet, yes.”

The video triggered accusations of discrimination in South Korea and elsewhere after some online posters overseas immediately assumed that Kelly’s wife was a nanny.

“The babysitter is currently searching for new employment as of now,” said a user on Twitter.

Another tweeted: “Nanny got fired after this.”

But Kelly’s wife Kim shrugged off the discriminatory comments, urging viewers to take the video more light-heartedly, and expressed hopes that it could bring about change.

“There are a lot of multicultural families in the world and I hope that this could be an opportunity to change people’s perception,” said Kim.

The family were now looking to move on from their instant fame and return to their daily lives, said Kelly.

A Wikipedia page was created for him on Saturday, March 11, as the video began to spread, but the online encyclopedia has marked it for possible deletion amid questions over his significance.

One contributor wrote: “Just because he is interviewed by journalists (with or without his family) does not make him notable.” – Rappler.com