Mar 20, 2017 8:13 AM PHT
Agence France-Presse
Facebook Twitter Copy URL
Copied
Martin Schulz: 'Starting now the fight begins to become the top party in the country and take over the chancellory' 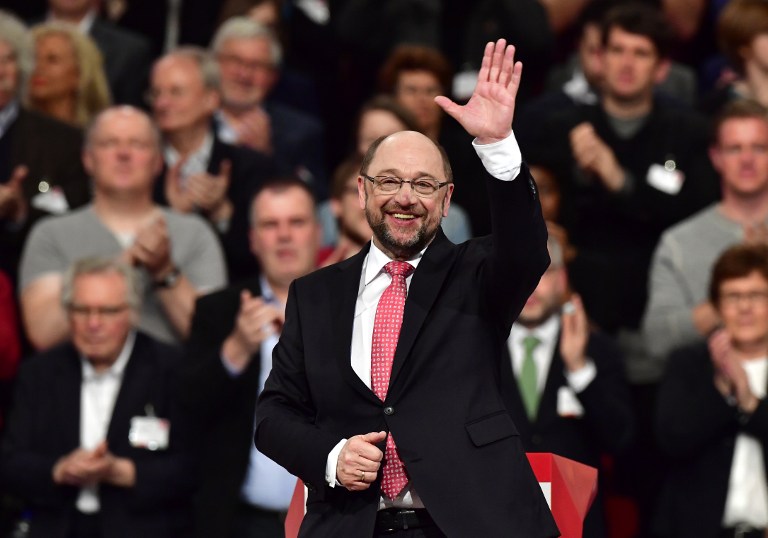 The bearded Social Democrat, already credited with giving his ailing party a strong shot in the arm, was unanimously elected SPD leader and standard bearer at a one-day congress in Berlin.

In a speech to the SPD rank and file, the 61-year-old attempted to harness this momentum against Merkel, whose conservatives just a few months ago had an apparently invincible lead in the polls.

“Starting now the fight begins to become the top party in the country and take over the chancellory,” Schulz told the party congress.

Schulz’s decision to leave the European Parliament, which he headed for 5 years, and become a candidate for German leader has given the Social Democrats a new lease of life since ex-party chief Sigmar Gabriel asked him to take the reins in January.

“It’s been encouraging to see in the last few weeks that people are hopeful again that the Social Democrats have a shot” at election victory, Schulz told Berlin public radio RBB this week.

“My intention to pursue policies that make the lives of hard-working people a little better is apparently finding a lot of support.”

Opinion polls have recorded a 10-point jump for the SPD in recent weeks with some placing it ahead of the conservative bloc behind Merkel, who is hoping to win a fourth term in office.

The SPD congress has fired the starting gun for the national election campaign and also the race for 3 German state polls, the first of which will be held in Saarland on the French border, on March 26.

Ahead of the congress, Schulz won a nod of support from EU Commission chief Jean-Claude Juncker who, despite his center-right stance, has had a somewhat tense relationship with Merkel.

“Both Martin Schulz and Angela Merkel have the qualities to be chancellor,” he told Bild newspaper on Sunday.

The Social Democrats, junior partners in Merkel’s government for nearly 8 of the last 12 years, has long suffered in Merkel’s shadow.

But Gabriel, now Germany’s foreign minister, told supporters this month that Schulz’s entry into the race as a Berlin outsider appeals to many SPD voters who are tired of the “grand coalition”.

“He embodies the feeling of Social Democracy, in his head and above all in his heart,” Gabriel said.

Schulz attributes his surge to a sharpened focus on the party’s classic bread-and-butter issues including wealth redistribution, free education and gender equality.

He has in the process become something of a social media phenomenon, inspiring a raft of affectionate hashtags and viral videos among his fired-up fans, and dubbed “Robin Hood” by the press.

While the SPD party is turning decidedly to the left with Schulz, the party on Sunday said it favored in the French presidential race centrist ex-economy minister Emmanual Macron.

Schulz’s unique life history – he wanted to be a professional footballer, didn’t finish high school, beat alcoholism before opening a bookstore and taught himself 5 languages – gives him a common touch.

He has faced attacks from conservatives that he has adopted a “populist” tone but he dismisses the charges as elitism.

“I speak in a way so you can tell me apart from my rivals, and I try to make complex ideas understandable for my audience,” he insists.

Party members are hopeful Schulz can help heal the divisions stemming from a program of labor market reforms known as Agenda 2010 and passed by the last SPD chancellor, Gerhard Schroeder, who lost to Merkel in 2005.

The unpopular measures were successful in driving down unemployment but also a key factor in the party’s bitter and lasting gulf between centrists and leftists.

Schulz, stressing his humble roots, has pledged to soften some of its key planks, including lengthening the period of time the jobless are entitled to full benefits.

Meanwhile Merkel, a frequent winner of Forbes magazine’s most-powerful woman ranking, said she was not troubled about the wind in the SPD’s sails, noting that there had always been potential in its “very meagre poll ratings”.