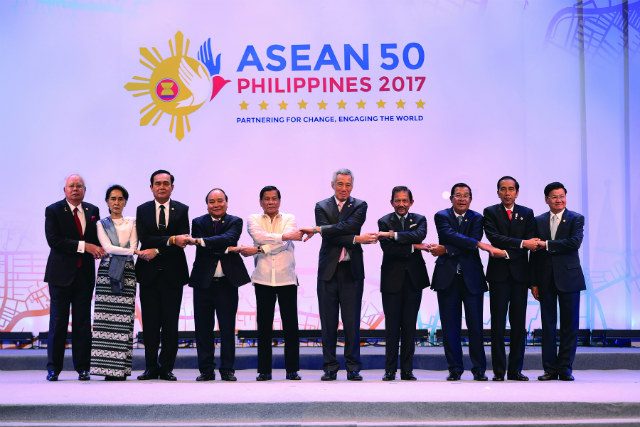 Philippine President Rodrigo Duterte is the chairman of the 30th ASEAN Summit held in the Philippines from Wednesday to Saturday, April 26 to 29.

A watered down version of previous drafts according to media reports, the ASEAN Chairman’s Statement on Sunday merely said, “We took note of concerns expressed by some leaders over recent developments in the area.”

The statement did not go into specifics, and repeated lines such as the need to “exercise self-restraint,” to avoid “actions that may further complicate the situation,” and not to resort to “threat or use of force.”

Below is the full excerpt pertaining to the South China Sea:

120. We reaffirmed the importance of maintaining peace, stability, security and freedom of navigation and over-flight in and above the South China Sea. We welcomed the operationalization of the Guidelines for Hotline Communications among Senior Officials of the Ministries of Foreign Affairs of ASEAN Member States and China in Response to Maritime Emergencies in the Implementation of the Declaration on the Conduct of Parties in the South China Sea and look forward to the early operationalization of the other early harvest measure which is the Joint Statement on the Application of the Code for Unplanned Encounters at Sea (CUES) in the South China Sea. We took note of concerns expressed by some leaders over recent developments in the area. We reaffirmed the importance of the need to enhance mutual trust and confidence, exercising self-restraint in the conduct of activities, and avoiding actions that may further complicate the situation, and pursuing the peaceful resolution of disputes, without resorting to the threat or use of force.

121. We underscored the importance of the full and effective implementation of the Declaration on the Conduct of Parties in the South China Sea (DOC) in its entirety. We took note of the improving cooperation between ASEAN and China. We welcomed the progress to complete a framework of the Code of Conduct in the South China Sea (COC) by middle of this year, in order to facilitate the early conclusion of an effective COC. We recognized the long-term benefits that would be gained from having the South China Sea as a sea of peace, stability and sustainable development.

The ASEAN chairman’s statement is the product of “intense” lobbying by China, a diplomat earlier explained.

Sources said China did not want the Philippines to mention in its chairman’s statement Manila’s legal victory against Beijing over the South China Sea.

The Philippines won an arbitration case against China on July 12, 2016, with an arbitral tribunal in The Hague, Netherlands, striking down China’s expansive claim over the disputed waters.

China rejects this legal victory, thus its reported lobby against mentioning the ruling in the chairman’s statement.

“The lobbying is quite intense. They (China) want it further watered down,” a diplomat earlier told Agence France-Presse.

China had wanted ASEAN to remove a reference to “respect for legal and diplomatic processes” and it was taken out of the South China Sea section of the latest draft of the chairman’s statement.

Filipino diplomats said the phrase was important because “legal and diplomatic processes” encompassed the entire process of the filing of the case in the tribunal until its resolution.

On February 21, ASEAN foreign ministers also met in the Philippines and released a statement saying “a number of ministers expressed concern over recent developments and escalation of activities” in the South China Sea.

Then Philippine foreign secretary Perfecto Yasay Jr told reporters that ministers “have expressed grave concern” over the so-called “militarization” of certain areas in the disputed waters. China ended up hitting Yasay for his “baffling and regrettable” words.

Duterte has repeatedly said he will not play up the Hague ruling, at least for now, as he seeks to boost Manila’s ties with Beijing. – Rappler.com