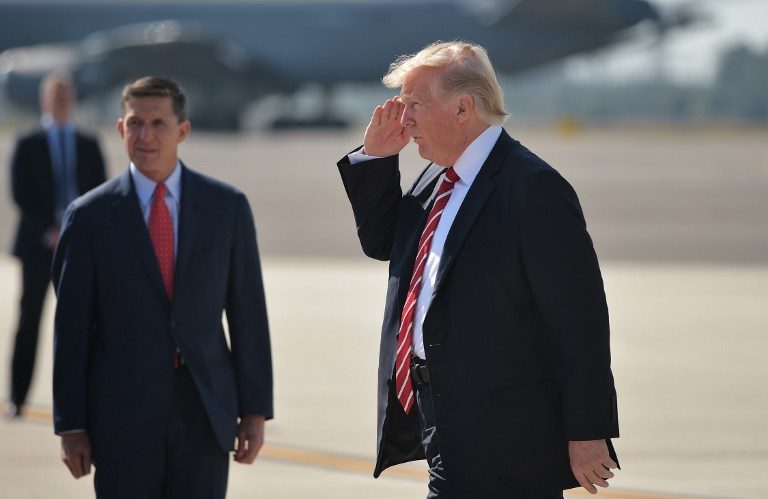 Facebook Twitter Copy URL
Copied
The latest allegation against the US president, who is also under fire for divulging top-secret information to a top Russian official, adds to a mounting perception of an administration in a perpetual state of chaos

WASHINGTON DC, USA – Donald Trump’s beleaguered White House was rocked Tuesday, May 16,  by a pair of explosive allegations – that he personally tried to quash an FBI investigation, and that he disclosed highly classified information to top Russian officials.

Either claim on its own – that he divulged top-secret information to Russian Foreign Minister Sergei Lavrov during an Oval Office meeting, or that he pressed FBI director James Comey to drop a probe into ex-national security advisor Michael Flynn – would plunge any White House into serious crisis.

But the reports – both rebutted by Trump’s team – add to a mounting perception of an administration in a perpetual state of chaos.

The paper – citing two people who read notes written by Comey – reported that when Comey met Trump the day after Flynn resigned, the president tried to halt any FBI investigation.

“I hope you can see your way clear to letting this go, to letting Flynn go,” Trump is accused of telling Comey, according to a memo written by the former FBI chief, who was sacked last week.

In a letter to acting FBI director Andrew McCabe, the Senate Oversight Committee demanded that all memos and other documents or recordings relating to communications between Trump and Comey be turned over by May 24.

“If true, these memoranda raise questions as to whether the president attempted to influence or impede the FBI’s investigation as it relates to Lieutenant General Flynn,” wrote committee Chairman Jason Chaffetz, a Republican.

The White House quickly denied any suggestion that Trump was trying to obstruct justice – a criminal offense – in his dealings with Comey.

“While the president has repeatedly expressed his view that General Flynn is a decent man who served and protected our country, the president has never asked Mr Comey or anyone else to end any investigation,” a US official said on condition of anonymity.

“The president has the utmost respect for our law enforcement agencies, and all investigations. This is not a truthful or accurate portrayal of the conversation between the president and Mr Comey.”

Trump spent much of the day trying to put to rest separate allegations that he revealed sensitive information to Lavrov and Moscow’s ambassador to Washington, arguing he acted within the law.

White House aides refused to say whether the information pertaining to the group’s bombmaking capabilities was classified.

But the president took to Twitter to insist he had the “absolute right” to share “facts pertaining… to terrorism and airline flight safety” with Russia.

Both allegations fueled calls for a special prosecutor to investigate Trump’s ties to Russia and even raised questions about whether he could face impeachment proceedings.

“The country is being tested in unprecedented ways. I say to all of my colleagues in the Senate, history is watching,” said top Senate Democrat Chuck Schumer.

The party’s number two in the Senate, Dick Durbin, said it was “one of the most serious allegations you can make against a leader – that they’re in some way trying to delay or obstruct the administration of justice.”

“The time President Trump spent sharing sensitive information with the Russians was time he did not spend focusing on Russia’s aggressive behavior,” McCain said.

The Russian intelligence scandal also threatens to corrode trust among allies who shared classified information with the United States on the understanding it would be handled within the usual guidelines.

An administration official confirmed to AFP on condition of anonymity that the original intelligence came from Israel.

Trump is scheduled to visit Israel next week – a trip that White House officials indicated would still go ahead.

“Israel has full confidence in our intelligence-sharing relationship with the United States and looks forward to deepening that relationship in the years ahead under President Trump,” said Israel’s ambassador to the US, Ron Dermer.

No security ‘lapse’ with Russia

Earlier in the day, National Security Adviser H.R. McMaster denied Trump had caused a “lapse in national security,” saying it was “wholly appropriate for the president to share whatever information he thinks is necessary to advance the security of the American people.”

McMaster also indicated that Trump could not have revealed sensitive sources or methods.

“The president wasn’t even aware where this information came from,” he said. “He wasn’t briefed on the source or method of the information either.”

Trump, himself, appeared ready to weather the storm.

“We had a very successful meeting with the foreign minister of Russia,” he told reporters firing a hail of questions at him.

“We’re going to have a lot of great success over the next coming years and we want to get as many to help fight terrorism as possible.”

Trump’s meeting with top Russian diplomats last week came one day after he took the rare step of firing Comey.

Comey had been overseeing investigations into the Trump campaign’s possible collusion with Russia to tilt the 2016 election in his favor.

“On a day when we thought things couldn’t get any worse, they have,” Schumer said. – Rappler.com