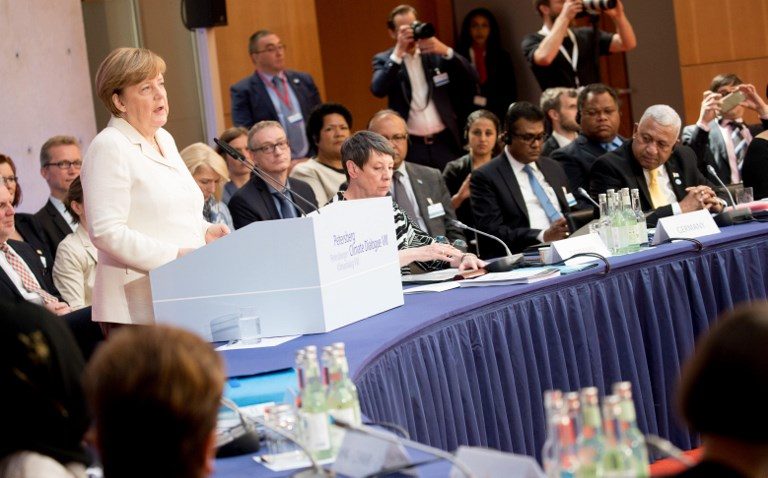 Facebook Twitter Copy URL
Copied
As the uncertainty over the US' participation in climate talks looms large, the organizers of the upcoming Bonn climate conference encourage countries to soldier on towards implementing the Paris Agreement

BERLIN, Germany – Germany and Fiji, the two countries leading the global climate negotiations this year, on Tuesday, May 23, called on the world to continue fighting climate change, despite uncertainties over the participation of the United States moving forward.

There is a need for a “global alliance” of states and various sectors in the path towards meeting the goals of the Paris Agreement on Climate Change, German Chancellor Angela Merkel said during the high-level segment of the Petersberg Climate Dialogue VIII.

The German leader said the global community already made a “decisive step” with the Paris Agreement, but even with that, the world needs to “take necessary steps and measures to implement them.”

“We need a global alliance of all states that includes and involves all areas and sectors of our society,” Merkel said.

Urging the international community to maintain “the spirit of Paris” – the 196-nation climate pact reached in late 2015 – she said: “I am still trying to convince the doubters.”

Fiji Prime Minister Josaia Voreqe Bainimarama, who is also the incoming president of the COP23, said the “elephant in the room” – which is the uncertainty over the US’ participation – presented a challenge to climate negotiations.

However, Bainimarama said, even without the US, there is “considerable power” among the dialogue’s participants, as well as other countries, for a “decisive political action” on climate.

Her speech also echoed the theme of this year’s Petersberg Climate Dialogue, which is “Working Together on Solutions,” in which she cited measures made by various countries – from mobility to energy solutions – that could be replicated in other parts of the world.

Merkel cited her own country’s efforts on “energy transition,” as well as efforts on renewables by China, India, the United Arab Emirates, Morocco and Kenya.

She said these examples show that countries can move towards climate-friendly policies and show that “prosperity and sustainability can go hand-in-hand.”

She also said the unique arrangement of Fiji’s presidency and Germany’s hosting of the COP “shines a spotlight on the most vulnerable countries,” and puts emphasis on speedy action because it is a “question of survival” for these small countries.

“If the different governments were working together and pulling towards the same direction, we would have been already in a good position,” the German chancellor said.

“If we were to act alone, we were to fight a losing battle, so we need as many countries to join in as possible,” she added. “We need a global alliance of all states that includes and involves all areas and sectors of our society.”

The doubt over the Americans taking part in future climate talks has cast a cloud over the most recent technical negotiations in Bonn, as well as in the two-day Petersberg Forum in Berlin, where 30 nations joined an informal dialogue on climate issues.

Trump on the campaign trail dismissed climate change as a “hoax” perpetrated by China and vowed to “cancel” the international pact to curb emissions from burning oil, coal, and gas.

He has not yet executed his threat, but has appointed an anti-climate litigator to lead the Environmental Protection Agency, and chosen the former CEO of oil giant ExxonMobil, Rex Tillerson, as his secretary of state.

Trump will meet other leaders of the G7 wealthy nations in Sicily, Italy on May 26-27 before Merkel hosts a G20 meeting in the northern port city of Hamburg on July 7-8.

The next global meeting on the UN Convention on Climate Change will be organized by the Pacific island state of Fiji, but hosted by the German city of Bonn on November 6-17.

Another event also cast a shadow over the Petersberg Dialogue: the deadly explosion outside the Manchester Arena the previous night (Monday, May 22), after a concert by pop star Ariana Grande, which killed at least 22 people, including children.

Most of the speakers, from Merkel and Bainimarama to the country representatives, opened their statements with words of sympathy for the victims, and vowed to support the United Kingdom in solving the incident. – with reports from Agence France-Presse / Rappler.com