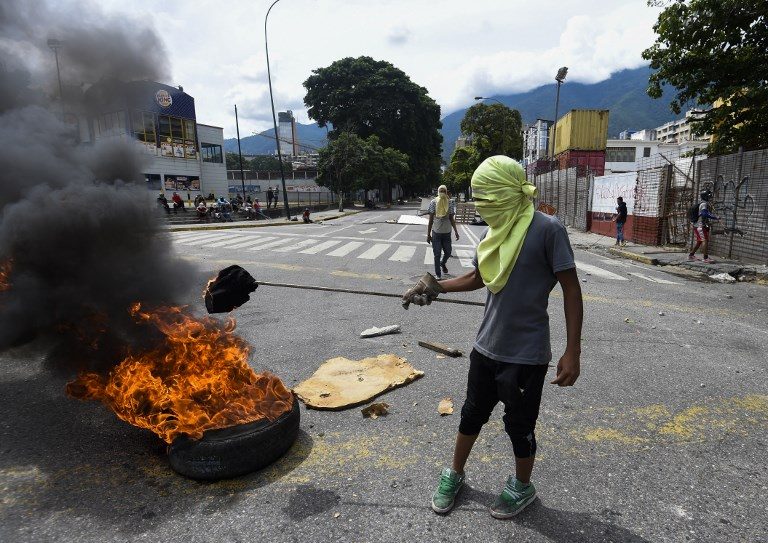 The war of words escalated on Thursday, July 27, the second day of a 48-hour general strike by Venezuelans angry over Maduro’s plans for a poll on Sunday, July 30, to elect a new body to rewrite the constitution.

“The regime declared we can’t demonstrate… We will respond with the TAKING OF VENEZUELA” through a protest on Friday, the opposition coalition, the Democratic Unity Roundtable, said on its Twitter account.

It later upped the ante, calling for protests on Saturday, July 29, and Sunday, as well.

“The whole country must tell the world this constituent assembly has no legitimacy,” opposition lawmaker Freddy Guevara said at a press conference, urging Venezuelans to “deepen the conflict” to force Maduro to abandon his plan.

Maduro countered by urging the opposition to “abandon the road to insurrection.”

He called for immediate dialogue but signaled he was not backing down. Any talks, he said, should happen “before the election and installation of the Constituent Assembly” tasked with rewriting the constitution.

Earlier, he issued a decree warning anybody taking part in protests that “could disturb or affect” Sunday’s vote risked 5 to 10 years in prison.

Four months of violent protests have already left 108 people dead, according to prosecutors. Five of them – including two minors – died in protests during the two-day strike.

Fears of open civil conflict have prompted an exodus of thousands of Venezuelans into neighboring Colombia.

International concern has mounted, with the United States, European Union, United Nations and most heavyweight Latin American nations urging Maduro to back down from his plan.

Some 70% of Venezuelans oppose plans for the constituent assembly, according to polling firm Datanalisis.

Washington has responded to Maduro’s intransigence by imposing economic sanctions on 13 current and former Venezuelan officials, freezing their US assets and forbidding American entities from doing business with them.

US Treasury Secretary Steven Mnuchin warned that the 545 members to be elected to Maduro’s constituent assembly could also face punishment.

The US on Thursday ordered relatives of embassy staff in Caracas to leave the country, and authorized employees to leave on a voluntary basis, citing “social unrest, violent crime, and pervasive food and medicine shortages.”

Venezuela’s opposition, which controls the National Assembly, has urged civil disobedience against what it terms Maduro’s dictatorship.

It is pushing on with its own strategy of trying to force Maduro from power through early elections.

Skirmishes in the street between supporters of the opposition and the Maduro government have become commonplace.

Volleys of tear gas, rubber bullets and homemade bombs arced through the air in the capital during the strike.

Barricades made from debris littered the eastern part of the city, with signs reading “No more dictatorships!”

“What happens if they impose the constituent assembly? The crisis will worsen. Where does Maduro want to take the country? To a social explosion?” asked Henrique Capriles, an opposition leader.

Protest organizers claimed 92% of businesses and workers supported the strike.

Maduro accuses Washington of fomenting unrest against him, aided by the opposition. He has increasingly relied on the Venezuelan military, which has repeatedly declared loyalty to him, to hold onto power.

The opposition, bolstered by an unofficial vote on July 16 that saw a third of the electorate reject Maduro’s plan, has called for an election boycott.

At the same time, Maduro’s administration is being squeezed by the long-running economic crisis.

The oil export-dependent economy will shrink 12% this year, after a contraction of 18% last year, the International Monetary Fund said.

Inflation is projected to top 720%.

Venezuela’s currency reserves have dwindled to under $10 billion as the government keeps up debt repayments at the expense of imports to stave off a devastating default.

The country’s isolation increased as more airlines cut service to and from Venezuela.

US airline Delta is also expected to suspend services from September. The company declined to comment on the move. – Rappler.com