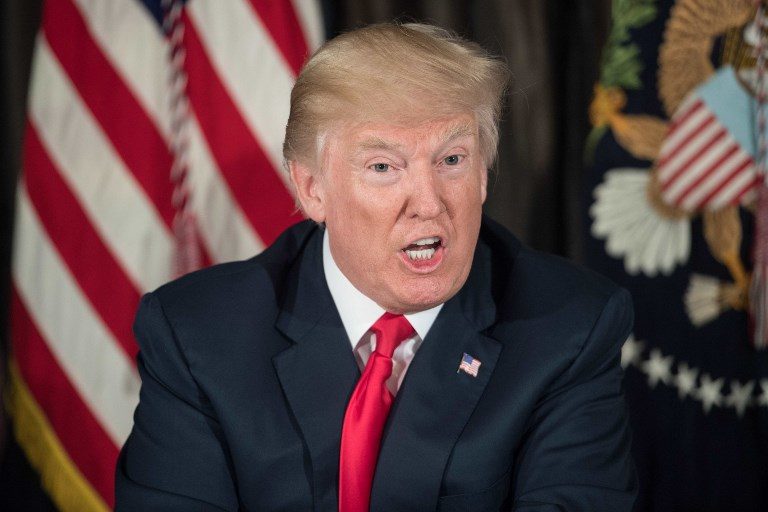 Facebook Twitter Copy URL
Copied
Donald Trump retweets a message from a man who called him a 'fascist.' It took Trump about 20 minutes to delete it.

NEW YORK, USA –  President Donald Trump likes to tweet early in the morning – often while watching television. But on Tuesday, he may have hit the button a bit too quickly.

From Trump Tower in New York, where he is spending a few days, the Republican leader retweeted a message from a man who called him a “fascist.” It took him about 20 minutes to delete it.

The man was replying to a Fox News tweet about the possibility that Trump could issue a pardon to Joe Arpaio, the former Arizona sheriff who has courted controversy – and earned a conviction – over his tough stance on immigrants.

“He’s a fascist, so not unusual,” tweeted Mike Holden, referring to the 45th president.

Not long after, Trump retweeted the message to his more than 35 million followers.

He then added this ironic description to his Twitter profile: “Officially Endorsed by the President of the United States. I wish that were a good thing.”

Trump had another Twitter mishap early Tuesday, retweeting – and also deleting – a drawing showing a CNN journalist crushed by the “Trump Train.”

The missteps come at a delicate moment for the American president, who has been sharply criticized for his initial failure to explicitly condemn a weekend rally by white supremacists in Virginia that ended in bloodshed.

On Monday, Trump eventually denounced racism as “evil” and singled out the Ku Klux Klan and neo-Nazis as “criminals and thugs” – but not before Republicans and Democrats alike lamented that it took him two days to do so. – Rappler.com