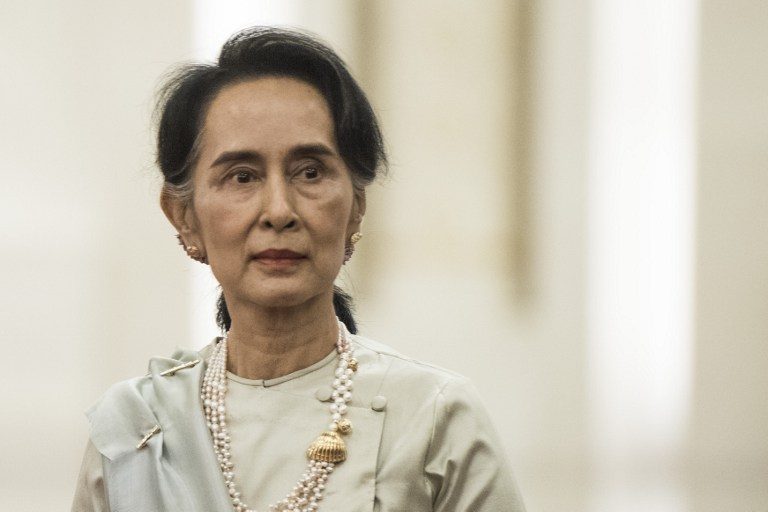 YANGON, Myanmar – Myanmar’s leader Aung San Suu Kyi will address the crisis engulfing Rakhine state next week, in her first speech since scores were killed in violence that has sent nearly 380,000 Rohingya Muslims fleeing to Bangladesh and battered her reputation as a defender of the downtrodden.

In a press conference government spokesman Zaw Htay said Suu Kyi will “speak for national reconciliation and peace” in a televised address on September 19.

He said the Nobel laureate, who has been pilloried by rights groups for failing to speak up in the defence of the Rohingya minority, would skip the United Nations General Assembly next week to tackle the crisis unfurling at home.

The violence has incubated a humanitarian crisis on both sides of the border and piled intense global pressure on Suu Kyi to condemn the army campaign, which the UN has described as having all the hallmarks of “ethnic cleansing”.

She is needed in Myanmar to “manage humanitarian assistance” and “security concerns” caused by the violence, as competing rumors ratchet up anti-Muslim rhetoric across the Buddhist-majority country.

A crackdown by Myanmar’s army, launched in response to Rohingya militant attacks on August 25, has pushed hundreds of thousands of Rohingya refugees to Bangladesh.

Dhaka is struggling to provide relief for exhausted and hungry refugees – some 60 percent of whom are children – while nearly 30,000 ethnic Rakhine Buddhists as well as Hindus have been displaced inside Myanmar.

Nine thousand more Rohingya refugees poured into Bangladesh on Wednesday, the UN said, as authorities worked to build a new camp for tens of thousands of arrivals who have no shelter.

Suu Kyi, Myanmar’s first civilian leader in decades, has no control over the powerful military, which ran the country for 50 years before allowing free elections in 2015.

There is also scant sympathy among Myanmar’s Buddhist majority for the Rohingya, a stateless Muslim group branded “Bengalis” – shorthand for illegal immigrants.

But outside of her country Suu Kyi’s reputation as a defender of the oppressed is in ruins over the Rohingya crisis.

Rohingya refugees have told chilling accounts of soldiers firing on civilians and razing entire villages in northern Rakhine state with the help of Buddhist mobs.

The army denies the allegations, while Suu Kyi has also played down claims of atrocities, instead blaming “a huge iceberg of misinformation” for complicating the conflict.

The UN Security Council was scheduled later Wednesday to discuss the refugee crisis in a closed-door meeting, with China expected to shoot down any efforts to censure its strategically pivotal Southeast Asian ally.

Suu Kyi, a Nobel Peace Prize winner garlanded for her dignified and defiant democracy activism under Myanmar’s former junta, was once the darling of the international community.

She made her debut before the UN assembly last September, winning warm applause for a speech delivered months after she became Myanmar’s first civilian leader following a decades-long democracy struggle under the former junta.

In it she vowed to find a solution to long-running ethnic and religious hatred in Rakhine “that will lead to peace, stability and development for all communities within the state”.

In a sign of how far Suu Kyi’s star has fallen since, the same rights groups that campaigned for her release from house arrest have blasted her for failing to speak up in defence of the Rohingya.

Sympathisers say her hands are tied by the army, which still runs a chunk of the government and has complete control over all security matters.

But fellow Nobel laureates have lined up to condemn her silence, with Archbishop Desmond Tutu calling it “incongruous for a symbol of righteousness to lead such a country”.

While the US and other Western powers have criticised the military campaign, Beijing on Tuesday offered Myanmar support saying the country was entitled to “safeguard” its stability.

Human Rights Watch’s Phil Robertson urged the council to pass a “global arms embargo” on Myanmar’s military, but said he expected China to to water down any reaction.

The 1.1-million strong Rohingya have suffered years of discrimination in Myanmar, where they were stripped of their citizenship despite having long roots in the country.

Bangladesh does not want the group either, though it is providing the refugees with temporary shelter.

Many Rohingya died making the perilous journey across the border, with nearly 100 drowning in boat trips across the Naf river that divides the two countries.

Bangladeshi authorities want to establish a 2,000-acre camp close to Myanmar’s border to house around 250,000 Rohingya and are also planning to build facilities on a flood-prone island. – Rappler.com