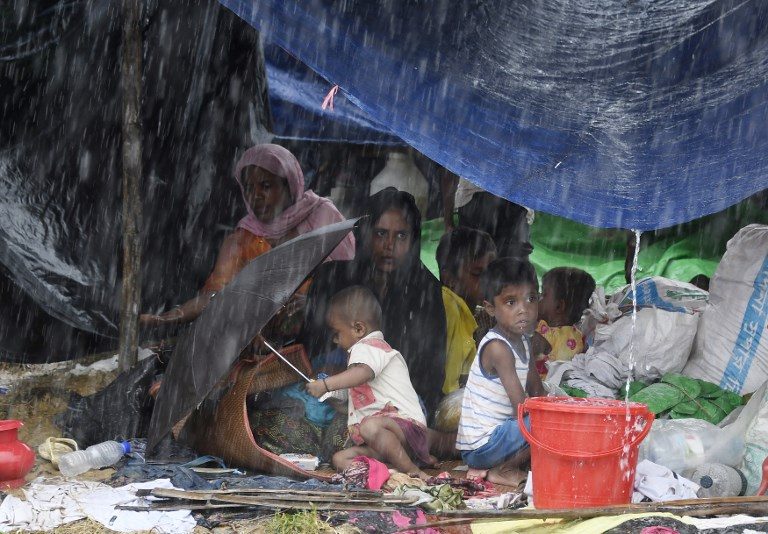 Facebook Twitter Copy URL
Copied
Suu Kyi's refusal so far to defend the Rohingya over nearly a month of violence has baffled and enraged an international community, but inside Myanmar, supporters say the 72-year-old lacks authority to reign in the army

YANGON, Myanmar – Myanmar leader Aung San Suu Kyi is poised Tuesday, September 19, to break her near-silence on communal violence scorching through Rakhine state, in a televised speech on a Rohingya refugee crisis that has shocked the world and prompted the UN to accuse the country’s army of ethnic cleansing.

Suu Kyi’s refusal so far to defend the Rohingya over nearly a month of violence has baffled and enraged an international community that once feted her as the champion of Myanmar’s democracy struggle.

But inside Myanmar, supporters say the 72-year-old lacks authority to reign in the army, which stands accused of waging a campaign of murder and arson that has driven more than 410,000 Rohingya from their homes.

The violence erupted in late August when the army retaliated against co-ordinated attacks by Rohingya militants.

Since then just under half of Rakhine’s Rohingya population has poured into Bangladesh, where they now languish in one of the world’s largest refugee camps.

A further 30,000 ethnic Rakhine Buddhists as well as Hindus have also been displaced – apparent targets of the August 25 attacks by the Arakan Rohingya Salavation Army (ARSA) militant group.

Nobel laureate Suu Kyi has been decried overseas for failing to condemn the generals, with whom she is in a delicate power-sharing arrangement.

With global pressure cranked high, Suu Kyi has skipped the UN General Assembly in New York to manage the crisis at home and deliver her televised address – the biggest yet of her time in office.

“She is going to tell the world the real truth,” her spokesman Zaw Htay told reporters ahead of the speech scheduled for 0330 GMT.

But analysts say she faces the treacherous task of walking the line between global outrage and Islamaphobic anti-Rohingya views at home, where there is broad support for the army’s campaign.

While desperate scenes of weary and hungry Rohingya civilians streaming into Bangladesh have dominated global headlines, there is little sympathy for the Muslim group among Myanmar’s Buddhist majority.

Many reject the existence of a Rohingya ethnicity and insist they are ‘Bengalis’ – illegal immigrants from Bangladesh.

On Monday several hundred people gathered in downtown Yangon to rail against the UN, international NGOs and foreign media, as a siege mentality grows inside Myanmar.

“I want Daw Aung San Suu Kyi to stand for the ethnic people of Myanmar and to remove the pressure from the international community by giving the speech tomorrow,” demonstrator Khin Khin Myint told Agence France-Presse.

Tensions over the status of the Rohingya have been brewing for years in Myanmar, with bouts of anti-Muslim violence erupting around the country as Buddhist hardliners fan fears of an Islamic takeover.

When she makes her address on Tuesday, Suu Kyi must also tread carefully around a military that still looms large in the fragile democracy.

Although the army stepped down from junta rule in 2011, it kept control of security policy and key levers of government.

Any overt break from the army’s policy in Rakhine could enrage the generals and derail Suu Kyi’s efforts to prevent a rollback on recent democratic gains. – Rappler.com