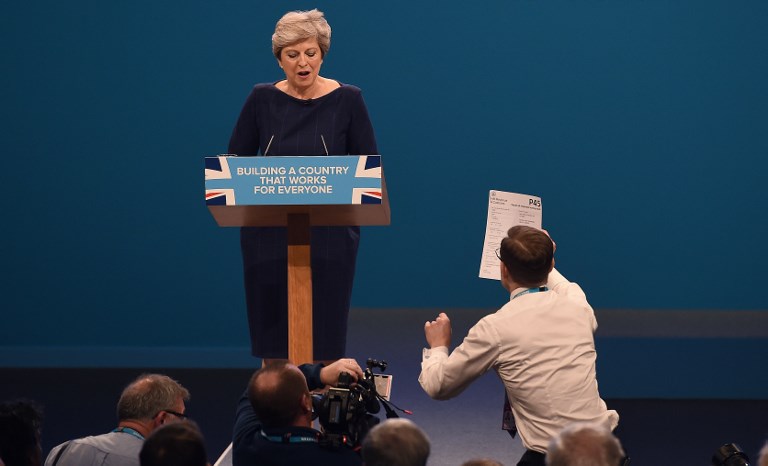 MANCHESTER, United Kingdom – British Prime Minister Theresa May’s speech at her Conservative Party’s annual conference on Wednesday, October 4, was interrupted by a serial prankster handing her an unemployment notice – and then by her own repeated coughing.

Comedian Lee Nelson, whose real name is Simon Brodkin, walked up to the stage and gave May the form, known in Britain by its reference code P45.

He claimed Foreign Secretary Boris Johnson, who has clashed with May over Brexit, told him to do it.

“Boris said in one of those corridor meetings: ‘Give Theresa this’. It was a P45 of course, from Boris,” he told reporters as he was escorted from the conference centre in Manchester, northwest England.

“Hi Boris Johnson, I gave Theresa her P45 just like you asked,” he later wrote on Twitter.

Delegates chanted “Out! Out!” as he was ushered away and there were big cheers when he left the auditorium.

Brodkin has a track record of pulling off such stunts.

He once threw a pile of fake dollars at the then world football chief Sepp Blatter during a press conference.

May seemed unruffled by the interruption, which came just as she was turning to speak about the opposition Labour leader.

“I was about to talk about someone I want to give a P45 to: Jeremy Corbyn,” she said to a standing ovation.

May’s speech was later repeatedly halted by coughing fits, for which finance minister Philip Hammond gave her a sweet. – Rappler.com