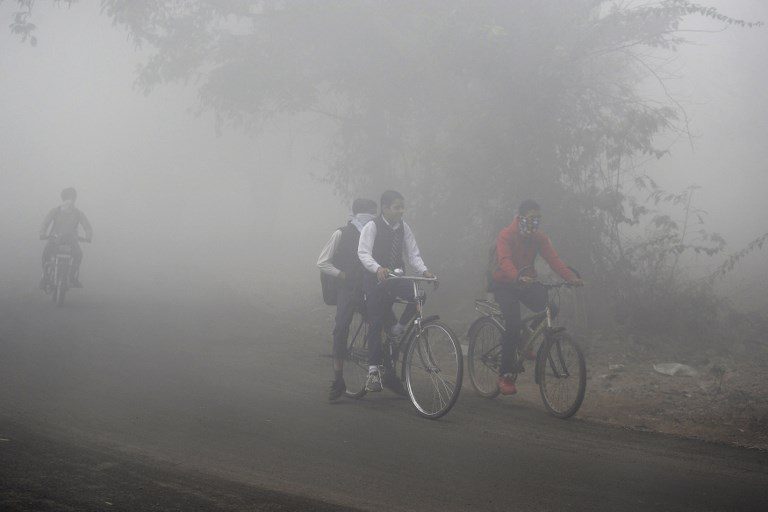 NEW DELHI, India – A public health emergency was declared as choking smog blanketed New Delhi on Tuesday, November 7, with authorities ordering the temporary closure of all primary schools in the world’s most polluted capital city.

The US embassy website said levels of the fine pollutants known as PM2.5 that are most harmful to health reached 703 — well over double the threshold of 300 that authorities class as hazardous. Local authorities are warning of worsening conditions in the coming days.

The Indian Medical Association declared a public health emergency as it urged city administrators “to make every possible effort to curb this menace”.

“We have decided to shut schools up to primary level for a day, and will evaluate the situation on an hourly basis to see if such a closure needs to be extended,” he told reporters.

Almost 2 million students are enrolled in primary schools in Delhi, according to government data from 2015.

All outdoor activities have also been banned across the capital’s 6,000 schools while pollution levels remain at severe levels, Sisodia said.

The World Health Organization in 2014 classed New Delhi as the world’s most polluted capital, with air quality levels worse than Beijing.

Since then authorities have closed power plants temporarily and experimented with taking some cars off the road.

But on Tuesday many residents said too little was being done to tackle the scourge.

Low visibility caused by the smog forced the closure of one of the runways at Delhi airport, delaying some flights.

Delhi’s air quality typically worsens ahead of the onset of winter as cooler air traps pollutants near the ground, preventing them from dispersing into the atmosphere, a phenomenon known as inversion.

India’s Central Pollution Control Board said high levels of moisture in the air and a lack of wind meant emissions had become trapped in the environment.

Firecrackers set off to celebrate the Diwali festival of lights in the city add to the toxic mix created by pollution from diesel engines, coal-fired power plants and industrial emissions.

The problem is further exacerbated by the burning of crop stubble by farmers after the harvest in northern India, a practice that remains commonplace despite an official ban.

The Environment Pollution Agency, tasked by India’s top court to tackle air pollution, warned “things are expected to get much worse in the coming days.”

Across the border in neighboring Pakistan, residents of the eastern city of Lahore, some 400 km (250 miles) from Delhi, also complained of stifling smog.

The haze has caught Pakistanis off guard, with concerned citizens saying it is only the second year that Lahore has seen such high levels of pollution and officials unable to provide accurate data.

“I feel pain,” said Muhammad Siddique, who spoke to AFP from his motorbike in the middle of a Lahore traffic jam where he said he found it difficult to breathe and that his bloodshot eyes were stinging.

The IMA had earlier called for an upcoming half marathon to be cancelled, saying the health consequences for runners could be “disastrous”.

Running in such conditions could trigger asthma attacks, worsen lung conditions and increase the risk of heart attacks and strokes, it said.

On Monday, November 6, telecoms giant Airtel threatened to pull its sponsorship of the event, due to be held on November 19, if authorities failed to improve the situation.

A report in the Lancet medical journal last month said pollution had claimed as many as 2.5 million lives in India in 2015, the highest in the world.

“This is the state of air quality this morning in Delhi-NCR! Horrific!” posted one resident beside a picture of thick smog. – Rappler.com