Trump lands in China for talks on North Korea 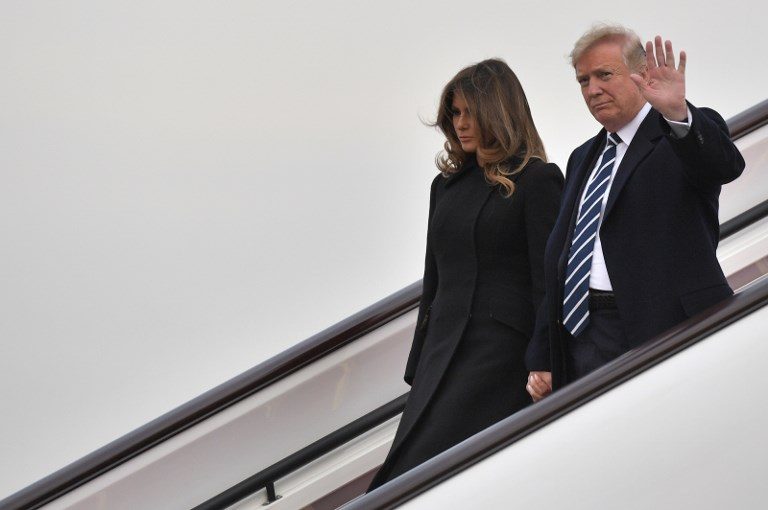 Facebook Twitter Copy URL
Copied
US President Donald Trump arrives in Beijing for the critical leg of his Asia tour to drum up an uncompromising, global front against the nuclear weapons ambitions of North Korea

BEIJING, China – US President Donald Trump arrived in Beijing Wednesday, November 8, for the critical leg of his Asia tour to drum up an uncompromising, global front against the nuclear weapons ambitions of the “cruel dictatorship” in North Korea.

Trump heaped more praise on Chinese President Xi Jinping before touching down in Beijing but he also used a speech in Seoul to urge China to do more to rein in its Cold War-era ally.

The Trump administration sees Beijing as the key to controlling North Korea, which depends on China for its economic survival and for 90% of its trade.

Earlier, Trump congratulated Xi for his reappointment as China’s Communist Party chief, tweeting: “I very much look forward to meeting with President Xi who is just off his great political victory”.

Trump’s use of the term “political victory” for the outcome of last month’s Communist Party congress was seen by analysts as an attempt to mollify Xi before tough talks on trade and North Korea.

“He’s laying it on thick to put Xi in a good mood because he will have unpleasant things to tell him,” said Jean-Pierre Cabestan, China politics specialist at Hong Kong Baptist University.

After US allies Japan and South Korea gave the red-carpet treatment to Trump, Xi will offer him an extravagant “state visit-plus” with a tour of the Forbidden City, a military honour guard and a lavish banquet.

Trump has brought a business delegation along for the ride, with deals expected to be signed between the two countries, though analysts doubt that it will do much to allay US concerns about China’s massive trade surplus.

Hours earlier in an address to the South Korean parliament, Trump painted a dark picture of Pyongyang as an oppressive, despotic regime.

“North Korea is a country ruled as a cult,” the US leader declared.

“At the centre of this military cult is a deranged belief in the leader’s destiny to rule as parent protector over a conquered Korean peninsula and an enslaved Korean people.”

South Korean lawmakers applauded as the US president, whose tour of Asia has been dominated by fears over the nuclear-armed North, vowed not to be intimidated and warned Pyongyang it should not test American resolve.

The North carried out its sixth, and most powerful, nuclear test in September, and has fired dozens of missiles in recent months.

Two have overflown Japan, and Pyongyang says it can mount a nuclear warhead on a rocket with the US mainland within range.

“We will not permit America or our allies to be blackmailed or attacked,” Trump said.

Trump gave a preview of what he will ask Beijing to do regarding North Korea.

“You cannot support, you cannot supply, you cannot accept,” he said, urging China and Russia to fully implement UN sanctions, downgrade diplomatic ties, and sever all trade and technology ties.

At the start of the day Trump abandoned a surprise visit to the Demilitarized Zone (DMZ) that divides the two Koreas because of bad weather, leaving him “pretty frustrated” according to the White House.

South Korean President Moon Jae-In, who had flown earlier before fog closed in, was left waiting for him at the border, which bristles with electric fences, minefields and anti-tank barriers.

In his speech, Trump described the DMZ as “the line that today divides the oppressed and the free”, where “the flourishing ends, and the prison state of North Korea sadly begins”.

The Kim dynasty has ruled the impoverished, isolated North with an iron fist and pervasive personality cult for three generations, showing no tolerance for political dissent.

The regime has for decades been criticized for a range of rights abuses including torture, rape and execution of perceived critics or those trying to flee the country.

It is also known to operate prison camps where hundreds of thousands languish under forced labour, and its 25 million people are barred from contact with the outside world such as foreign television or internet access.

While Trump condemned the authorities, he also made overtures to leader Kim Jong-Un, who has overseen rapid advances in its weapons technology.

In what he said was a direct message to the country’s young leader, he told him: “North Korea is not the paradise your grandfather envisioned. It is a hell that no person deserves.”

“Yet despite every crime you have committed against God and man, we will offer a path towards a much better future.”

It would have to begin, though, with the North stopping ballistic missile development, Trump said, and “complete verifiable and total denuclearization”.

Analysts said the speech could go down badly in Pyongyang, which is particularly sensitive to criticism of its leaders.

Labelling Kim a “cruel dictator” could be “enough to provoke North Korea because the North Korean system puts the most importance on the dignity of its leadership”, said Yang Moo-Jin from Seoul’s University of North Korean Studies. – Rappler.com