Rajoy in Barcelona for first Catalonia visit since direct rule 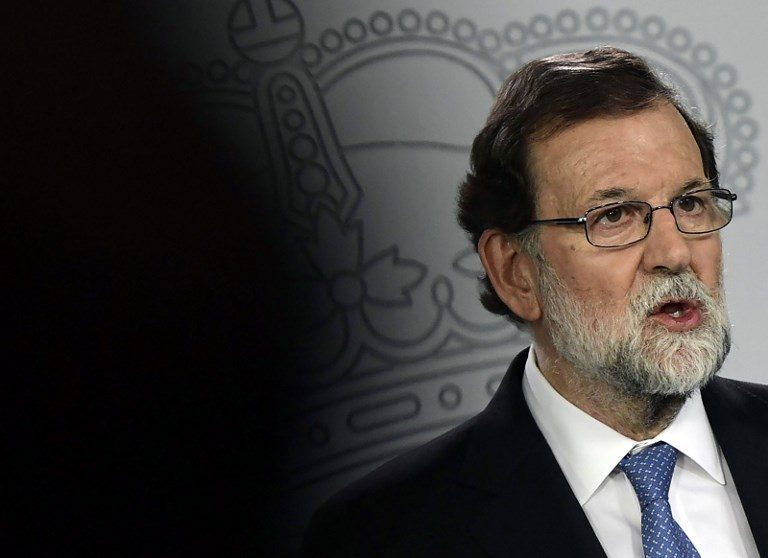 Facebook Twitter Copy URL
Copied
His visit comes two weeks after he dismissed Catalan leader Carles Puigdemont, his government and the parliament, suspended the region's autonomy and called for new elections there

BARCELONA, Spain – Spanish Prime Minister Mariano Rajoy will on Sunday, November 12, visit Catalonia for the first time since Madrid imposed direct rule on the region, a day after hundreds of thousands of Catalans marched to demand the release of jailed regional officials.

Mariano Rajoy is expected in Barcelona, the Catalan capital, at 11 am (1000 GMT) to show support for his Popular Party’s campaign ahead of a vote next month.

His visit comes two weeks after he dismissed Catalan leader Carles Puigdemont, his government and the parliament, suspended the region’s autonomy and called for new elections there on December 21.

On Saturday, November 11, hundreds of thousands of Catalans protested the jailing of regional officials for their push for independence from Spain, which has left the country mired in a political crisis.

The demonstrators gathered on an avenue next to the regional parliament building waving Catalan independence flags and chanting “Freedom!” while some held up banners announcing: “SOS Democracy”.

Rajoy, who is due to attend a presentation by a party candidate at a station hotel, will not make a public appearance in the city.

The protest followed the release from jail of the region’s parliament speaker – one of dozens of lawmakers sacked by Madrid last month – after posting 150,000 euros ($175,000) bail.

Barcelona municipal police put turnout for the march at some 750,000 people as crowds stretched for more than 15 blocks along the boulevard.

The Catalonia crisis has caused concern in the European Union as the bloc deals with Brexit and uncertainty over the fate of the region’s 7.5 million people. More than 2,400 businesses have moved their legal headquarters elsewhere.

On Wednesday, November 8, a general strike called by a pro-independence union caused travel chaos, blocking 60 roads and train lines including Spain’s main highway link to France and the rest of Europe.

Since lawmakers in Catalonia – a wealthy region with its own language and distinct culture – declared independence on October 27 following a banned referendum, pro-separatist officials have come under huge pressure from Madrid.

“They’ve provoked tensions and carried out a unilateral independence declaration which the majority do not want,” Ada Colau told a meeting of her party members.

“They’ve tricked the population for their own interests.”

Eight members of the axed Catalan cabinet are currently detained on charges of sedition, rebellion and misuse of public funds.

Puigdemont is in self-imposed exile in Belgium awaiting a hearing on possible extradition back to Spain after Madrid issued an EU-wide warrant.

“The situation is sad, the politicians haven’t done their jobs,” said Robert Muni, who was protesting with his children, although some protesters shouted their support for Puigdemont, “our president”.

Puigdemont and 4 ex-ministers say they are in Brussels because they cannot be guaranteed a fair trial back home.

“Although some of us are far away from you and others are in prison, we have an opportunity to express loudly and clearly that we want freedom and democracy,” Puigdemont told Catalan television.

“We don’t know what’s going to happen but we know what we want: the release of political prisoners,” said demonstrator Maria Angels Quintana.

Puigdemont has said he travelled to Brussels after declaring independence in order to raise international awareness on the treatment of separatists in Spain.

But the European Union, nervous that Catalan independence could stir up separatist tensions in several member states, has repeatedly backed the government of Prime Minister Mariano Rajoy over the crisis.

Some participants at the rally betrayed their frustration at the lack of support from Brussels for their cause, holding banners printed in English asking “Europe, where are you?” – Rappler.com