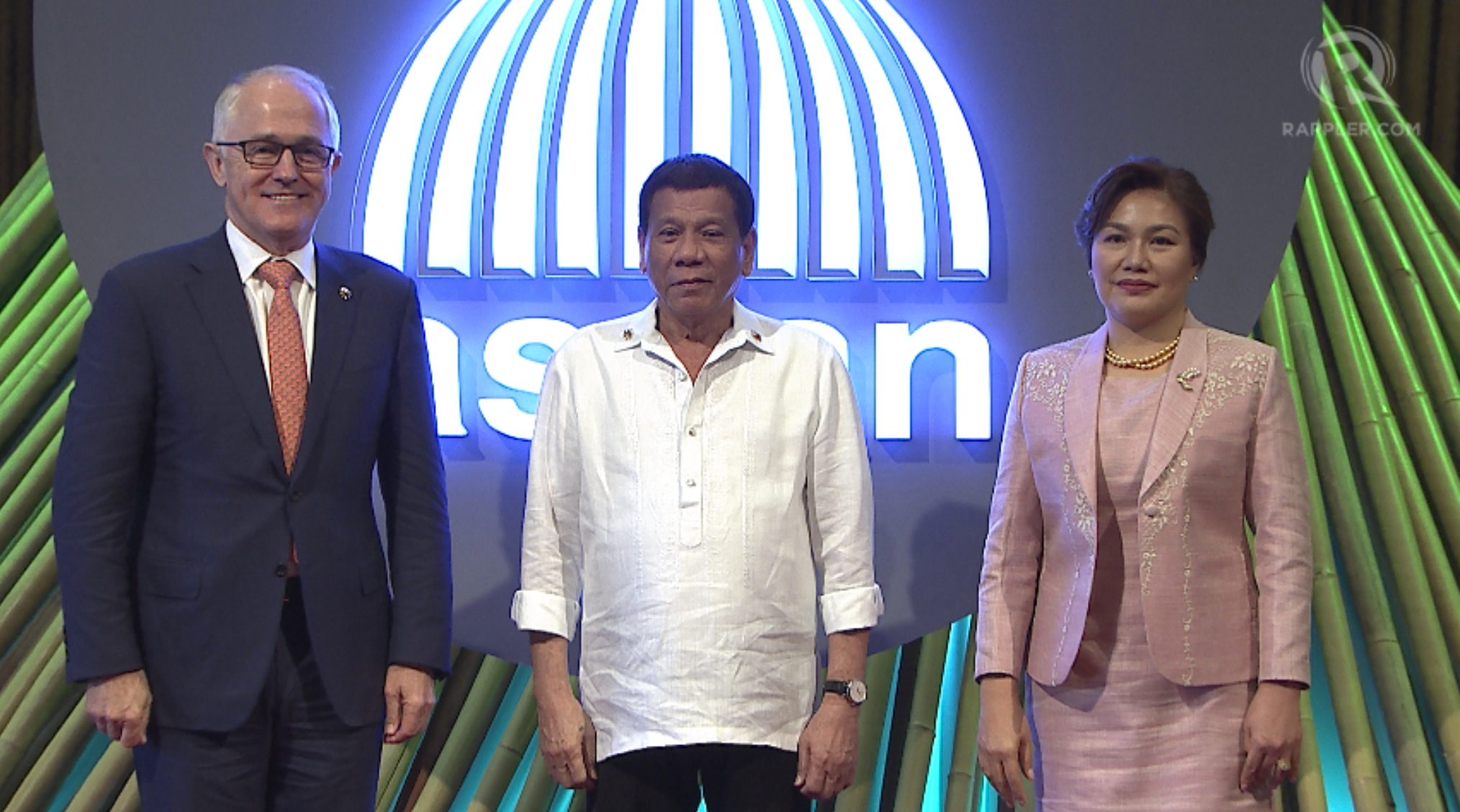 MANILA, Philippines – Australian Prime Minister Malcolm Turnbull’s recent visit to the Philippines saw him discuss global and regional concerns with world leaders despite his own troubles back home.

While Australia grappled with the loss of several parliament members due to citizenship issues, Turnbull flew to the Philippines to attend the 31st Association of Southeast Asian Nations (ASEAN) Summit as a dialogue partner.

Turnbull arrived in the Philippines past 4 pm on Sunday, November 12. By 10 pm, he was already in his bilateral meeting with Philippine President Rodrigo Duterte. The Australian prime minister reportedly praised Duterte for his stance on the South China Sea dispute. The two also talked about piracy in the Sulu Sea, regional trade, and the Marawi conflict, where Turnbull congratulated the Philippine president for liberating the city from terrorists.

The Marawi siege was also the topic during Turnbull’s official events the next day, November 13.

At the Department of Social Welfare and Development (DSWD) National Resource Operations Center on Monday afternoon, Turnbull gave his commitment to help Filipinos “win the peace” after Australia provided assistance with the war in Marawi. 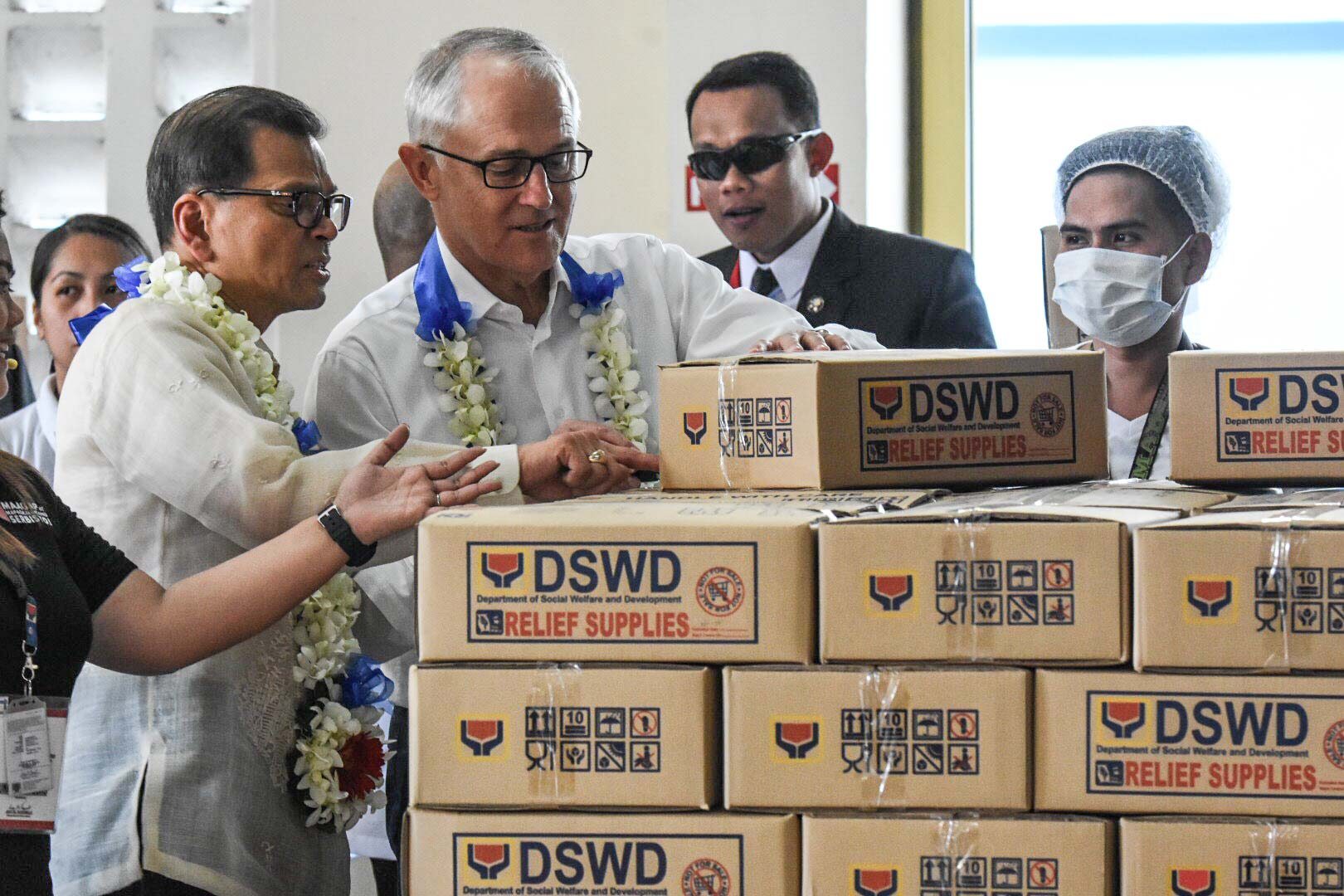 He also announced the delivery of AUD1.5 million (P60 million) worth of prepositioned relief supplies and associated funds to support the Philippine government’s response to humanitarian crises, including the Marawi conflict.

After his DSWD visit, Turnbull went to Camp Aguinaldo to witness a war game between troops of the Australian Defense Force (ADF) and their counterparts in the Armed Forces of the Philippines (AFP).

There he also met with Philippine security officials to commit to stronger cooperation in fighting terrorism in the region. He said countries “cannot afford” to let terrorists, particularly the international terrorist network Islamic State (ISIS), “have a foothold anywhere else, let alone in our region.”

“Everything is connected – Syria, Iraq, the Philippines, Indonesia, and the Straits of Australia. We are all connected,” Turnbull said.

Meetings with other world leaders

During Turnbull’s trilateral meeting with Trump and Abe, the 3 leaders not only confirmed “the unshakable bonds of the Japan-US-Australia” relationship, but also “affirmed their ongoing close coordination based on their shared understanding of the importance of using every possible means to raise pressure on North Korea to the maximum possible extent, including by fully enforcing UN Security Council resolutions.”

According to Japan Today, Turnbull said the 3 countries share “the same values and the same focus in ensuring that the North Korean regime comes to its senses and stops its reckless provocation of threats of conflict in our region.”

Turnbull also had separate meetings with both leaders. During his bilateral meeting with Abe, the two talked about strengthening a free and open order in the Indo-Pacific region, working together on regional matters such as maritime security, and coordinating with each other regarding the Trans-Pacific Partnership trade deal.

Meanwhile, Turnbull discussed terrorism and the fight against ISIS during his one-on-one with Trump, Australia’s Sky News reported.

On Tuesday, November 14 – Turnbull’s last day in the Philippines – he met with Modi to talk about increased economic cooperation, security, and counter-terrorism.

According to Sky News, Turnbull also had the chance to express his concern about the Rohingya refugee crisis with Suu Kyi on the sidelines of the East Asia Summit also held in Manila.

But Turnbull seemed to have missed the opportunity to discuss the issue of the Manus Island refugees with Trump and New Zealand Prime Minister Jacinda Ardern.

The New Zealand Herald reported that Turnbull snubbed Ardern’s request for a more “substantive” discussion on the latter’s offer to take 150 refugees from Manus Island. – Rappler.com