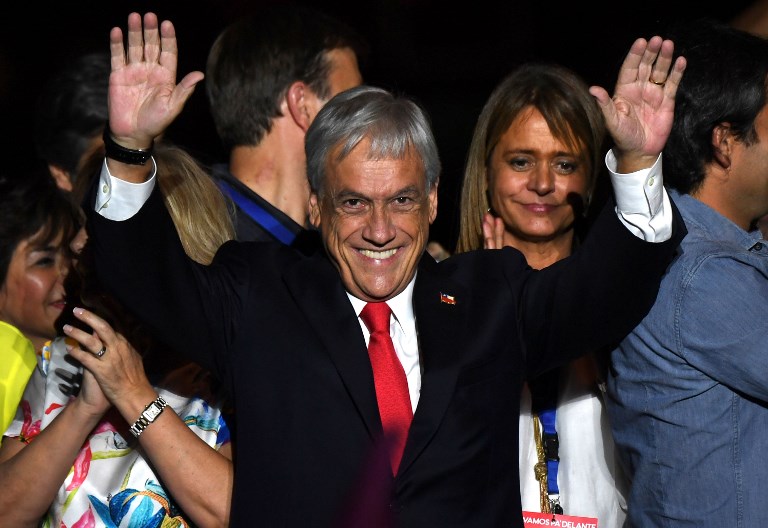 Electoral authorities said the 68-year-old conservative, who previously led the South American nation from 2010-2014, had 55% of the vote, with 98% of ballots counted.

“We have suffered a tough defeat,” Guillier said. He called for the opposition to “defend” reforms started under Bachelet.

He said Piñera walked away with “a solid and impeccable triumph.”

Piñera will lead the country – the world’s top copper producer – for 4 years starting in March 2018.

He will once again take over from Bachelet, who was barred by the constitution from running for re-election. 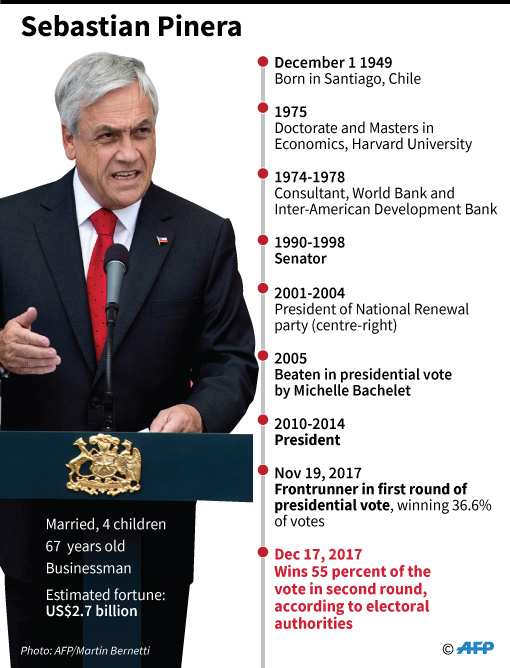 Bachelet and Piñera have tag-teamed the presidency since Bachelet first took office in 2006. Since then, they have alternated in power, switching Chile’s politics between center-left and center-right each time.

Piñera supporters were gathered outside his election headquarters in anticipation of his victory speech.

The outcome of the runoff had been far from certain after Piñera scored a much lower than expected 37% in the first round of the election held November 19.

Analysts had speculated that Guillier could bolster his 22% from that round by getting votes from other leftist candidates who were defeated.

But in the end, most voters appeared to come down in favor of the experience of Piñera, who is worth about $2.7 billion and painted himself as a safe pair of hands for Latin America’s fifth-biggest economy.

Voting had taken place under a somber cloud Sunday, following the deaths of 11 people and the disappearance of 15 others in a mudslide in a southern town.

The picturesque village of Villa Santa Lucia was unable to vote in the runoff.

Both candidates had projected confidence, with Piñera stating as he cast his ballot: “I have the firm conviction that we are going to win these elections and that better times are going to come for all Chilean households.”

With no recent reliable voter surveys in the weeks before Sunday’s runoff, however, the outcome had been seen as wide open.

Marco Moreno, of Central University, had called it “the most uncertain election since the return of democracy” after the end of Augusto Pinochet’s dictatorship in 1990.

Although copper exports, which contribute greatly to Chile’s wealth, are increasing thanks to demand from China and from the burgeoning manufacture of electric cars, the country is struggling relative to previous years.

Its GDP, a key measure of economic performance, is forecast to expand a modest 1.4% this year, the slowest pace in eight years. Forecasts suggest it will grow 2.8% next year.

Piñera and Guillier also promised to expand free university tuition brought in under Bachelet – a measure with historical resonance in Chile because paid tuition was introduced under Pinochet’s 1973-1990 rule.

For Piñera, the vow was a U-turn, contradicting an earlier statement he had made that “free things mean less commitment.”

The president-elect was often accompanied by his wife Cecilia Morel while campaigning, and also by their four children and several of their nine grandchildren.

Their presence softened his public character, according to a member of his entourage who requested anonymity.

As much as he is known as a demanding businessman – who had to divest investments including an airline and a football team for his first mandate – he also has a reputation for being cultivated, humorous and full of ideas.

He hasn’t hidden his wealth, even wearing an ostentatious watch in the red of his campaign color. But he has also sought to project an image of someone concerned about injustice and ordinary people. – Rappler.com