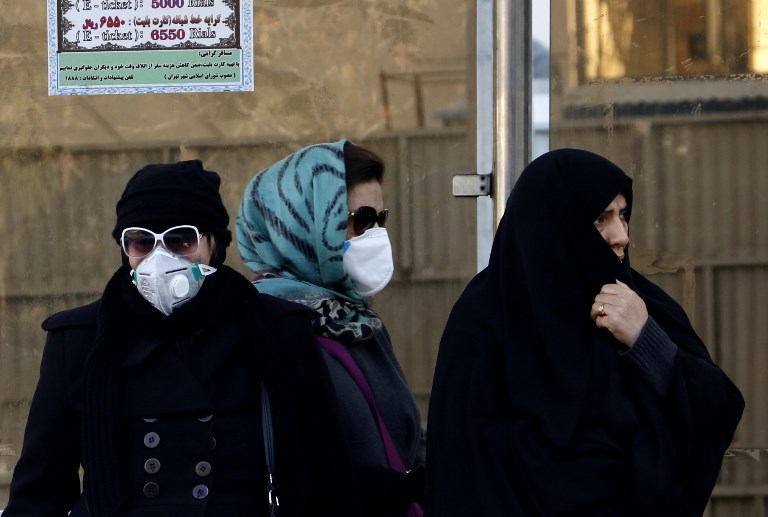 The authorities shuttered primary schools in the province of Tehran, home to 14 million residents, before ordering them to remain closed on Monday, December 18.

All sports competitions set for Monday were also cancelled, as restrictions on road traffic were stepped up, including a ban on trucks.

Airborne concentration of fine particles (PM2.5) hit 185 microgrammes per cubic metre in the south of Tehran and 174 in its center on Sunday morning, local authorities said.

That is far above the World Health Organization recommended maximum of 25 microgrammes per m3 over a 24-hour period.

The microscopic particles lodge deep in the lungs and are harmful to human health.

“Tehran is suffocating (but) hundreds of thousands of cars are built each year,” said Hossein, a man in his sixties who did not give his surname.

Every year, Iran’s sprawling capital suffers some of the worst pollution in the world when cool temperatures cause an effect known as “temperature inversion”.

The phenomenon creates a layer of warm air above the city that traps pollution from its more than eight million cars and motorbikes.

Authorities also ordered mines and cement factories to close, and called on the elderly, children, pregnant women and people with heart problems to stay indoors.

Residents who ventured out wore face masks while others chose to remain at home.

Ali Ebrahimian, a retiree, told AFP he only stepped outside to sort out “an urgent matter”.

Fatemeh Assadi, a woman in her sixties, accused the authorities of failing to prevent the pollution.

“The government’s not doing anything,” she said.

Iran is expected to produce 1.5 million new vehicles by the end of this Persian year which ends in March, according to official figures, in a country where some 20 million cars and trucks are already on the roads.

In October, Tehran mayor Mohammad Ali Najafi said he wanted to develop public transport and help reduce traffic in the capital, which lies at between 1,400 and 1,800 meters above sea level.

But he warned that a solution would take time.

In the northwestern cities of Tabriz and Urmia, schools remained closed for the second day straight on Sunday, official news agency IRNA said.

While atmospheric pollution in Iran is not as severe as in India or China, it endangers the health of its residents.

In 2014, almost 400 people were hospitalized with heart and respiratory problems caused by pollution in Tehran. Nearly 1,500 others required treatment.

The health ministry estimated that pollution in 2012 contributed to the premature deaths of 4,500 people in Tehran and about 80,000 across the country. – Rappler.com