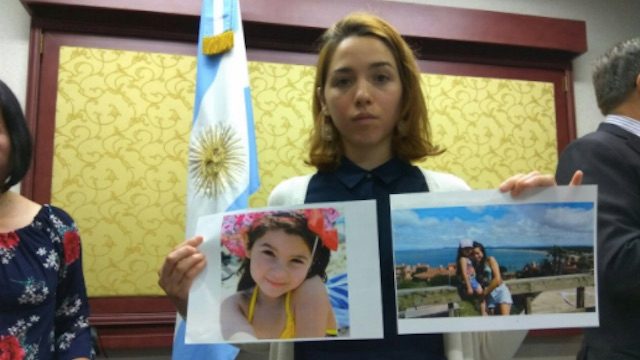 Facebook Twitter Copy URL
Copied
Elizabeth Avalos, the mother of the missing girl, flew to Jakarta to continue her search for her daughter who was kidnapped in June 2017

JAKARTA, Indonesia – A girl who has been missing for 8 months is believed to be in Indonesia, leading her mother to fly across the world to find her daughter.

27-year-old Elizabeth Avalos is seeking help to find 7-year old Alum Langone Avalos, who was kidnapped in Argentina in June 2017.

Alum was last seen in Toraja, South Sulawesi in Indonesia after initally being spotted in Jakarta.

“I am desperate, Alum has no one to help her, her father took her out of my country illegally and he has taken her away from her school, her friends, her family, and above all – her mother,” the 27-year-old said at a press conference at the Embassy of Argentina in Jakarta, on Monday, February 5.

Authorities believe Alum was kidnapped by her father, Jorge Langone, who first took the child to Bolivia.

Jorge Langone and Elizabeth Avalos met in 2010 and separated in 2013 because of Langone’s violent behavior. Elizabeth was granted full custody of her daughter by the Courts in Argentina, while Langone was allowed visitation rights.

According to Elizabeth, Langone did not respect the orders and had his own ideas on parenthood.

“He would always tell me he wanted to go traveling with his daughter, he did not want that Alum went to school because he thinks that school is bad,” she said.

She added that this was not the first time Langone kidnapped Alum, citing multiple occasions when Langone took the girl away, sometimes for more than 20 days.

“But always it has been inside my country, now he has taken her away to another country and I have to look for her,” Elizabeth said.

Langone, 41, is believed to be accompanied by his girlfriend Candela Gutierrez. In a flyer distributed to the public pleading for help, it said Langone and Gutierrez, “pretend to be a family” with Alum and “use fake names.” It also said the two “travel by hitchhiking” and pay for their travel by working as a musician and a dancer respectiviely.

Elizabeth claimed the couple has taken Alum first to Bolivia, then Brazil, Malaysia and now Indonesia.

Interpol has issued a warrant of arrest for Langone and Gutierrez.

Argentina Ambassador to Indonesia, Ricardo Luis Bocalandro requested for media and the people of Indonesia to join the search for Alum.

“We need to locate the girl and reunite her with her mother. It has almost been a year. It is not at all a good life for a young girl,” he said.

He urged anyone with information to contact the Argentina Embassy in Indonesia.

“It has obviously affected my life,” Elizabeth said. “I can’t breathe, I can’t do anything. I can’t go on with my life. I always think about my daughter.” – Rappler.com