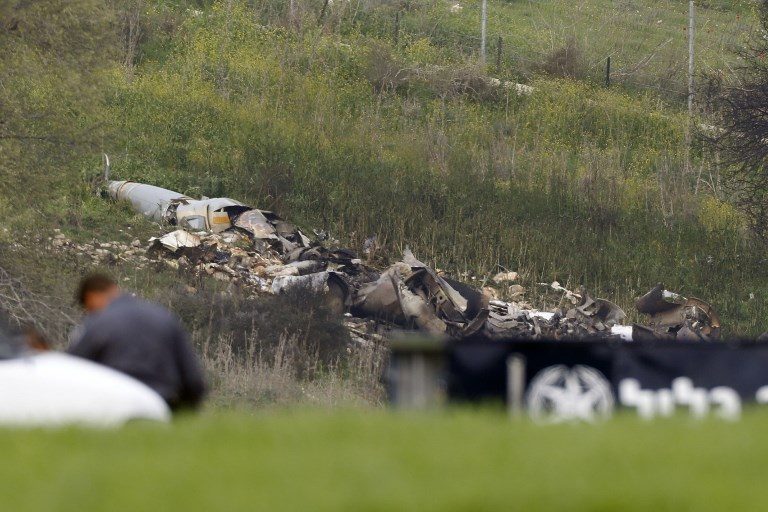 JERUSALEM (UPDATED) – Israel struck a dozen Syrian and Iranian targets inside Syria on Saturday, February 10, in “large-scale” raids after an Israeli fighter jet crashed under fire from Syrian air defenses in a severe increase in tensions, the military said.

The confrontation was the most serious between arch foes Israel and Iran since the start of the civil war in Syria in 2011.

Israel’s raids came after it intercepted what it said was an Iranian drone entering its airspace from Syria, which it labelled an “attack.”

It marked the first time Israel publicly acknowledged attacking what it identified as Iranian targets in Syria since the war began.

In response, Iran denounced Israeli “lies” and said Syria had the right to self-defense in response to Israeli strikes.

Separately, Iran issued a joint statement alongside the other main allies of the Syrian regime – Russia and Lebanese militant group Hezbollah – denying the allegations regarding the drone.

The Russian foreign ministry called for “restraint” from all parties.

Israeli military spokesman Jonathan Conricus warned that Syria and Iran were “playing with fire,” but stressed his country was not seeking an escalation.

“This is the most blatant and severe Iranian violation of Israeli sovereignty in the last years,” Conricus told journalists in a phone conference.

Israel said its reprisals after the exchange were “large-scale” raids that attacked Syrian air defense systems and Iranian targets.

“Twelve targets, including 3 aerial defense batteries and 4 Iranian targets that are part of Iran’s military establishment in Syria were attacked,” a military statement said.

Israel has repeatedly warned in recent weeks against the presence of Iranian forces in neighboring Syria.

The Israeli pilots of the crashed F16 were alive, although one was severely wounded, the military said.

According to the Israeli military, the confrontation began with the drone entering its airspace before being intercepted by a combat helicopter.

Conricus said it was intercepted well inside Israeli territory over the city of Beit Shean, near the Jordanian border.

He did not say whether the drone was armed or for reconnaissance, but alleged it “was on a military mission sent by Iranian military forces” from an “Iranian base” in the Palmyra area.

Eight Israeli aircraft then “targeted the Iranian control systems in Syria that sent the UAV” and confirmed hits, according to Conricus.

It was not clear if the jet crashed as a direct result of the Syrian fire.

According to the military, the pilots ejected, landed in Israeli territory and were taken to hospital.

Syria said its air defenses repelled two Israeli raids on its military bases in the center of the country, hitting more than one warplane during the first.

The Syrian Observatory for Human Rights, a Britain-based monitor of the seven-year civil war, said the earlier Israeli raids had targeted several military bases in the east of the central province of Homs.

It said the bases are used by both Iranian and Russian military personnel deployed in support of the regime.

Syrian state media said the later raids targeted military positions in the south of the country.

Iranian foreign ministry spokesman Bahram Ghasemi said Tehran “believes Syria has the right to legitimate self-defense. To cover their crimes in the region, Israeli officials are resorting to lies against other countries.”

He added that “Iran does not have a military presence in Syria, and has only sent military advisers at the request of the Syrian government.”

It said the Israeli strikes had targeted drones used against “terrorist organizations, primarily Daesh”, using an alternative name for the Islamic State group or ISIS.

The statement vowed a “relentless response” to “all further aggression”.

Israeli Prime Minister Benjamin Netanyahu has held a series of meetings in recent months with Russian President Vladimir Putin on Iran’s influence in Syria and Lebanon.

Netanyahu has been seeking to persuade Russia to limit Iran’s presence near Israeli territory and to stop it from entrenching itself militarily in Syria.

In a meeting in Moscow last month, Netanyahu reiterated concerns of what he described as attempts by Iran to establish a military presence in Syria and produce weapons against Israel there.

“We won’t accept either of those, and will act according to our needs,” Netanyahu said then.

Israel remains technically at war with Syria and occupies a swathe of the strategic Golan Heights that it seized in the Six-Day War of 1967 and later annexed in a move never recognised by the international community.

On Tuesday, Netanyahu took members of his security cabinet for a tour of the Israeli-occupied side, where they were briefed by the military.

Israel has sought to avoid direct involvement in the Syrian war, but acknowledges carrying out dozens of air strikes there to stop what it calls advanced arms deliveries to Hezbollah.

Several analysts said they did not expect a further escalation for now.

Ofer Zalzberg of the International Crisis Group said Russia should mediate since “it is the only stakeholder which has strong relations with all sides today.”

But he said “this incident signals a new phase in a way of the war in Syria.”

The Syrian regime is acting more boldly toward Israeli strikes because it feels it has gained the upper hand in the civil war, he said. – Rappler.com