Trump to EU: We’ll drop our tariffs if you drop yours 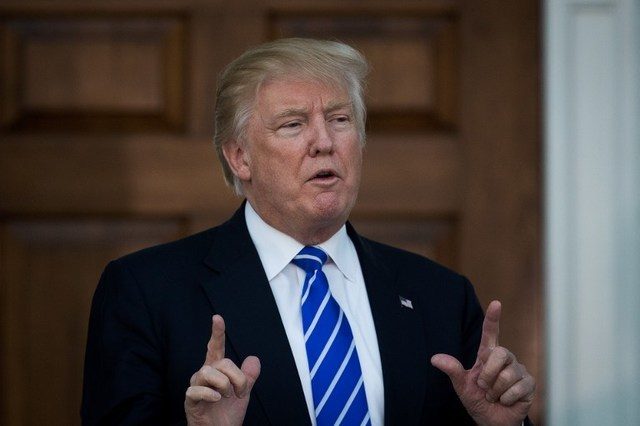 The American president made his comments after crunch talks in Brussels between EU negotiators and US Trade Representative Robert Lighthizer in an effort to defuse a bitter row that many fear could turn into an all-out trade war.

The EU’s top trade official said the US failed to provide full clarity on how Europe and Japan could be spared set to continue next week. (READ: EU says no ‘immediate’ clarity from US on trade tariffs)

“The European Union, wonderful countries who treat the U.S. very badly on trade, are complaining about the tariffs on Steel & Aluminum,” Trump said.

“If they drop their horrific barriers & tariffs on U.S. products going in, we will likewise drop ours. Big Deficit. If not, we Tax Cars etc. FAIR!”

President Donald Trump’s announcement of duties of 25 percent on imported steel and 10 percent on aluminum has stung the European Union, along with other major partners including Japan, whose Economy Minister Hiroshige Seko also attended the talks in Brussels.

“As long-standing security partners of the United States, (the EU and Japan) underlined to ambassador Lighthizer their expectation that EU and Japanese exports to the US would be exempted from the application of higher tariffs,” an EU statement said after the talks.

But after two-way talks with Lighthizer, European Trade Commissioner Cecilia Malmstroem tweeted: “No immediate clarity on the exact US procedure for exemption, however, so discussions will continue next week.”

Brussels has gone the furthest in fighting back against Washington’s shock measures, loudly announcing a list of US products to hit with countermeasures if its exports are affected by the tariffs.

Lighthizer, a loyalist to Trump’s “America First” mantra, made no official comment after the talks, but the three sides did agree on a series of next steps to address the oversupply worldwide of steel and other materials, mainly by China.

This progress was “unexpected” and a source of cautious optimism on solving the tariff row, an EU official said on condition of anonymity.

“If Trump wants his allies to demonstrate that they are united in tackling problems with China, this is precisely that,” the source added.

With tensions at a peak, the EU had sought to keep low expectations for any breakthrough on Saturday. European Commission Vice President Jyrki Katainen said it would be “a meeting, not THE meeting.”

Along with a huge range of steel products, the EU’s hit list of flagship American products lined up for countermeasures include peanut butter, bourbon whiskey, and denim jeans.

Germany — singled out for particular criticism by Trump — accused Washington of protectionism, calling the tariffs an “affront to close partners.”

German Chancellor Angela Merkel warned that “no one can win in such a race to the bottom” while French President Emmanuel Macron said Trump risked provoking a mutually destructive “trade war.”

Trump said the tariffs, which will come into effect 15 days after he formally unveiled them Thursday, will not initially apply to Canada and Mexico. He also added Australia to the list of likely carve-outs.

Complicating matters, Trump indicated that the sparing of Australia was linked to an unspecified “security agreement” outside of trade policy.

This shed light on Trump’s attacks against Germany — the biggest economy in the European Union — that have accused Berlin of contributing much less than the US toward the funding of NATO.

The EU exports around €5 billion ($4 billion) worth of steel and a billion euros worth of aluminum to the US each year, and the European Commission, the bloc’s executive arm, estimates Trump’s tariffs could cost some 2.8 billion euros.

Brussels is also looking at “safeguard” measures to protect its industry — restricting the bloc’s imports of steel and aluminum to stop foreign supplies flooding the European market, which is allowed under World Trade Organization rules. – Rappler.com