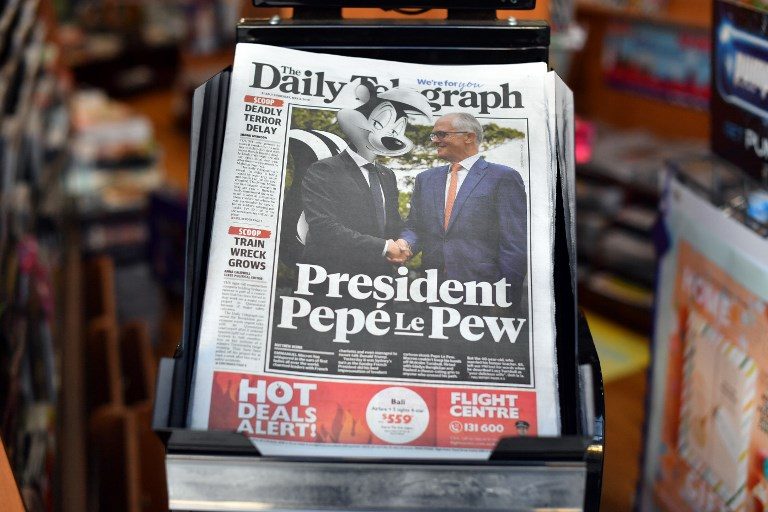 Facebook Twitter Copy URL
Copied
'A newspaper had some fun and it made me laugh a lot, especially since in the original cartoon the character has a French accent,' says French President Emmanuel Macron

SYDNEY, Australia – French President Emmanuel Macron on Thursday, May 3, laughed off the global sniggers he prompted after describing the wife of Australian Prime Minister Malcolm Turnbull as “delicious”.

The faux pas – “delicieux” in French can also mean “delightful” – caused widespread mirth, with one Sydney tabloid mocking up a nearly full-page photo of Macron with the cartoon head of Pepe le Pew, the lovelorn French skunk.

“A newspaper had some fun and it made me laugh a lot, especially since in the original cartoon the character has a French accent,” Macron told reporters shortly before leaving Sydney at the end of a two-day visit.

Macron, who demonstrated his excellent grasp of English during numerous speeches and remarks in Sydney, added that “there is not a European leader who gives all his speeches in English”.

The incident occurred at the end of a joint press conference on Wednesday, May 2, when Macron turned to Turnbull and said: “Thank you and your delicious wife for the warm welcome”.

At a private dinner later that night with Turnbull and wife Lucy, the hubbub over his remark “had them laughing a lot”, he said.

Turnbull also commented on the gaffe, saying his wife “was very flattered” by the youthful French president’s comment.

“She’s asked me to say that she found the president’s compliment as charming as it was memorable,” he said.

“President Macron charmed Australia. He certainly charmed all of us, all the Turnbulls. I think he is a great friend of Australia.”

Some in the Australian media and on Twitter were not so gracious, playing on the French reputation for romantic flair.

The newspaper’s photo-shopped front page bore the headline “President Pepe le Pew”, a reference to the Warner Brothers cartoon character who spends most of his time in luckless pursuit of a female cat.

“You can take the man out of France but…” tweeted Buzzfeed Australia journalist Alice Workman, while another user took a light-hearted jab at “the Gaul of that man”. – Rappler.com