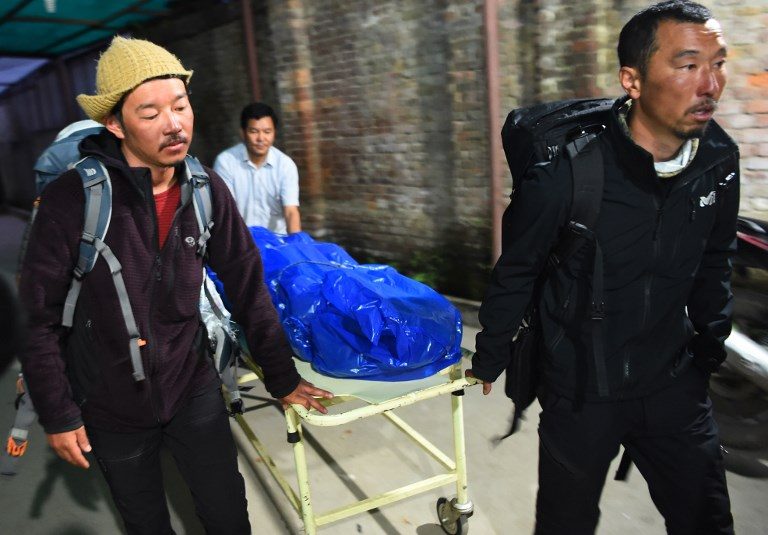 Facebook Twitter Copy URL
Copied
Since the first British expedition tried and failed to reach Everest's summit in 1921, the mountain has claimed 295 lives, according to the Himalayan Database

The two guides – both ethnic Sherpas from the valleys that surround Everest  were working on opposite sides of the mountain, which straddles the border between Nepal and Tibet.

Experienced guide Damai Sarki Sherpa, 37, fell more than 60 meters into a crevasse on Monday as he was helping a foreign climber to a rescue helicopter on the Nepal side of the mountain.

“He was rescued but had a very bad head injury. He died last night,” Gyanendra Shrestha, a government official at Everest base camp, told AFP.

Pasang Norbu Sherpa perished just below the summit in Tibet from a suspected heart attack, his employer said Tuesday.

Two other climbers have also died on Everest: Nobukazu Kuriki of Japan, who died during his eighth attempt to reach the summit, and a Macedonian mountaineer.

The majority of deaths on Everest this year have been the Sherpas, underscoring the risk they take accompanying hundreds of paying climbers to the top of the world’s highest peak.

Most climbers attempting to summit the 8,848 meter mountain do so with the help of at least one guide.

In 2014 an avalanche swept through the Khumbu icefall and killed 16 Sherpas who were carrying kit up the mountain.

It was the deadliest day on the mountain until the following year when another avalanche hit base camp and killed 18 people, including seven Sherpas.

The lucrative mountaineering industry is the biggest employer of men from the valleys that surround Everest.

The best-paid can earn up to $10,000 – more than 14 times the average annual income in Nepal – during the short two-month climbing season that runs until the end of May.

But the rapid growth in the number of climbing companies offering expeditions on Everest has sparked fears that more inexperienced mountaineers are putting themselves and their guides at risk.

There are also concerns that some operators are manning their teams with Sherpas who have limited experience at high altitudes.

Around 400 people have reached Everest’s summit so far this month. – Rappler.com