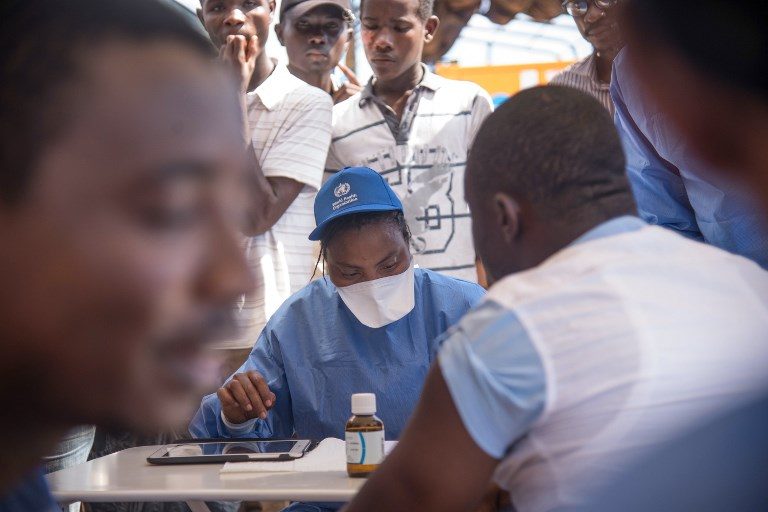 Facebook Twitter Copy URL
Copied
In Geneva, African health officials say they are preparing to send anthropologists to the Democratic Republic of Congo to help with an Ebola vaccination campaign

MBANDAKA, DR Congo – Health workers fighting Ebola in the Democratic Republic of Congo have run into an invisible but powerful hurdle – a belief system that deems the disease to be a curse or the result of evil spirits.

Some people are refusing medical care and turn instead to preachers and prayers to chase away the threat, they say.

The pastor of an evangelical church last Wednesday, May 16, died several days after he “prayed” for an Ebola victim who went to him for help, a doctor said.

“Some sick people believe that the Ebola epidemic comes from sorcery – they refuse to be treated and prefer to pray,” said Julie Lobali, a nurse on the front line against the DRC’s 9th Ebola outbreak.

She is working in a hospital in Mbandaka, a port city on the Congo River in northwest DRC where the first urban case was reported last Thursday, May 17.

Since the outbreak was declared in the remote area of Bikoro on May 8, 51 cases of Ebola have been reported with 27 deaths.

One superstition that has become prevalent in the city, she says, is believing that Ebola began in Bikoro as “a curse on those who ate stolen meat” – a wild animal hunted in the countryside.

Blandine Mboyo, who lives in Mbandaka’s district of Bongondjo,told AFP “a hunter put a curse on the village because his big game was stolen.”

“This curse is so powerful because it hits those who ate this meat, having heard about the theft or having seen the stolen animal,” added Nicole Batoa, a local vendor.

Another resident, Guy Ingila, observed that officials have said on the radio “this disease is incurable… It’s because it’s about witchcraft.”.

For doctors and health officials these beliefs raise serious concerns, complicating efforts to contain and roll back the deadly Ebola virus.

In Geneva on Tuesday, May 22, African health officials said they were preparing to send anthropologists to the DRC to help with an Ebola vaccination campaign.

A prototype vaccine will first be given to frontline health workers and then to people who have been in contact with Ebola cases.

“If we do not handle communication well, the vaccination program may suffer,” John Nkengasong, head of Africa Centers for Disease Control (Africa CDC), told reporters in Geneva.

“So we are also assessing how in the next two weeks or so to deploy anthropologists to support the vaccine efforts.”

in DR Congo, as elsewhere in Africa, disease and death are often not looked on as natural phenomena.

“So many deaths is a sign of a curse and can only have been provoked by a bad spirit,” said Zacharie Bababaswe, a Congolese specialist in cultural history, explaining people’s perceptions of Ebola.

Before the expansion of evangelical churches in the country, Bababaswe says many Congolese would go see the witch doctor or village healer for treatment.

Today there is still widespread superstition – but, since the 1980s, it has taken a different form, with some people turning for help to a church or a pastor who claims to have healing powers.

Two people infected with Ebola from Bikoro went to the churches rather than a medical centre for help, local witnesses said.

Another patient, who had been hospitalized in Mbandaka, left the medical center to seek out a local healer, they said.

To brake the spread of Ebola, “we have to convince villagers that the disease is not a curse,” said Bavon N’Sa Mputu, an elected official from Bikoro, pointing to the key role that churches can play. – Rappler.com