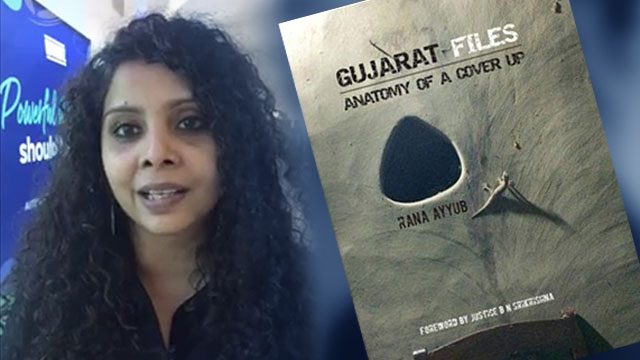 Facebook Twitter Copy URL
Copied
The harassment might have taken its toll on the physical and emotional well-being of Rana Ayyub, but she vows never to be silenced

MANILA, Philippines – A journalist from India is on the receiving end of death threats after an online hate campaign was launched over her exposé about government.

In her book Gujarat Files: Anatomy of a Cover Up, investigative journalist Rana Ayyub exposed the complicity of the state government then headed by Narendra Modi in the widespread killing of Muslims in Gujarat in 2002. (READ: Indian court jails 11 for life over Gujarat massacre)

The allies of Modi, who is now prime minister of India, are allegedly trying to discredit Ayyub and her book, which has sold 300,000 copies and has been translated into 16 languages.

“Ever since I wrote this book, there has been a concerted attack,” Ayyub told Rappler.

The attacks vary – from censorship, with other journalists being told not to write or talk about the book, to massive troll systems generating fake tweets in her name.

“They have been generating fake tweets in my name, saying I hate India and all Indians, and I’m advocating child rapists,” she said.

The latest effort to ruin Ayyub’s reputation saw the use of technology where her face was morphed into a pornographic video. Screenshots of this fake video have been widely shared in her home country.

According to Ayyub, this is the worst harassment she has ever received as a journalist – all because she continues to be critical.

“This has been happening for the last decade, but something of this nature that 5 United Nations special rapporteurs have to intervene has never happened before,” she said.

The UN special rapporteurs – including Agnes Callamard on extrajudicial killings, Michel Forst on the situation of human rights defenders, David Kaye on the promotion and protection of the right to freedom of opinion, Ahmed Shaheed on the freedom of religion, and Dubravka Simonovic on violence against women – called on the Indian government to “act urgently to protect” Ayyub amid the harassment and death threats.

“Governments also have a responsibility to build a safe environment for independent voices, including those of journalists critical of the authorities,” they said in a statement.

“We have previously urged the authorities in India to take active steps to reverse a political climate that, in recent years, has become increasingly polarized and hostile, especially to the media and those exercising the freedom of expression.”

Ayyub admitted the attacks have had a “drastic” effect on her psychological well-being.

“It’s not the same… I’m almost like a shadow of myself,” she said. “This has not happened to me before. It has taken a huge toll on me.”

Ayyub has been consulting a psychologist since going undercover in 2010. The journalist also takes medication for her anxiety and palpitations.

But despite the emotional and physical toll of the harassment, Ayyub still chooses to continue her work to expose wrongdoing.

“I know the people who are doing this want me to not do the journalism that I do,” she said. “If we are intimidated, we will not be doing the journalism we’ve been doing in the past 10 years.”

While social media boosts the reach of stories previously untold, it has become a platform for harassment in the form of mass trolling and hatred. (READ: Propaganda war: Weaponizing the internet)

“When you tweet something, there would be a thousand replies,” Ayyub said. “It’s like they want to inundate you with so much hate that you leave and stop having a voice.”

When the fake pornographic image went viral, she went silent and thought about leaving social media for good, before realizing that it is not her fault and she has not done anything wrong.

“They thought they could silence me forever,” she said. “Integrity is what keeps me going. This profession is not a profession we are in for money, we are in this profession because it keeps things going.”

Part of her battle is to ensure that those behind the smear campaign against her are held accountable.

“I want at least the people behind the pornographic video, the people who spread the fake tweets, arrest them and get them behind bars or at least start an investigation,” she said.

Justice, however, remains elusive. It has been a month since she filed a police complaint, but Delhi authorities have yet to act on it despite Twitter, the platform where the posts were shared, offering to help.

This lack of action on harassment complaints bothers Ayyub, who pointed out that if this can happen to an “urban journalist” like her, what more to women in rural areas with less access? – Rappler.com