Jun 27, 2018 2:33 PM PHT
Agence France-Presse
Facebook Twitter Copy URL
Copied
According to a detailed profile this week in Vogue, just months ago, Alexandria Ocasio-Cortez was still working as a server in a restaurant. She identifies as a Democratic socialist. 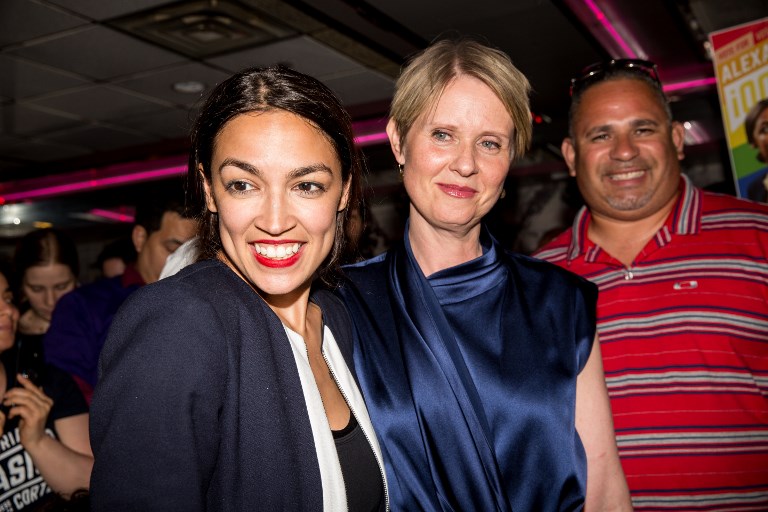 WASHINGTON DC, USA – The US Democratic Party was rocked to its core Tuesday, June 26, as establishment congressman Joe Crowley – seen as a potential standard-bearer – was ousted by a 28-year-old far-left political novice.

Crowley, a 10-term incumbent representing New York’s diverse 14th district and the number 4 Democrat in the House of Representatives, had been considered a possible successor to Nancy Pelosi as party leader and even speaker, should Democrats reclaim the majority in November’s midterm elections.

Instead the 56-year-old Crowley, chairman of the Democratic caucus, suffered the biggest shock upset to date in the 2018 political season, losing his primary to Alexandria Ocasio-Cortez, a Bronx-born Latina activist and Bernie Sanders supporter who has never held elected office.

According to a detailed profile this week in Vogue, just months ago Ocasio-Cortez was still working as a server in a restaurant. She identifies as a Democratic socialist.

Her impressive 15-percentage point victory could spell a leftward shift for the party that is squaring up against President Donald Trump’s Republicans in the fall.

Her campaign’s Facebook page highlights her political positions – expanded Medicare for all and tuition-free college – that are similar to those put forward by Sanders, a Vermont socialist who ran for the Democratic presidential nomination against Hillary Clinton in 2016.

The implications of Ocasio-Cortez’s primary victory are profound.

It highlights the Democratic Party’s surging progressive wing as it grapples with its identity in the Trump era and in the run-up to November’s midterm elections when Democrats are aiming to reclaim the House.

“We are going to rock the world in the next two years.”

“That is a big one that nobody saw happening,” he said, with uncharacteristic understatement, before following up with a more Trump-like declaration: “The Democrats are in Turmoil!”

A subdued Crowley addressed his supporters and wished Ocasio-Cortez well, hoping she would be victorious in November.

“I respect the outcome of this election,” he said.

Liberal Democrats congratulated the party’s newest star, with Sanders calling her victory an example of “what progressive grassroots politics can do.”

Crowley’s loss is reminiscent of the shock defeat 4 years ago of Republican congressman Eric Cantor, who was the party’s number two in the House until he was ousted by a little-known conservative college professor who successfully rallied grassroots voters. – Rappler.com