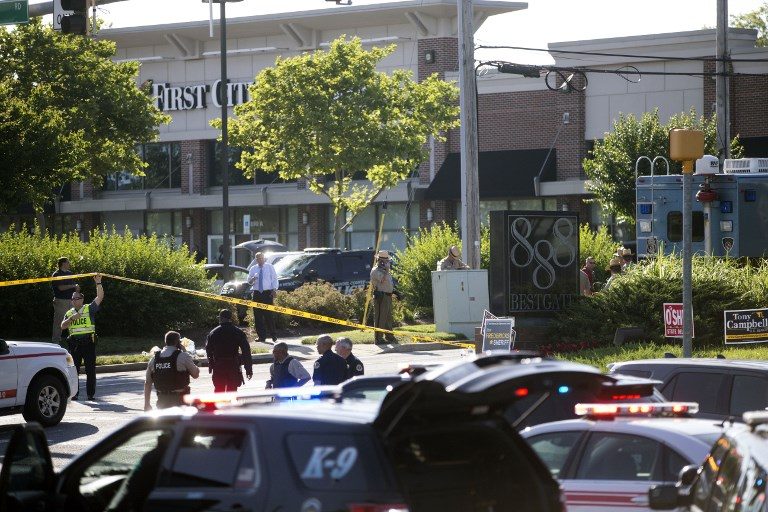 Facebook Twitter Copy URL
Copied
(UPDATED) Police do not yet know the shooter's motive, but 'we know that there were threats sent to the Gazette through social media'

ANNAPOLIS, USA (UPDATED) – A man armed with a shotgun and smoke grenades burst into a newspaper office in the US city of Annapolis on Thursday, June 28, killing 5 people in what police described as a “targeted attack.”

Officials said the shooting at the Capital Gazette newspaper was carried out by a white adult male resident of Maryland state who was being questioned in custody.

A reporter for the daily, which has roots dating back to the early 18th century, tweeted a chilling account of how the “gunman shot through the glass door to the office and opened fire on multiple employees.”

“There is nothing more terrifying than hearing multiple people get shot while you’re under your desk and then hear the gunman reload,” crime reporter Phil Davis said.

The Baltimore Sun – which owns the Capital Gazette – named Rob Hiaasen, the paper’s assistant editor, who mentored young journalists and wrote in a “wryly observant” style, as one of the victims of the shooting.

“This was a targeted attack on the Capital Gazette,” Krampf said.

He said that police did not yet know the shooter’s motive, but “we know that there were threats sent to the Gazette through social media.”

US media identified the suspected shooter as Jarrod Ramos, whom the Sun said had a long-running dispute with the newspaper over a 2011 story “that covered a criminal harassment case against him.”

Jimmy DeButts, a Capital Gazette journalist, tweeted that he was “devastated & heartbroken. Numb.”

“I’m in no position to speak, just know @capgaznews reporters & editors give all they have every day. There are no 40 hour weeks, no big paydays – just a passion for telling stories from our community,” DeButts wrote.

Devastated & heartbroken. Numb. Please stop asking for information/interviews. I’m in no position to speak, just know @capgaznews reporters & editors give all they have every day. There are no 40 hour weeks, no big paydays – just a passion for telling stories from our communty.

Chase Cook, a reporter at the newspaper, said the shooting would not stop The Capital – the local print edition – from going to press.

“We’re putting out a paper tomorrow,” vowed Cook as he typed grimly away in the shade of a car park, perched on the back of a pick-up truck.

I can tell you this: We are putting out a damn paper tomorrow.

“I don’t know what else to do except this,” he said. “We’re just doing our job.”

Gracie Rustin, a dental assistant who was in the middle of a procedure on the second floor of the building when the attack took place, heard “loud noises” but did not immediately realize it was a shooting.

Then police rushed in and “were like, ‘Leave, leave, leave!'” Rustin told Agence France-Presse.

Two floors up, Sean Robinson, who works for an insurance company, took shelter away as far as possible from the entrance and texted his wife to say, “Hey, this is going on. Just pray.”

When he heard a sound at the door, he asked himself – “friend or foe?”

It turned out to be a SWAT team, armed with assault rifles.

President Donald Trump, who has been at loggerheads with much of the media since taking office, tweeted a message of support.

“My thoughts and prayers are with the victims and their families. Thank you to all of the First Responders who are currently on the scene,” he wrote.

Prior to departing Wisconsin, I was briefed on the shooting at Capital Gazette in Annapolis, Maryland. My thoughts and prayers are with the victims and their families. Thank you to all of the First Responders who are currently on the scene.

‘Attack on every American’

“A violent attack on innocent journalists doing their job is an attack on every American,” White House spokeswoman Sarah Sanders tweeted.

“My heart is with the families, friends and loved ones of the victims as we learn more about this terrible situation,” Chris Van Hollen, the state’s junior senator said. “We must unite to end the violence.”

The senseless attack on a Maryland newspaper today is sickening. God bless these journalists. We pray for them and their families tonight.

A recent study found that Americans own 40% of the world’s firearms despite accounting for only 4% of the global population.

Of the 857 million guns owned by civilians, 393 million are in the United States – more than all of the firearms held by ordinary citizens in the other top 25 countries combined, according to the Small Arms Survey.

So far the results have been relatively modest. Florida has raised the legal age to buy firearms from 18 to 21, while Texas Governor Greg Abbott focused on mental health and improving school safety in his list of recommendations following the Santa Fe shooting in the rural southeast of his state. – Rappler.com