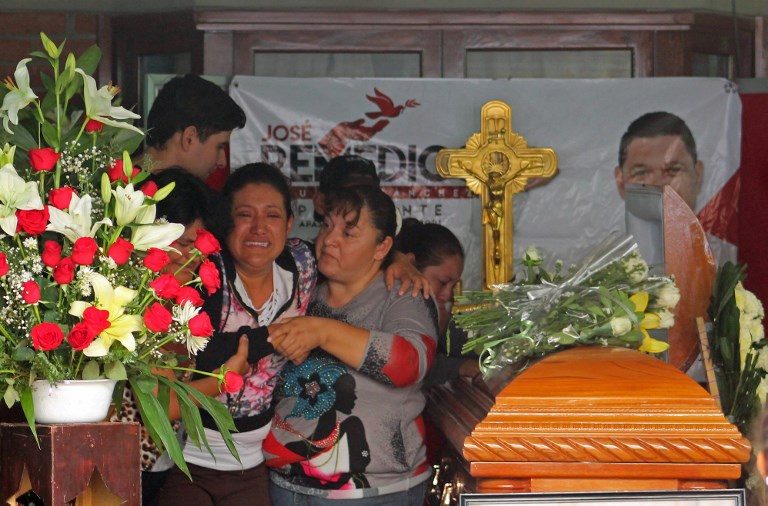 Facebook Twitter Copy URL
Copied
The victims include 48 candidates running for office – 28 who are killed during the primary campaigns and 20 during the general election campaign, says Etellekt

MEXICO CITY, Mexico – A total of 133 politicians have been murdered in the run-up to Mexico’s elections on Sunday, July 1, the consulting firm Etellekt said, as the violence gripping the country exploded into politics on a record scale.

The murders – mostly of local-level politicians, the most frequent targets for Mexico’s powerful drug cartels – were recorded between September, when candidate registration opened, and the close of campaigning on Wednesday, June 27, when an interim mayor was killed in the western state of Michoacan.

The victims included 48 candidates running for office – 28 who were killed during the primary campaigns and 20 during the general election campaign, Etellekt, which carried out a study of election-related violence, told Agence France-Presse (AFP) Thursday, June 28.

“This violence has been concentrated at the local level. At least 71% of these attacks have been against elected officials and candidates running for office at the local level,” said the firm’s director, Ruben Salazar.

“This is the result of very serious problems of governability at the local level,” he told Mexican radio network Formula.

Just one of the victims was running for federal office, he said.

It is by far the most violent election on record in Mexico.

“In the 2012 elections… there were only 9 politicians murdered and one candidate, according to our records,” said Salazar.

The country also registered a record number of murders across the board last year: 25,339.

And the record is on track to be broken again in 2018. May was the deadliest month since the government began keeping national homicide statistics in 1997, with 2,890 murders.

Mexico has been hit by a wave of violence since the government deployed the army to fight drug trafficking in 2006.

Since then, more than 200,000 people have been murdered – though the statistics do not track how many of the cases were linked to organized crime.

Salazar says political violence has been driven by the fragmentation of the cartels since the drug war began.

“The new cells that emerge… get rid of the (politicians) they don’t manage to strike a deal with,” he told AFP in a recent interview.

Mexico will elect a new president, Congress and thousands of state and local officials Sunday, following a campaign where corruption and violence have been dominant issues. (READ: Mexico campaign closes with leftist ‘AMLO’ looking unstoppable)

Rights group Amnesty International called on the Mexican government to do more to guarantee human rights in the violent electoral context.

“Faced with the most violent elections in its history, Mexico needs to take serious measures to guarantee its people can exercise their human rights, including the right to participate in public matters, during the elections this Sunday,” it said in a statement. – Rappler.com