Jul 1, 2018 6:34 PM PHT
Agence France-Presse
Facebook Twitter Copy URL
Copied
'I'm here because I want to see my Nicaragua free, it hurts that children like me have died, but we must continue fighting to get this dictator out,' a 15-year-old student says at the Flowers March, which was done in honor of the youth killed during months of unrest 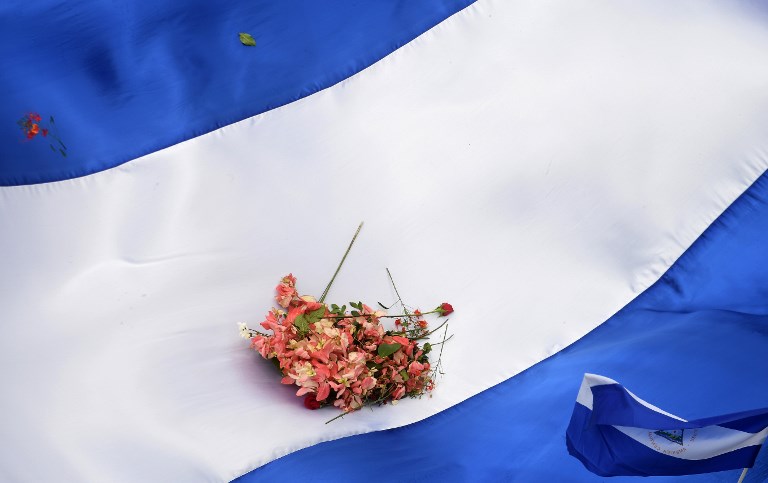 MANAGUA, Nicaragua – At least two demonstrators were killed and 11 others wounded in Nicaragua Saturday, June 30 a rights group said, as thousands of demonstrators marched against President Daniel Ortega across the Central American country.

Dubbed the Flowers March, the protests honored the youth killed in the more than two months of anti-Ortega unrest met with repression by government forces that has left at least 220 people dead.

A 23-year-old street vendor was shot in the head when some of the marchers strayed off the scheduled route, according to rights groups.

“This is something incredibly difficult,” said Luis Ortiz, the man’s elderly father, who fought alongside the president decades ago when Ortega was a Sandinista rebel commander.

“I never imagined that my son would die in the hands of someone with whom I fought so hard. I gave my sweat and my blood… I am an injured vet, too,” he said.

“I am still a Sandinista,” he added, “but not with Daniel,” referring to the president.

At the beginning of the march armed men also fired on a protesters’ barricade at the National Autonomous University of Nicaragua (UNAN), where the Nicaraguan Center for Human Rights (CENIDH) said one man behind student-erected barricades was killed.

“I’m here because I want to see my Nicaragua free, it hurts that children like me have died, but we must continue fighting to get this dictator out,” a 15-year-old student wearing a ski mask told Agence France-Presse.

In one hand, he was waving a Nicaraguan flag, and in the other, he held a mortar launcher.

‘Against the new dictatorship’

In other cities including Leon, Masaya and Granada marches were also organized by the Civic Alliance for Justice and Democracy.

The demonstrations were the first of their kind since May 30, when a huge Mother’s Day march turned bloody after pro-government forces attacked and left 18 people dead.

The protesters demand the resignation of Ortega, a 72-year-old former leftist guerrilla who came to power with the popular uprising that defeated the dictator Anastasio Somoza in 1979, and retook the presidency in 2007 after a vote.

Activists accuse him of establishing – together with his wife Vice President Rosario Murillo – nepotism, a dictatorship, and brutal repression.

“I have always marched, and today more than for our dead, for the children, I grieve for the murders at the hands of Ortega and Rosario. I was in 1979 against Somoza and now against the new dictatorship,” said Cecila Cruz, 67.

The march, supported by the powerful business union – formerly an ally of Ortega – had been suspended a week ago due to the violent incursion of riot police and paramilitaries in several areas of the country.

The Civic Alliance pushed back the demonstration to take advantage of a visit from experts from the Office of the United Nations High Commissioner for Human Rights and the Inter-American Commission on Human Rights.

The officials came to the country in the face of worsening repression, and have met with delegates from the government and the Alliance, as well as with victims of the violence.

With the mediation of the Catholic Church, the government and the Alliance resumed talks on Monday.

But dialogue has had trouble taking off because Ortega, whose third consecutive term ends in January 2022, will not consider a proposal to move up elections from 2021 to March 2019. – Rappler.com