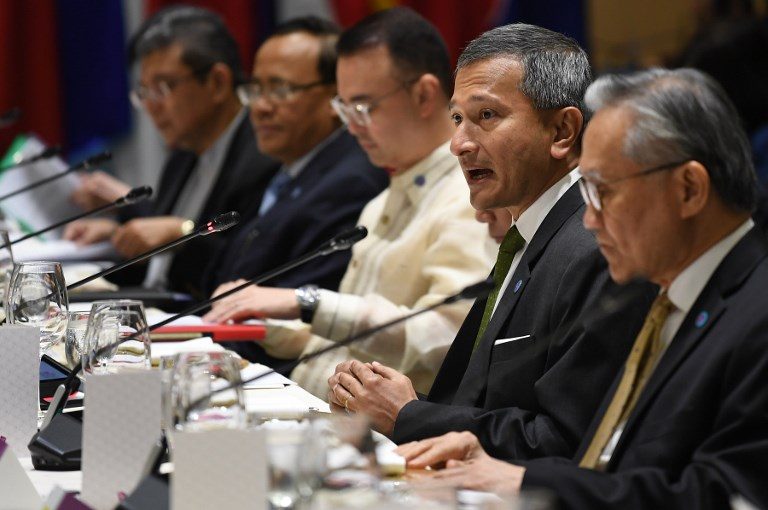 MANILA, Philippines – Foreign ministers of the Association of Southeast Asian Nations (ASEAN) will criticize China’s land reclamation in the disputed South China Sea, based on a draft statement that the ministers will issue on Friday, August 4.

They will also hail the June 12 meeting between US President Donald Trump and North Korean leader Kim Jong-Un, as they urge the US and North Korea to aim for a denuclearized Korean Peninsula.

“We discussed the matters relating to the South China Sea and took note of the concerns expressed by some countries on the land reclamations in the area, which have eroded trust and confidence, increased tensions and may undermine peace, security, and stability in the region,” said the ASEAN foreign ministers in their draft statement or joint communiqué.

They also “emphasized the importance of non-militarization and self-restraint in the conduct of all activities by claimants and all other states” in the South China Sea.

ASEAN is now chaired by Singapore. In 2017, ASEAN was chaired by the Philippines.

In the Philippines in August 2017, ASEAN foreign ministers issued a similar statement criticizing China’s “land reclamations and activities in the area,” even as China persisted in militarizing the South China Sea. (READ: Chinese bombers land on South China Sea island)

Meanwhile, on North Korea, ASEAN foreign ministers in their draft statement this year welcomed the talks between Trump and Kim.

“We welcomed the Inter-Korean Summit (IKS) on 27 April 2018, the summit meeting between the United States (US) and the Democratic People’s Republic of Korea (DPRK) in Singapore on 12 June 2018, as well as the joint statement signed between US President Donald J. Trump and Chairman of the State Affairs Commission of the DPRK Kim Jong-Un,” the ASEAN foreign ministers said.

“We urged the US, the DPRK, as well as all concerned parties to continue working towards the realization of lasting peace and stability on a denuclearized Korean Peninsula, including through the full and expeditious implementation of the joint statement,” they said.

In Manila in August 2017, ASEAN foreign ministers voiced “grave concerns” over tensions in the Korean Peninsula. The US recently urged the international community to maintain pressure on North Korea. – Rappler.com