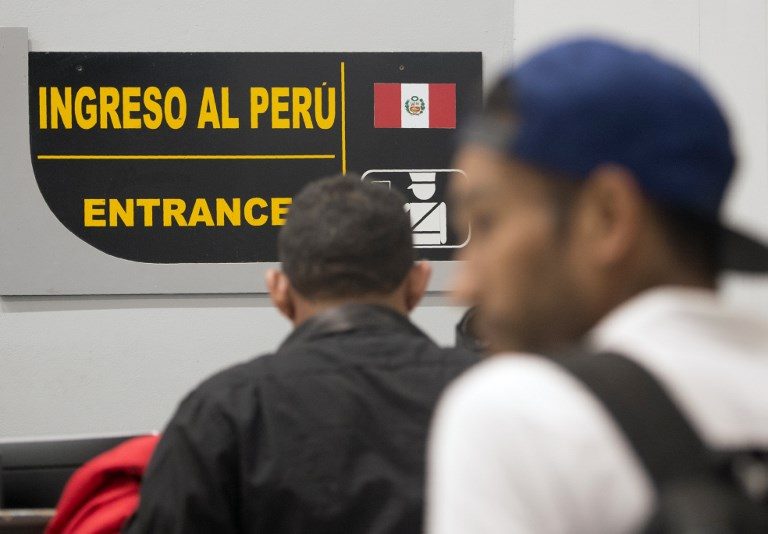 Facebook Twitter Copy URL
Copied
Colombia has pleaded with its southern neighbors to agree to a combined migration strategy, while Ecuador has called a meeting of 13 Latin American countries next month to discuss the crisis

TUMBES, Peru – Peru on Saturday, August 25, closed its borders to Venezuelan migrants without a passport, as thousands holding only identification cards reached the border in a last minute crush, some beating the deadline with special assistance from Ecuador.

Thousands of Venezuelans fleeing their country’s spiraling economic and political crisis rushed towards the Peruvian border after last week’s announcement from Lima that they had one week to enter before a passport would be required.

The flood of Venezuelans at Peru’s northern border crossing at Tumbes was so overwhelming that the station – normally open 24 hours a day – closed at midnight Friday (0500 GMT Saturday or 1 pm Philippine time) when the new rules came into effect.

The lucky ones already in line were handed tickets and told they could still enter without a passport when the border crossing reopens at sunrise. Border agents took no questions from reporters.

Ecuador opened a “humanitarian corridor” on Friday and lifted its own entry restrictions to facilitate the Venezuelans’ travels to Peru.

Interior Minister Mauro Toscanini said that 35 busloads of migrants were on the move along the route authorities had opened to Peru.

“We got here because the Ecuadorans brought us aboard 5 buses under escort,” a grateful Virginia Velasquez, 36, told Agence France-Presse (AFP). She managed to slip into Peru just minutes before midnight.

“Thank god I’m in Peru,” added 15 year-old Felipe Fernandez, who arrived with his parents and a brother.

Peru is one of the region’s fastest growing economies with 4.7 percent growth projected for next year.

But anti-immigrant sentiment is on the rise, and stricter requirements for Venezuelans has popular support. There are already an estimated 400,000 Venezuelans in Peru.

“We’re sorry for the Venezuelan people, but they are taking a job away from a Peruvian,” said Giannella Jaramillo, who runs a clothes stall in Aguas Verdes, a town bordering with Ecuador.

Given the new Peruvian restrictions some Venezuelans decided to stay in Ecuador – including Lourdes Ruiz, 36, who had been traveling for one month by land destination Lima.

Anyway, “we don’t have anyone to receive us” in Peru, Ruiz told AFP on the Ecuadoran side of the border.

Several groups have set up aid stations in the 6-kilometer gap between the Ecuadoran and Peruvian border crossings.

Some of the Venezuelans walked 2,000 kilometers and more carrying young children and their luggage in tow. The lucky ones arrived on buses and trucks.

On the Ecuadoran side, 3 large tents with 25 mattresses each were set up for Venezuelans.

“The children are tired and dizzy because the trip has been quite complicated,” Carolina Velandria, a 36-year-old supermarket manager told AFP after crossing into Peru.

Peru’s education ministry set up a special tent to entertain the youngest children during their long wait.

Crossing the border into Peru however is just the first step.

Reaching the nearest city, Tumbes, costs $10 by taxi, the only authorized public transport. And it’s $35 more for a 20 hour bus trip to the capital Lima, 1,200 kilometers to the south.

Colombia has pleaded with its southern neighbors to agree to a combined migration strategy, while Ecuador has called a meeting of 13 Latin American countries next month to discuss the crisis.

Of the 2.3 million Venezuelans living abroad, more than 1.6 million have fled the country since the crisis began in 2015, according to UN figures.

The pace of departures has accelerated in recent days.

“It remains critical that any new measures continue to allow those in need of international protection to access safety and seek asylum,” UN High Commissioner for Refugees Filippo Grandi said on Thursday.

The UN said up to 4,000 people were arriving daily in Ecuador, Peru, Colombia and Brazil, where migrants have been violently turned back by locals concerned with increasing crime.

Colombia says it has already given temporary residence to 870,000 Venezuelans but it can barely cope. It’s the same for Peru, where earlier this month, a record 5,100 people entered the country in a single day.

Venezuela is in a fourth straight year of recession, with double-digit declines in its gross domestic product. The inflation rate is expected to reach one million percent this year, according to the International Monetary Fund. – Rappler.com