Quake-hit Indonesia asks for help, graves dug for 1,000-plus 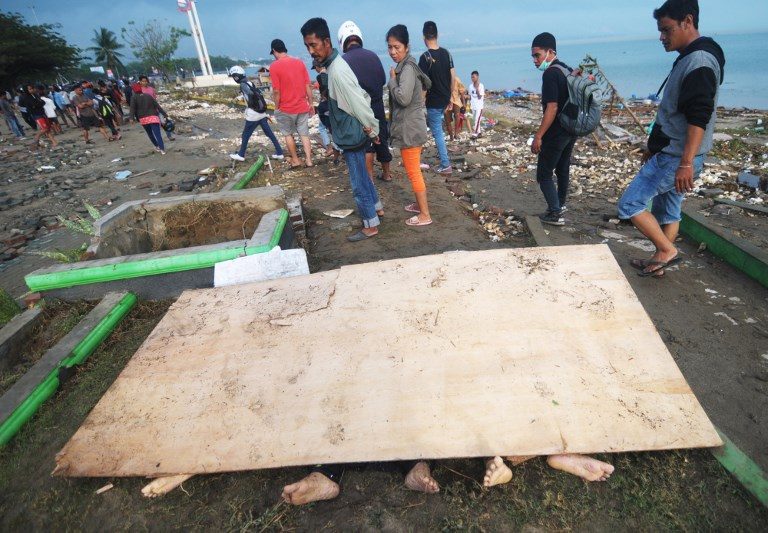 PALU, Indonesia – Indonesian volunteers dug mass graves for more than 1,000 bodies on Monday, October 1, after an earthquake and tsunami devastated swathes of Sulawesi, as authorities, who were struggling to deal with the sheer scale of the disaster, appealed for international help.

Indonesia is no stranger to natural calamities and Jakarta wanted to show that it was able to deal with a catastrophe that has killed at least 832 people so far according to the official toll.

But 4 days on some remote areas have yet to be contacted, medicines are running out and rescuers are struggling with a shortage of heavy equipment to reach desperate victims calling out from the ruins of collapsed buildings.

In response, President Joko Widodo opened the door to the dozens of international aid agencies and NGOs lined up to provide live-saving assistance.

Officials fear the toll will rise steeply in the coming days and are preparing for the worst.

At Poboya – in the hills above the devastated seaside city of Palu – volunteers dug a 100 meter-long grave to bury the dead, with instructions to prepare for 1,300 victims to be laid to rest.

Authorities are desperate to stave off any disease outbreak caused by decomposing bodies and have announced a 14-day state of emergency.

In Balaroa, a Palu suburb once home to a housing complex, the scale of the damage was apparent. A wasteland of flattened trees, shards of concrete, twisted metal roofing, doorframes and mangled furniture stretched out into the distance. (IN PHOTOS: Death and destruction in Sulawesi)

Dazed groups of people ambled over the wreckage, unclear where or how to start digging. Among them were three men looking for their younger brother.

Rescuers are racing against the clock and a lack of equipment to save those still trapped in the rubble, with up to 60 people feared to be underneath one Palu hotel alone.

Two survivors have been plucked from the 80-room Hotel Roa-Roa, Indonesia’s search and rescue agency said, and there could still be more alive.

Desperate survivors turned to looting shops for basics like food, water and fuel as police looked on, unwilling or unable to intervene.

“There has been no aid, we need to eat. We don’t have any other choice, we must get food,” one man in Palu told AFP as he filled a basket with goods from a nearby store.

The disaster agency said a tsunami warning system, which might have saved lives, had not worked for 6 years due to a lack of money.

“Our funding has been going down every year,” agency spokesman Sutopo Purwo Nugroho said.

Many have spent the last days desperately searching for loved ones while dealing with the trauma of the disaster.

One survivor, Adi, was hugging his wife by the beach when the tsunami struck on Friday. He has no idea where she is now, or whether she is alive.

“When the wave came, I lost her,” he said. “I was carried about 50 meters. I couldn’t hold anything,” he said.

Others have centred their search for loved ones around open-air morgues, where the dead lay in the baking sun – waiting to be claimed, waiting to be named.

As dire as the situation in Palu is, it was at least clear. In outlying areas, the fate of thousands is still unknown.

Indonesia’s Metro TV broadcast aerial footage from a coastal community in Donggala, close to the epicentre of the quake. Some waterfront homes appeared crushed but a resident said most people fled to higher ground after the quake struck.

“When it shook really hard, we all ran up into the hills,” a man identified as Iswan told the TV.

“Humanitarian groups are struggling to get people into affected areas,” she said. The main airport at Palu was damaged, landslides had cut off key roads while “power is out almost everywhere,” she added.

Satellite imagery provided by regional relief teams showed severe damage at some of the area’s major ports, with large ships tossed on land, quays and bridges trashed and shipping containers thrown around.

A double-arched yellow bridge had collapsed, its ribs twisted as cars bobbed in the water below.

Indonesia, home to 260 million people, is one of the world’s most disaster-prone nations.