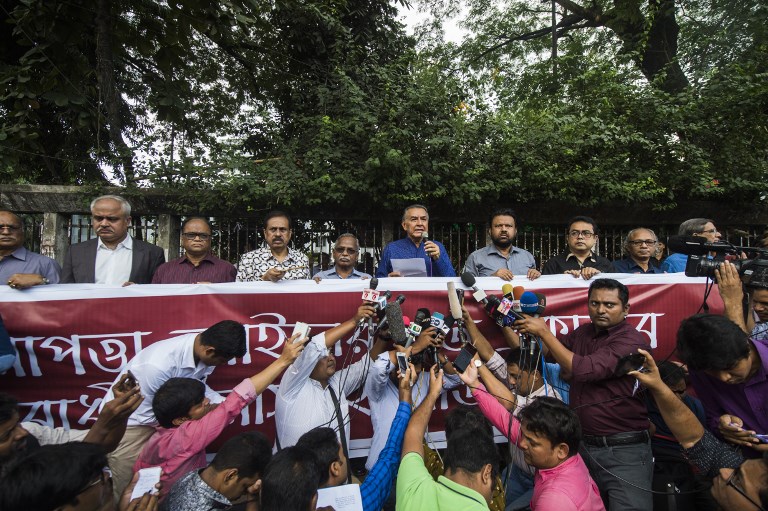 Critics say the measures – including prison sentences for spreading “negative propaganda” – are an attempt by an increasingly autocratic Prime Minister Sheikh Hasina to stifle dissent in the South Asian nation.

Sixteen members of the Sampadak Parishad, a council of top editors, stood in front of the national press club in Dhaka, holding their hands to form a human-chain – a popular form of protest in Bangladesh.

They also held a banner that read “abolish the anti-freedom of expression articles in the digital security act.”

According to the Digital Security Act 2018, a journalist could be convicted of espionage for entering a government office and gathering information secretly using any electronic device – an offense that would carry a 14-year jail sentence.

It also carries similar sentences for spreading “negative propaganda” on a digital device about the country’s war of independence or its founding leader Sheikh Mujibur Rahman.

The law also allows police to arrest a journalist without any warrant and confiscate his equipment.

Mahfuz Anam, editor of the mass circulation Daily Star newspaper, said the protestors were not against the principal of a digital security law, but that in its current form it “opposes independent journalism and free press”.

He said 9 sections of the newly passed law should be amended in the final session of parliament before the general election, due to be held in December or January.

Top editors and journalists had held a last-minute meeting with government ministers demanding that nine sections of the legislation be changed. The law minister promised that he would discuss the issues – but the president went ahead and signed the act into law last week.

Rights groups in Bangladesh including Human Rights Watch and the International Federation of Journalists have condemned the bill.

Prime Minister Hasina, however, defended the law saying “if there is no criminal mind, there is no reason to worry”.

The law was enacted weeks after top Bangladeshi journalist and activist Shahidul Alam was arrested during massive student protests in the capital Dhaka for making “false” and “provocative” statements on Al Jazeera and Facebook Live.

He is being investigated for allegedly violating Bangladesh’s already stringent internet laws enacted in 2006.

Rights groups, UN rights experts, Nobel laureates and hundreds of academics have called for the immediate release of the 63-year-old, who says he has been beaten in custody. – Rappler.com