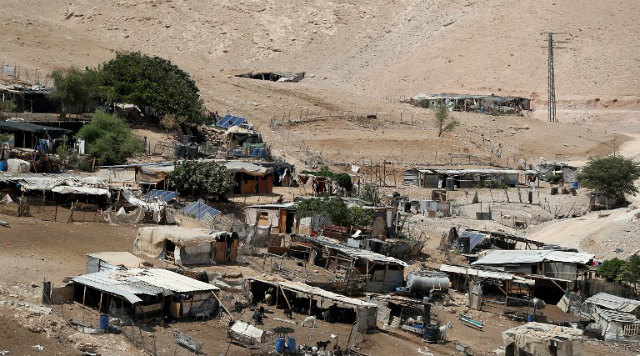 “The intention is to give a chance to the negotiations and the offers we received from different bodies, including in recent days,” a statement from Netanyahu’s office said about Khan al-Ahmar.

But speaking later ahead of a meeting with US Treasury Secretary Steven Mnuchin, Netanyahu appeared to play down the latest move and insisted that the village would still be cleared eventually.

“It’s our policy and it will take place,” he said. “I have no intention on delaying it indefinitely, but for a short, limited period.”

Netanyahu said the extent of the delay would be determined by the security cabinet, which was due to convene Sunday.

Israeli authorities say the small village, located east of Jerusalem along a road leading to the Dead Sea, was built illegally, and had given residents until the beginning of October to leave and demolish their structures.

The decision to evict the villagers followed years of legal battles and after negotiated attempts to agree on an alternative site for relocation failed.

The fate of Khan al-Ahmar has drawn international concern, with European countries calling on Israel not to move ahead with plans to demolish it.

Israel’s supreme court on September 5 rejected a final appeal against the demolition, but following that ruling, there have been unofficial attempts to reach understandings, a lawyer representing the village’s residents told AFP.

“Our offers were based on what we told the court, that we’re willing to move a few hundred meters to the north,” Tawfiq Jabareen said. “Based on these proposals we’ve reached understandings.”

The government has yet to respond to the proposals, Jabereen said, refusing to divulge the identity of the person attempting to mediate between the sides.

Netanyahu’s move raised the ire of his two major coalition partners, with Defense Minister Avigdor Lieberman saying he opposed the decision to delay the demolition.

Education Minister Naftali Bennett also insisted the law must be upheld, “even if the international community opposes and threatens”.

On Wednesday, the International Criminal Court’s chief prosecutor warned that Israel’s planned “evacuation by force” of the village could constitute a war crime.

The residents have refused to leave on their own, and Israel had been making the preparations to expel the residents and demolish the village.

Khan al-Ahmar is situated in a strategic spot near Israeli settlements.

There have been warnings that continued settlement building in the area would eventually divide the West Bank in two, dealing a death blow to any remaining hopes of a two-state solution. – Rappler.com