Nov 5, 2018 11:19 PM PHT
Agence France-Presse
Facebook Twitter Copy URL
Copied
US Secretary of State Mike Pompeo says 8 countries would be at least temporarily exempt from the ban on buying Iranian oil due to special circumstances or so as not to disrupt energy markets 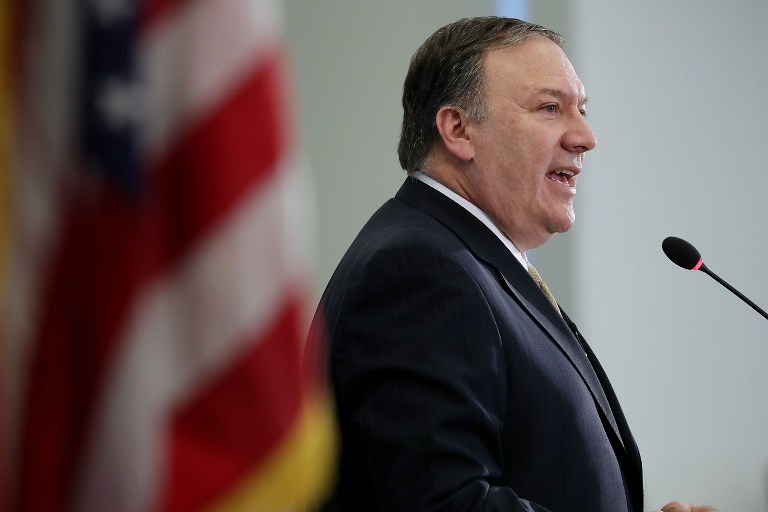 WASHINGTON, USA – The United States will exempt China, India and Japan from oil sanctions on Iran, Secretary of State Mike Pompeo said Monday, November 5, while vowing to be “relentless” in pressuring Tehran.

Hours after sweeping sanctions were reimposed following the US withdrawal from a denuclearization deal, Pompeo said 8 countries would be at least temporarily exempt from the ban on buying Iranian oil due to special circumstances or so as not to disrupt energy markets.

The countries with the waivers will be China, India, Italy, Greece, Japan, South Korea, Taiwan and Turkey, Pompeo said.

“Our objective is to starve the Iranian regime of the funds it uses to fund violent activity throughout the Middle East and around the world. Our ultimate goal is to encourage them to abandon their revolutionary course,” Pompeo told reporters.

A notable omission was Iraq. Had Iraq been granted a waiver, Iran might have been able to skirt sanctions by mixing its crude with its neighbor’s output, analysts say.

President Donald Trump withdrew in May from the deal that his predecessor Barack Obama had reached with Iran, calling it a failure because it addressed only the clerical regime’s nuclear program.

Pompeo reiterated demands for Iran to make a “180-degree turn” from its regional policies rooted in the 1979 Islamic revolution, such as support for the Lebanese militia Hezbollah.

“We hope a new agreement with Iran is possible, but until Iran makes changes in the 12 ways I listed in May, we will be relentless in exerting pressure on the regime,” Pompeo said.

Pompeo said the 8 countries exempted have “already demonstrated reduction of Iranian crude over the past six months and, indeed, two of those 8 have already completely ended imports of Iranian crude and will not resume as long as the sanctions remain in place.”

“We continue negotiations to get all of the nations to zero,” he said.

Pompeo also said without specifying that the United States would exempt 3 non-proliferation projects underway in Iran from the sanctions.

European powers have strongly disagreed with Trump’s decision, pointing out that Iran is abiding by the nuclear agreement, and have looked to create ways to allow its businesses to keep up commerce with the country. – Rappler.com