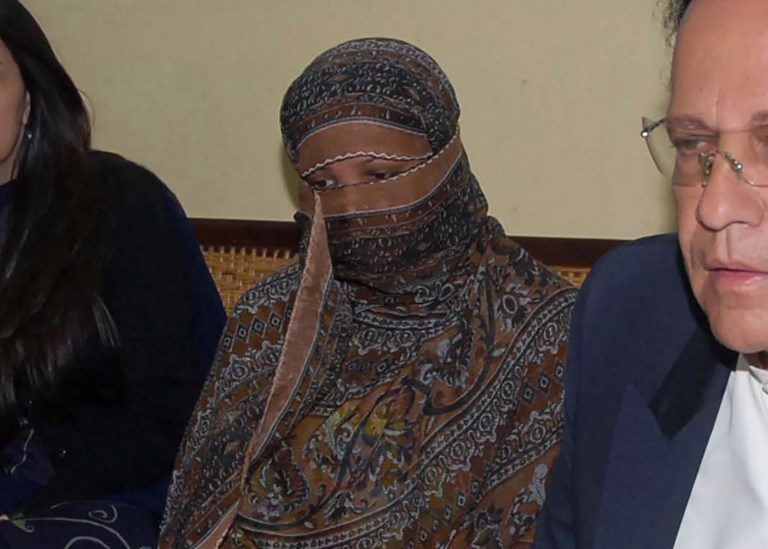 ISLAMABAD, Pakistan – A Pakistani Christian woman who spent 8 years on death row for blasphemy has been freed from jail and is believed to have already flown out of the city of Multan where she was being held, heading for an unknown destination, her lawyer said Thursday, November 8.

Asia Bibi’s release comes a week after her acquittal in a landmark case that triggered angry Islamist protests in Muslim-majority Pakistan and following appeals from her husband for Britain or the United States to grant the family asylum. Her lawyer fled to the Netherlands on Saturday, November 3, under threat to his life.

Bibi’s conviction was overturned by the country’s highest court last Wednesday, November 7, but she remained in prison as the government negotiated with hardliners who blockaded major cities and demanded her immediate execution.

“She has been freed,” lawyer Saif-ul-Mulook said in a text message to Agence France-Presse (AFP). “I have been told that she is on a plane but nobody knows where she will land.”

According to a civil aviation official, the aircraft that collected Bibi from jail would be required to land in Islamabad but it was unclear if she may have had a connecting flight.

Following protests at last week’s ruling, the government agreed in a deal with Islamists to impose a travel ban on Bibi, and not to challenge an appeal in the Supreme Court.

An order for her release arrived Wednesday at the jail in the central city of Multan where she was held, a prison official told AFP.

“Asia Bibi has left the prison and has been transferred to a safe place!” tweeted Antonio Tajani, president of the European Parliament.

Another civil aviation official, in Multan, said a small plane arrived in the city with “a few foreigners and some Pakistanis” on board to fetch Bibi.

Her case has underscored deep divisions between traditionalists and modernizers in the devoutly Muslim country.

The conviction stemmed from a 2009 incident when Bibi was asked to fetch water while out working in the fields.

Muslim women laborers objected to her touching the water bowl as a non-Muslim, and a fight reportedly erupted.

A local imam then claimed Bibi insulted the Prophet Mohammed.

Pope Benedict XVI called for her release in 2010, while his successor, Pope Francis, met her daughter in 2015.

Bibi’s husband Ashiq Masih has appealed for Britain or the United States to grant the family asylum and several governments including those if Italy and France have offered to help.

Italy’s Interior Minister Matteo Salvini tweeted: “I will do everything humanly possible to guarantee this young woman’s future.”

Blasphemy is an incendiary charge in Muslim-majority Pakistan, where even unsubstantiated allegations of insulting Islam can result in death at the hands of mobs.

Mere calls to reform the law have provoked violence, most notably the assassination of Salmaan Taseer, the governor of Pakistan’s Punjab province, by his own bodyguard in Islamabad in 2011.

Demonstrations broke out in major cities across the country in the wake of the ruling, with club-wielding protesters blocking Islamabad’s main highway and barricading roads in Karachi and Lahore.

One of the most vocal groups in the protests – the Tehreek-e-Labaik Pakistan (TLP) – called for “mutiny” against the army’s top brass and the assassination of the top court’s justices.

In a statement, the TLP termed Bibi’s release “against the government agreement.”

“The entire atmosphere of Pakistan is in pain and grief after hearing the news about the blasphemer of the holy prophet Asia,” it said.

One resident in Multan, Rizwan Khan, told AFP that Bibi would not be safe wherever she went, while another, Qari Muneer, said the decision should be reversed and called for her to receive “strict punishment.” – Rappler.com