Nov 9, 2018 8:24 AM PHT
Agence France-Presse
Facebook Twitter Copy URL
Copied
Democrats Andrew Gillum in Florida and Stacey Abrams in Georgia are aiming to become the states' first African-American governors, but the races are tilting in favor of their Republican rivals 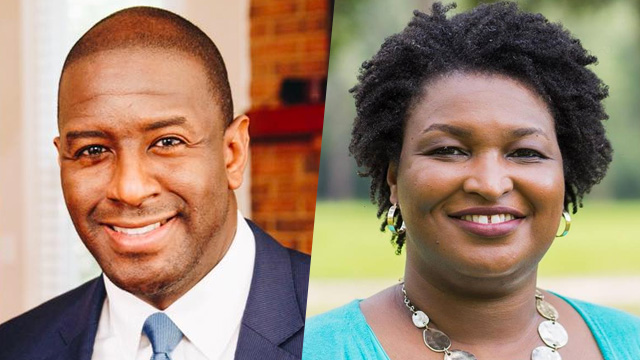 WASHINGTON DC, USA – Florida’s races for governor and US Senate appeared headed Thursday, November 8, for law-mandated recounts, while the Democratic candidate for governor in neighboring Georgia threatened legal action to ensure all votes are counted in her tight race.

The two southern states are in the spotlight after the closely watched midterm elections on Tuesday, November 6, in which Democrats reclaimed the House of Representatives from President Donald Trump’s Republicans and flipped a number of governorships.

Two Democratic candidates, Andrew Gillum in Florida and Stacey Abrams in Georgia, were aiming to become the states’ first African-American governors, but the races were tilting in favor of their Republican rivals.

Since Tuesday’s election, “it has become clear there are many more uncounted ballots than was originally reported,” Gillum spokeswoman Johanna Cervone said in a statement, amid reports that unknown numbers of ballots had yet to be counted in Democrat-leaning Broward County.

Gillum is “ready for any outcome, including a state-mandated recount,” she added.

The race between Democratic Senator Bill Nelson and Republican challenger Rick Scott, Florida’s term-limited governor, was even closer: Scott leads by 17,344 votes, or 0.22%.

State law triggers a recount if the difference in a race is within 0.5%. If the margin is within 0.25%, as it stood Thursday in the Senate race, a hand recount – slower and more thorough than by machine – is ordered.

Unusual voting discrepancies were also being reported in Broward County.

The South Florida Sun Sentinel said it analyzed voting patterns and found that of Broward ballots already counted, 24,700 residents voted for a governor candidate but did not pick a candidate for Senate.

The unusual pattern appeared in no other Florida county, the newspaper reported.

The likely recount is reminiscent of the dramatic recounts that occurred in parts of Florida after the 2000 election.

Those recounts were halted by the US Supreme Court, and George W. Bush defeated Al Gore by 537 votes in Florida to win the presidency.

Meanwhile, Abrams trailed Georgia secretary of state Brian Kemp by 1.3% in their governor’s race, but her campaign complained that Kemp proclaimed victory prematurely.

“All the votes haven’t been counted,” Abrams lawyer John Chandler told reporters, adding that there are outstanding absentee and provisional ballots.

“We will litigate until we have determined that every person’s vote has been counted,” Chandler said.

Amid mounting concern over Kemp’s oversight role in elections, Kemp resigned Thursday as secretary of state, but repeated his assertion that he defeated Abrams.

“The votes are not there for her,” he said. – Rappler.com