Tusk lashes out at Trump stance on Europe 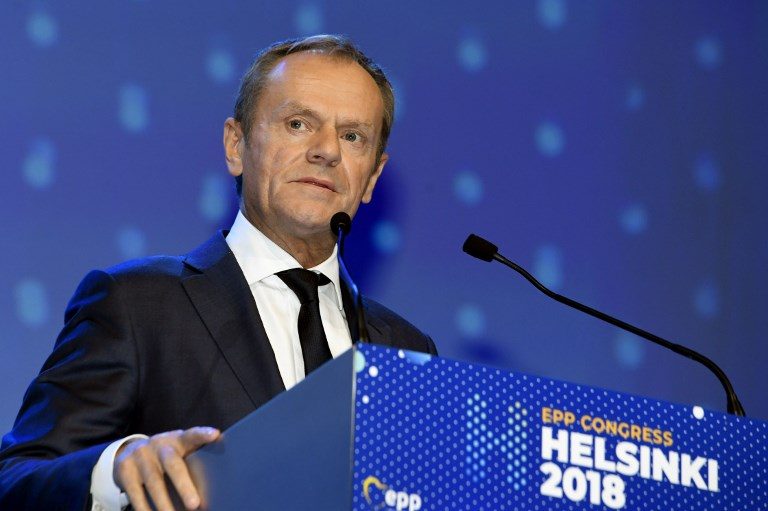 Facebook Twitter Copy URL
Copied
'For the first time in history we have an American administration that is, to put it mildly, not enthusiastic about a united and strong Europe,' EU chief Donald Tusk says

LODZ, Poland – European Union chief Donald Tusk on Saturday, November 10, accused US President Donald Trump of being averse to a “strong and united” Europe and also warned against the emergence of a “brownshirt” nationalist front in EU elections next year.

His comments came as Trump, in France for World War I centenary commemorations, blasted French President Emmanuel Macron over his proposals for a European army.

“For the first time in history we have an American administration that is, to put it mildly, not enthusiastic about a united and strong Europe,” Tusk said in a speech in his native Poland.

“I’m speaking about facts, not propaganda,” Tusk – a possible future Polish president – said on the eve of celebrations to mark Poland’s 100th anniversary of independence.

The EU Council president has previously voiced fears that Trump was seeking to tear down the post World War II order, with the US leader once calling the EU a foe in trade.

In an interview published Saturday by the Polish newspaper Gazeta Wyborcza, Tusk also said he believed Trump wanted a world with “the United States on one side and on the other, a disparate collection of other countries”.

Trump on Friday, November 9 fired off a tweet berating Macron’s calls for a European army, but the French president on Saturday sought to ease the row, hailing the “great solidarity” between the two countries.

Looking ahead to the European Parliament elections in May, Tusk warned against the emergency of a nationalist front opposed to the EU itself.

“It cannot be ruled out that there will be two streams represented: one in the colors of the brownshirts – anti-European and focused on nationalism, and the second which wants to push as much as possible for EU integration.”

The former Polish prime minister also spoke of rising anti-European sentiment in several capitals, saying some forces wanted “conflict rather than cooperation, disintegration rather than integration”.

Without naming names, Tusk criticized Polish leaders for their stance on Europe, after this week warning that the euroskeptic ruling party’s policies carried the risk of a “Polexit”.

“Those who are opposed to a strong Polish presence in Europe are de facto against our independence,” he declared. – Rappler.com