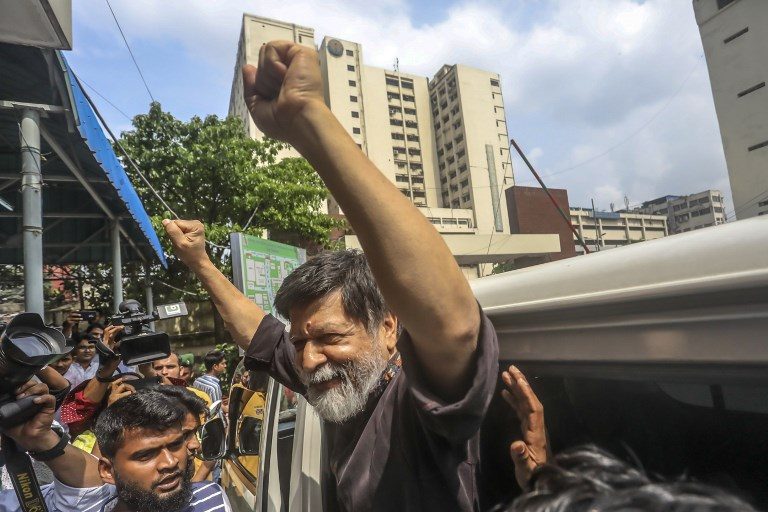 However it was not clear if the 63-year-old would be freed immediately, his lawyers said, as bail orders take time to execute and prosecutors could urgently appeal the decision in a higher court.

The photographer had unsuccessfully applied for bail 4 times since being arrested in August for making what Bangladesh authorities called “false” and “provocative” statements.

Alam, whose work has appeared widely in global media and who founded the renowned Pathshala South Asian Media Institute, faces a maximum 14 years in jail if convicted.

The internationally respected photographer said he was beaten so badly in custody he needed to wash his tunic to get the blood out.

Lawyers have argued Alam’s continued detention was “a clear violation” of his fundamental rights under Bangladesh’s constitution.

Alam was held under controversial internet laws which critics say have been wielded by Prime Minister Sheikh Hasina to stifle dissent and harass journalists.

His arrest followed 9 straight days of protests by students who blocked Dhaka streets to show their fury at road safety conditions after two teenagers were killed by a speeding bus.

The massive rallies evolved into broader demonstrations against Hasina, who will seek a third consecutive term next month, and the Awami League party she leads.

Alam told Al Jazeera at the time that the protests were the result of pent-up anger at corruption and an “unelected government… clinging on by brute force”.

He was arrested the same day, the most high-profile of many protesters held on similar charges as authorities cracked down on demonstrators.

Human Rights Watch accused Bangladesh of targeting activists and journalists in the wake of the protests instead of prosecuting those who attacked students with fists and rods.

Michelle Bachelet issued her first statement as UN High Commissioner for Human Rights to raise the attacks and arrests of journalists in Bangladesh.

In recent weeks, Hasina has been accused of stifling dissent further by ratifying a controversial new digital-security law.

A prominent critic of the government was arrested for defamation last month, days after he helped form an opposition coalition. – Rappler.com