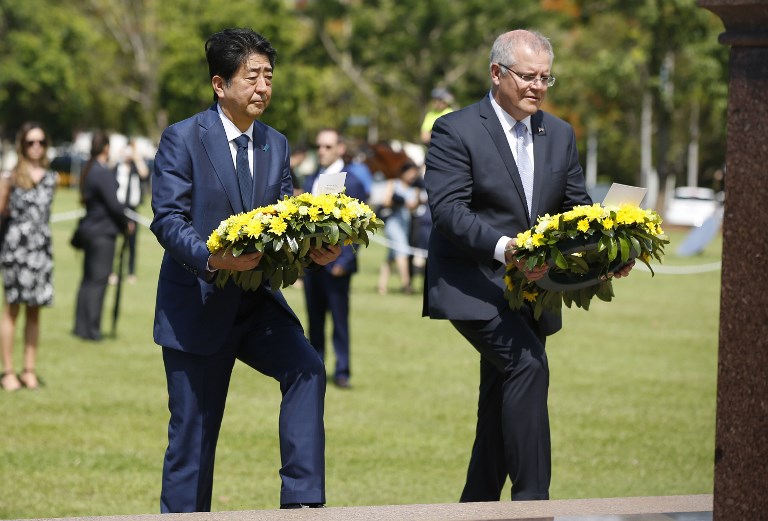 DARWIN, Australia – Japanese Prime Minister Shinzo Abe made a historic visit to Darwin on Friday, November 16, some 75 years after Japan bombed the northern Australian city, as the two countries cement ties in the face of an emergent China.

Trade and closer defense relations are the centrepieces of Abe’s two-day visit and meetings with Prime Minister Scott Morrison, before the pair travel to Papua New Guinea for a weekend APEC summit.

Abe is the first Japanese leader to visit the port city where more than 250 people were killed during multiple bombing raids in 1942-43 during World War II – the worst-ever foreign attacks on the country.

Abe and Morrison paid their respects at memorials to the war dead in an act reminiscent of the Japanese leader’s visit to Pearl Harbor in 2016.

“Prime Minister Abe’s visit is deeply symbolic and significant and it will build on our two countries’ strong and enduring friendship as well as our economic, security, community and historical ties,” Morrison said in a statement.

Veterans described the wreath-laying in a ceremony at the Darwin Cenotaph as moving.

“To see the Japanese prime minister here actually laying a wreath on our war memorial, it is a quite emotional thing. It is amazing that in 70 or so years we’ve come this far,” one veteran told the Australian Broadcasting Corporation.

On Saturday, Abe will also remember Japanese casualties when he visits a cenotaph for navy personnel who died when the I-124 was sunk by HMAS Deloraine in January 1942 – the first Japanese submarine to be sunk by an Australian ship.

Abe later Friday will attend a ceremony marking the opening of a $34 billion pipeline project, in which Japan’s Inpex is the majority shareholder and operator.

The operation taps fields off Australia’s northern coast and pipes the gas nearly 900 kilometers to a port near Darwin.

The leaders also met for talks that Australian officials said would include ongoing efforts to reach agreement on enhanced defence cooperation, including regular joint military exercises.

That effort reflects the desire of both countries to expand their involvement across the Pacific to counter increased Chinese military and economic activity in the region.

Japan and Australia played leading roles in reviving the Trans-Pacific Partnership trade deal after President Donald Trump withdrew US support for the agreement.

Canberra and Tokyo also both recently launched Pacific infrastructure projects to offer alternatives to Beijing’s so-called Belt and Road initiative, which has seen China pour billions of dollars of investment into the area.

The regional competition will be on full view Friday as Abe’s Darwin visit coincides with a mini-summit organized by Chinese President Xi Jinping with 7 Pacific island leaders in Papua New Guinea ahead of the APEC conference. – Rappler.com