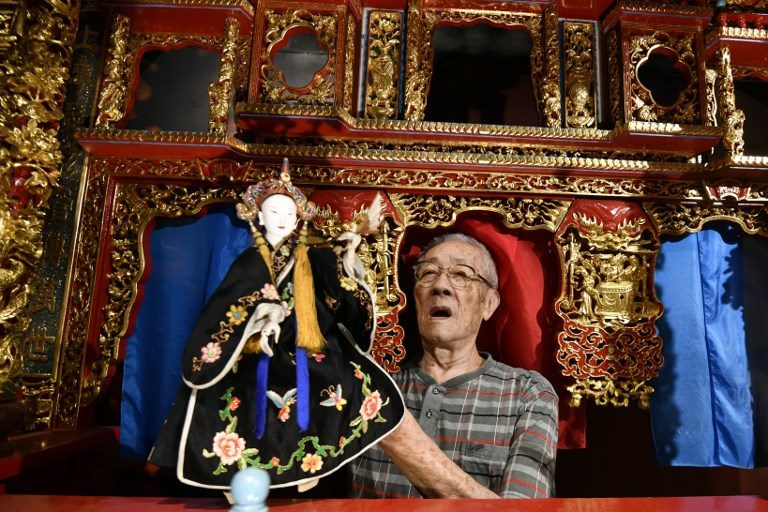 TAIPEI, Taiwan – At 87 years old, Taiwanese glove puppeteer Chen Hsi-huang is the star of a new documentary which reflects his determination to revive the dying traditional craft and a late-life renaissance as a high-profile promoter of the art form.

The film, entitled “Father”, tells the story of how Chen pursued the craft in the shadow of his father, the legendary puppeteer Li Tian-lu, who drew huge audiences to his shows in the 1950-1970s and appeared in several movies.

Also known as “Budaixi,” glove puppetry spread to Taiwan in the 19th century from the southeastern Chinese province of Fujian and was mainly performed at religious and festive occasions, becoming a popular form of entertainment.

Chen said he values the traditional puppetry because it is characterized by subtle movements, with the puppeteer taking on all roles, from a young woman to an old man.

He first set up his own troupe at 23 years old but as business declined he was forced to shut shop at 40. He went on to teach the craft and continued to perform with other groups in Taiwan and overseas.

At the age of 79, motivated by his desire to stop the art form fading completely in the face of modern entertainment, he set up a new troupe and teaches puppetry at weekend classes as well as taking on apprentices.

“There were only two or 3 traditional troupes left,” he told AFP.

“I used my name to open a new troupe because I didn’t want the traditional craft to disappear.”

Chen acknowledges the challenges facing the ancient craft, saying people have less time to spare to watch the shows.

But he has taken heart from the positive response to the documentary which premiered in Taiwan last month, directed by local filmmaker Yang Li-chou over a period of 10 years.

“I was worried that people might not understand the film, but young people did, even if they hadn’t watched Budaixi before. They told me they liked it and that puppetry is awesome,” says Chen.

Chen’s current apprentice Chen Wei-you is part of a family troupe that runs around 150 puppet shows a year.

“My grandfather actually told me to find ‘a better job’ but I chose this career because I am interested,” the 32-year-old told AFP.

“Like the master, I don’t want the traditional puppetry to disappear,” he said.

Dozens of students of all ages attend Chen’s classes at the government-funded Puppetry Art Centre in Taipei every Saturday.

Student Hung Wei-heng, 10, said he was interested in learning puppetry because it was “very cool”.

“I want to learn how to operate the puppets and to make the movements,” he said.

“Now that I have kids of my own, I bring them to temple fairs and watch outdoor puppet shows. They are experiencing what I experienced in my childhood,” he said.

Puppet master Chen vows to continue performing and teaching as long as he still has the strength.

“I haven’t completed passing on the art so I can’t retire,” he said. – Rappler.com