Greek silk road town finds itself back in fashion 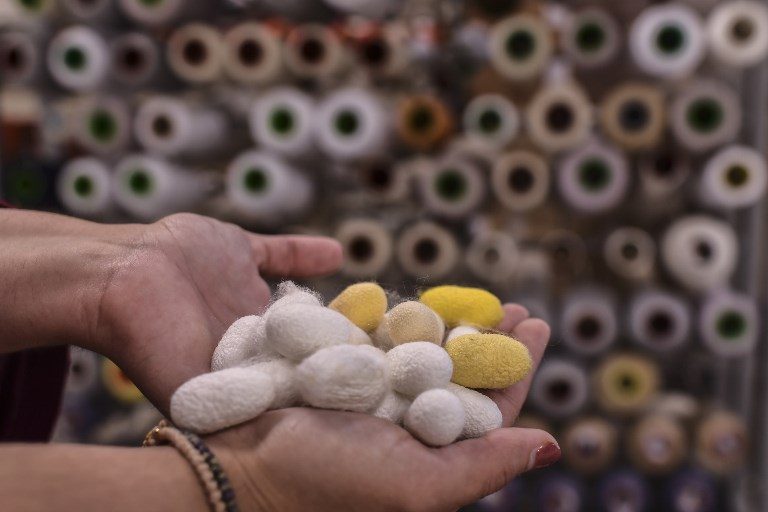 Facebook Twitter Copy URL
Copied
There is an air of revival in this dormant, isolated Greek town now that silk is again de rigueur on the world's most prestigious catwalks, and demand from designers for the luxurious fabric is rising

SOUFLI, Greece – Inside the machine-crammed Mouhtarides factory near the Greek-Turkish border, Ioanna Pistola deftly spins a silk thread in a loom, ignoring the deafening noise around her.

“I’ve been working in this hall for 20 years,” the middle-aged weaver shouts above the din.

The dormant, isolated town of Soufli has been a key center for Greek silk production since the 19th century.

This was also the first area in Europe to rear silkworms after they were smuggled by Byzantine monks out of India in the 6th century AD.

Silk, much of it homemade, has sustained the town of around 4,000 inhabitants for decades, although the number of factories has fallen.

Now though, say the town’s last two active producers, silk is again de rigueur on the world’s most prestigious catwalks, and demand from designers for the luxurious fabric is on the up.

“Penetrate into the world of fashion, this is what Soufli is trying to do… there is no haute couture without silk nowadays,” says Yiorgos Tsiakiris, owner of the factory that bears his name.

“The area’s great advantage is its long experience (with sericulture)… This is where silk was first produced in Europe… we should exploit this advantage,” he adds.

His production site is not far from the Mouhtarides factory, where marketing manager Despina Bakarou also talks of concerted action to make the most of current trends.

“Silk is making a comeback. Fashion designers are asking for it. We are trying to maximize the quantity and quality of our production,” she says.

Silk has played a role in the family history of practically everyone who originates from Soufli.

“Every family grew silk,” says Matina Lekka, a local pensioner, whose mother worked at the Givre factory before it closed in the 1960s.

In its heyday, the factory, founded by two Jewish brothers, Bohor and Eliezer Givre, exported silk as far as the French cities of Lyon and Bordeaux.

But after World War II, textile makers turned to cheaper synthetic materials such as nylon, and the area’s once-prided infrastructure fell into disuse.

A further blow came at the end of the 1990s, with the opening up of the silk market.

While the two factories produce a small amount of silk themselves, most of what they use to make their items comes from China.

Now, says Tsiakiris, there is a real opportunity for European sericulture to bounce back amid China’s increasing industrialization, which has led to a decline in its rurally-based silk production.

“There is great demand for silk. And there is a shortage… China in recent years has given up thousands of hectares of mulberry trees, and people are moving out of rural areas to the cities,” he said.

Soufli is surrounded by 300 hectares of mulberry trees – the leaves of which are eaten by the silkworms –, providing an abundance of a raw material waiting for revival.

Each silkworm cocoon can yield a continuous silk strand of up to 2.5 kilometres (1.6 miles) long.

“There are also thousands of mulberry trees still in the area, it’s a basis to build on,” says Tsiakiris.

With enough trees, a reliable crop of silkworms can emerge in about three years, he notes.

“There are European investors standing by, ready to spend up to 20 million euros ($23 million) here,” he adds, declining to divulge names.

“There is major interest, these people are worried about the future of sericulture in China,” the factory owner tells AFP.

To make it big, the town also needs an industrial-size silk reeling machine.

The Hermes Foundation, the public benefit arm of the global luxury brand, recently financed the purchase of a small reeling unit but it is insufficient to cover mass production.

As a result, the cocoons must be sent to Italy for processing.

Chinese investors are also showing an interest. A group visited the area in June alongside Greek Development Minister Stergios Pitsiorlas.

With 4 local museums already dedicated to the silk industry, the town is also ripe for further development as a tourism destination.

The town municipality plans to renovate an old mansion to be used as a hostel and an area to demonstrate how silkworms are raised. – Rappler.com