U.S. to give Saudis a pass even if Crown Prince behind murder 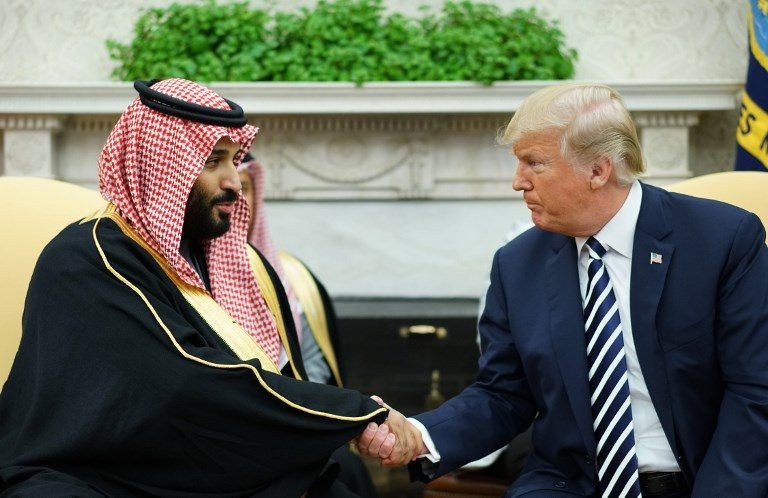 Facebook Twitter Copy URL
Copied
'We may never know all of the facts surrounding the murder of Mr Jamal Khashoggi. In any case, our relationship is with the Kingdom of Saudi Arabia,' says President Donald Trump

WASHINGTON DC, USA – President Donald Trump vowed Tuesday, November 20, to stick by ally Saudi Arabia even while admitting that de facto leader Crown Prince Mohammed bin Salman may have been behind the brutal murder of a dissident journalist.

“It could very well be that the Crown Prince had knowledge of this tragic event – maybe he did and maybe he didn’t!” Trump said in a statement.

“We may never know all of the facts surrounding the murder of Mr Jamal Khashoggi. In any case, our relationship is with the Kingdom of Saudi Arabia,” he said. “The United States intends to remain a steadfast partner.”

The gruesome murder of Khashoggi, who vanished after being lured into the Saudi consulate in Istanbul on October 2, has hugely embarrassed Washington.

The killing torpedoed a PR campaign led by the crown prince to show that the conservative Islamic state has embarked on a new reformist path.

It also threw into question the White House strategy to make MBS, as the royal is widely known, its main partner in the tinderbox region.

Trump has for weeks resisted accepting mounting evidence of Saudi government involvement in the Khashoggi killing – and accusations that MBS ordered the hit.

However, with The New York Times reporting that the CIA has definitively concluded that Prince Mohammed was involved, the focus turned to whether Trump would punish his Saudi partner or find a way to let it slide.

In his statement, released by the White House press office, Trump took the latter option, saying that the US-Saudi relationship was more important than the possible involvement in the crime of Prince Mohammed.

He noted that Saudi King Salman and the crown prince “vigorously deny any knowledge of the planning or execution of the murder of Mr Khashoggi.”

Saudi Arabia, he said, provides crucial help in the US struggle to contain Iranian ambitions, as well as having committed to $450 billion in US weapons contracts and other investments. In addition, the Saudis have helped in keeping oil prices low, Trump said.

“The United States intends to remain a steadfast partner of Saudi Arabia to ensure the interests of our country, Israel and all other partners in the region,” he said.

Trump acknowledged a push in Congress for the United States to sanction MBS and take other action against the Saudi leadership.

“I will consider whatever ideas are presented to me, but only if they are consistent with the absolute security and safety of America,” he said.

The Washington Post responded that Trump had placed “personal relationships and commercial interests above American interests in his desire to continue to do business as usual.”

“Trump is correct in saying the world is a very dangerous place. His surrender to this state-ordered murder will only make it more so,” the newspaper said.

Trump’s statement caps a steady campaign to delay judgement on the Saudis over the fate of Khashoggi, a US resident who was sometimes critical of MBS and wrote for The Washington Post newspaper.

Long after Turkish sources and others had provided strong evidence that Khashoggi was murdered in the Istanbul consulate, the White House insisted that it was too early to tell.

After Saudi Arabia accepted responsibility and said that 21 people were in custody, with death penalties sought against 5 men, attention turned to whether MBS would be found culpable.

While Trump told journalists later Tuesday that the CIA report had found “nothing definitive,” US media reports described the analysis as concluding with “high confidence” that the crown prince ordered the murder.

“Since Mr. Trump excels in dishonesty, it is now up to members of Congress to obtain & declassify the CIA findings on Jamal Khashoggi’s death,” John Brennan, a former CIA director and fierce Trump critic, tweeted.

“No one in Saudi Arabia – most especially the Crown Prince – should escape accountability for such a heinous act.”

Senator Jeanne Shaheen said the White House maneuver demonstrated “President Trump’s habit of siding with murderous foreign dictators over American intelligence professionals” and called this “a stain on our democracy.”

But Secretary of State Mike Pompeo echoed Trump, indicating that Washington’s relationship with the Saudis is bigger than the horrific murder.

“It’s a mean, nasty world out there, the Middle East in particular,” he told journalists.

“It is the president’s obligation, indeed the state department’s duty as well, to ensure that we adopt policies that further America’s national security. So as the president said today, the United States will continue to have a relationship with the Kingdom of Saudi Arabia. They’re an important partner of ours.” – Rappler.com