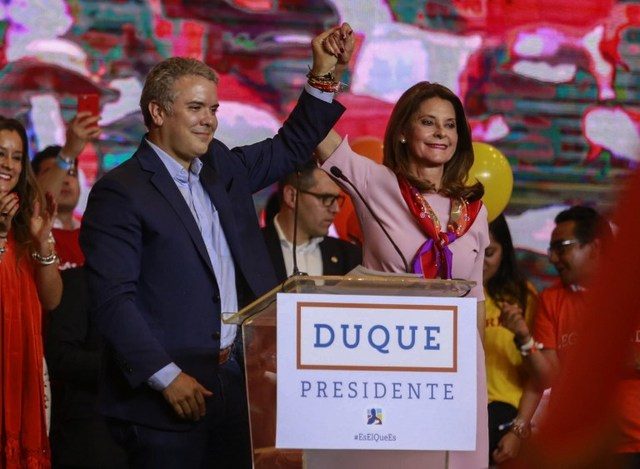 Facebook Twitter Copy URL
Copied
Police detains 3 Venezuelan citizens in possession of 'weapons of war,' who are believed to be part of the alleged plot to assassinate Colombia President Ivan Duque

BOGOTA, Colombia – Colombia’s foreign minister on Saturday, December 29 condemned an alleged plot to kill President Ivan Duque and said 3 Venezuelan citizens had been detained in possession of “weapons of war.”

“For several months there have been intelligence probes into possible attacks against the life of the president,” Carlos Holmes Trujillo said in a video on the ministry’s social media accounts.

He added that 3 Venezuelans in possession of “weapons of war” had been captured in connection with such plots, without going into further details.

In a separate statement, Trujillo said that the threats came from “internal and external actors.”

The announcements come amid tensions between Bogota and Caracas, following the mutual expulsion of officials from both nations and the presence earlier this month of Russian long-range bombers in Venezuela.

President Duque has called upon the “countries that defend democracy” to not recognize the government of Nicolas Maduro, who begins a new term on January 10, after being re-elected in polls that were boycotted by the opposition and branded a fraud by the international community.

Maduro, for his part, has said the future government of Brazil under President-elect Jair Bolsonaro, Colombia and the United States are all involved in plotting a coup in Venezuela and want to assassinate him.

Duque’s government has said it would not support a military intervention in Venezuela, with which it shares a 2,200 kilometer (1,350 miles) border.

Washington, on the other hand, has indicated “all options are on the table” for dealing with Venezuela’s socialist leader.

Right-winger Duque took office in August promising to diplomatically isolate the Venezuelan regime, which he calls a “dictatorship,” and to get tough on his country’s drug traffickers and remaining guerilla groups.

Colombia is the main host country for Venezuelan migrants who have fled their country’s economic crisis, the worst in its history.

According to the UN, about 2.3 million people left Venezuela since 2015. – Rappler.com