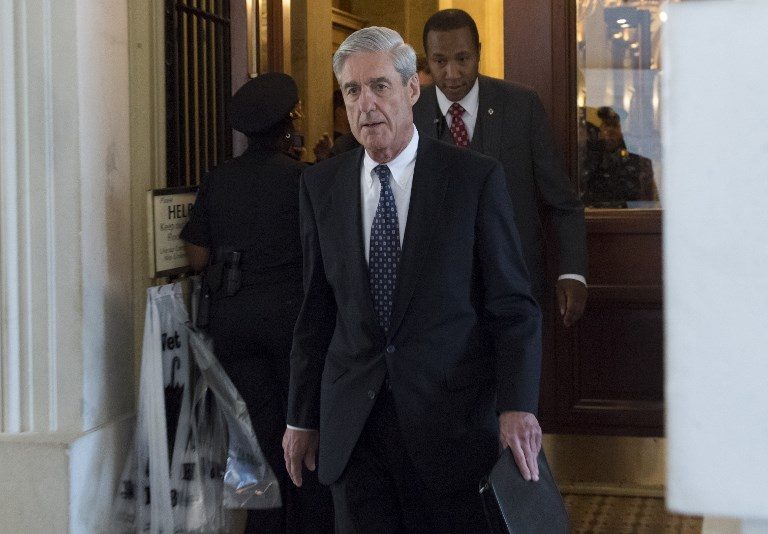 Facebook Twitter Copy URL
Copied
Acting Attorney General Matthew Whitaker says, 'I am comfortable that the decisions that were made (in the Mueller report) are going to be reviewed, you know, through the various means that we have'

Mueller’s office has been notoriously tight-lipped about the progress of the high-profile investigation, and Whitaker’s remarks were the first official indication that the probe may be coming to a close.

“The Mueller investigation is close to being completed,” Whitaker told journalists.

“I’ve been fully briefed on the investigation and I look forward to Director Mueller delivering the final report,” he said.

“I hope we can get the report from Director Mueller as soon as possible.”

Mueller will submit his report to Whitaker unless he has been replaced as attorney general by then by Bill Barr, who has been nominated to the post by Trump but not yet confirmed by the Senate.

Without elaborating, Whitaker said: “I am comfortable that the decisions that were made (in the Mueller report) are going to be reviewed, you know, through the various means that we have.”

Mueller, a former FBI director, was named by Deputy Attorney General Rod Rosenstein in May 2017 to look into Russian meddling in the 2016 election.

Mueller’s team has indicted a total of 34 people – but so far, no charges of outright collusion between the Trump campaign and Moscow have been filed.

Trump has repeatedly denounced the investigation as a “political witch hunt” and fervently denied there was any collusion between his campaign and Moscow.

He has frequently taken to Twitter to condemn members of the Mueller team as a bunch of “angry Democrats.”

Trump has also dangled the possibility of pardons for some of those indicted.

On Friday, Roger Stone, 66, a veteran Republican operative and longtime Trump advisor, was arrested at his Florida home by FBI agents on charges of making false statements to Congress and witness tampering.

Stone has proclaimed his innocence and said he would fight the charges, but several other Trump associates indicted by Mueller have pleaded guilty to various charges.

Paul Manafort, 69, who served as Trump’s campaign chairman for several months in 2016, is awaiting sentencing after pleading guilty to tax and bank fraud connected to his work for pro-Russian politicians in Ukraine.

Michael Flynn, 60, a retired US Army general who stepped down after 3 weeks as Trump’s national security advisor, is awaiting sentencing after pleading guilty to lying to the FBI about his contacts with the Russian ambassador in Washington.

Trump’s longtime personal attorney and fixer Michael Cohen, 52, was sentenced to 3 years in prison in December after pleading guilty to tax evasion, violating campaign finance laws, making false statements to Congress and other crimes. He is to report to prison on March 6.

George Papadopoulos, 31, an oil industry analyst who served on Trump’s foreign policy advisory team, was sentenced to two weeks in prison after admitting he lied to the FBI.

Others indicted by Mueller include Alex Van Der Zwaan, a London lawyer who got 30 days in prison for lying about his work with Manafort, and Richard Pinedo, a California man who admitted to selling stolen bank and credit card numbers to the Russians.

In June 2018, Konstantin Kilimnik, who worked with Manafort in Ukraine and allegedly has ties to Russian intelligence, was charged with obstruction of justice.

Mueller has also charged 12 Russian intelligence officers with hacking Democratic Party emails and 13 other Russians with engaging in an online campaign to influence US voters in the 2016 election. – Rappler.com