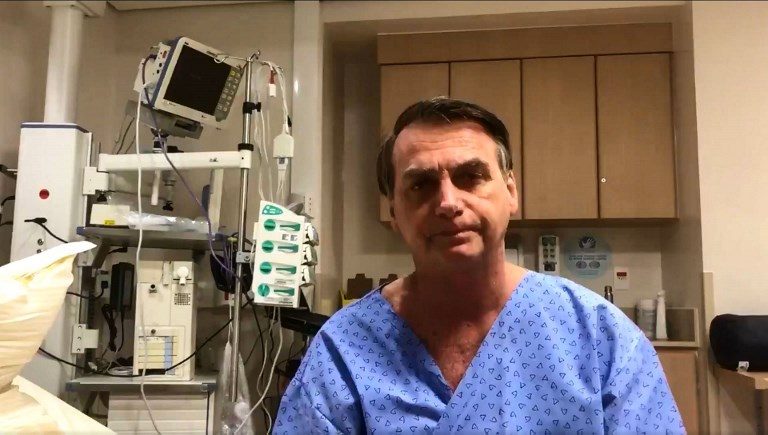 Facebook Twitter Copy URL
Copied
Now that he is out of the hospital, Brazilian President Jair Bolsonaro will have to prioritize reforming Brazil's unsustainable pension system – and reimposing his authority

Bolsonaro, 63, underwent surgery on January 28 to remove a colostomy bag and seal intestines perforated when he was stabbed by a lone assailant last September while campaigning to be president.

His discharge date was repeatedly pushed back over the past couple of weeks as he was treated for post-op complications including vomiting, fluid buildup, and a bout of pneumonia.

A convoy took him from the Sao Paulo hospital where he was treated to the airport. He then took an air force plane to fly to the capital Brasilia. A photo posted by his office showed Bolsonaro smiling as he walked down a corridor with officials in tow.

The far-right leader, a former paratrooper, had sought to project an image of still being in charge from his hospital bed.

But jockeying within the government during his absence led some observers to say he had left Brazil rudderless shortly after taking office at the beginning of January.

There was “a kind of power vacuum,” Thomaz Favaro of the political risk consultancy Control Risks told Agence France-Presse.

He said there was “a bit of worry” among hundreds of officials appointed to run government ministries, agencies, and state-run companies on how to implement Bolsonaro’s agenda while he was in hospital. (READ: Bolsonaro says Brazilians ‘don’t know what dictatorship is’)

The tensions exposed by the extended period of limbo reportedly including friction between Bolsonaro and his vice president, Hamilton Mourao, who very briefly served as acting leader.

“Do you want to kill me?” Bolsonaro asked Mourao in a telephone call over the weekend, the latter said, though making clear the president was joking, according to multiple reports in major Brazilian media.

Mourao, a retired general, was said by Brazilian political columnists to have irritated Bolsonaro’s entourage – especially his sons, 3 of whom are also politicians – by expanding his power base and influence through meetings with congressional heavyweights and diplomats and comments to the media.

The vice president particularly enraged them by publicly questioning the anti-crime justification of a decree Bolsonaro signed to ease gun ownership laws, and Bolsonaro’s controversial promise to eventually move Brazil’s embassy in Israel to Jerusalem.

Now that he is out, Bolsonaro will have two priorities to tackle: setting out the contours of a much-anticipated reform of Brazil’s unsustainable pension system – and reimposing his authority.

The Estado de Sao Paulo newspaper lamented the “administrative paralysis” caused by Bolsonaro’s extended hospitalization and what it saw as his sons’ undue influence.

“The government today is run by someone not in sufficient health to do so, and who suffers direct and broad influence from his sons – who received no vote to be president nor occupy any ministerial posts,” it said in an editorial on Tuesday, February 12.

The pension issue promises further struggles behind the scenes.

Bolsonaro won office partly by wooing investors with a pledge to overhaul Brazil’s limping, protectionist economy. That task has been largely delegated to his economy minister, Paulo Guedes, a US-trained free-marketeer.

Guedes has publicly toed the line set by Bolsonaro. But reports of tensions between him and the president’s chief of staff, Onyx Lorenzoni, have remained despite ostentatious pictures of the two lunching together.

And Guedes and Bolsonaro have differed on basic principles of the pension reform. Lorenzoni said the package would be unveiled at the end of this week before being sent to Congress, but only after Bolsonaro gave his green light.

According to a leak last week of an early draft proposal, the minimum retirement age would be hiked to 65 years for both men and women. Bolsonaro initially wanted a softer regime of 62 years for men and 57 for women, but is said to be ready to settle for 65 and 60 respectively.

The reform will require changes to Brazil’s constitution, to be voted by a congressional supermajority. If passed, it is expected to yield savings of up to one trillion reais ($273 billion) over a decade, according to Guedes.

Currently in Brazil, workers can make early retirement after contributing for 35 years in the case of men and 30 years for women. – Rappler.com