Feb 22, 2019 11:49 PM PHT
Agence France-Presse
Facebook Twitter Copy URL
Copied
Emperor Akihito and Empress Michiko will abdicate on April 30 from the Chrysanthemum Throne after a three-decade reign, making way for Naruhito and Masako to replace them the following day 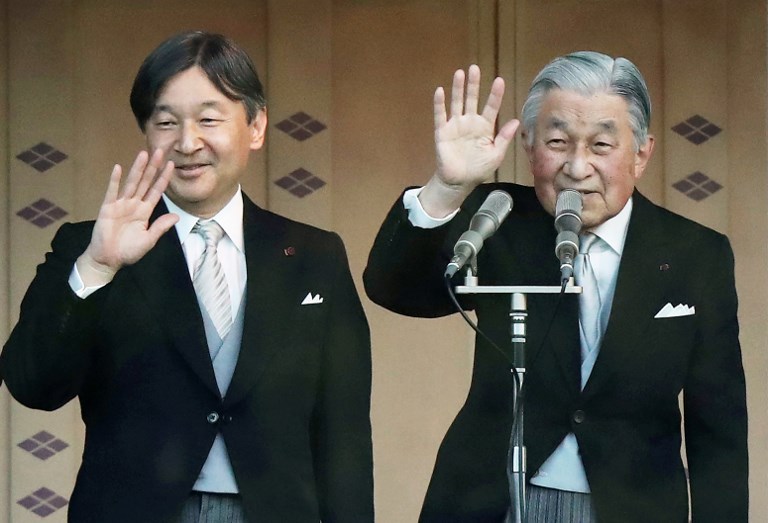 TOKYO, Japan – Japan’s Emperor-in-waiting Naruhito has pledged to maintain the royal household’s close ties to the public as he prepares to assume the throne in about two months with a “solemn feeling.”

At a press conference earlier this week to mark his 59th birthday, Crown Prince Naruhito also asked the public to “warmly” monitor the gradual recovery of his wife Crown Princess Masako, who has struggled for years with a stress-related illness.

“When I think about the time ahead, I have a very solemn feeling,” he said in the press conference, released Saturday, February 23.

“As (the current emperor and empress) have done, I wish to be always close to the people and share the joys as well as the sorrows to fulfil my duty as a symbol of the state.”

Current Emperor Akihito and Empress Michiko will abdicate on April 30 from the Chrysanthemum Throne after a three-decade reign, making way for Naruhito and Masako to replace them the following day.

The status of the emperor is sensitive in Japan given its 20th-century history of war waged in the name of Akihito’s father Hirohito, who died in 1989.

Akihito has modernized the royals and expanded his role by actively travelling across Japan, particularly to meet with victims of natural disasters and to visit sites that had been affected by World War II.

Purists say, however, Japanese emperors’ primary duty is to pray for the peace and happiness of the nation in a secretive world of elaborate Shinto-based rituals.

Naruhito said he will follow in his father’s footsteps, while also searching for his way to adapt to the changing times.

The Crown Prince asked the public for their understanding as Masako battles ill health.

But she has been gradually expanding her activities.

“In the future, as her status changes and the volume of her official duties increases, she won’t be able to do everything overnight,” warned Naruhito.

“But, while watching her health, Masako will continue her efforts to get better. So I hope the Japanese people will warmly continue to monitor her recovery.”

Naruhito, who has studied scientific issues related to water as his life’s work, said he wanted to use his knowledge to deal with natural disasters, frequent in Japan.

He also said he wanted to continue international exchanges as a key duty. – Rappler.com