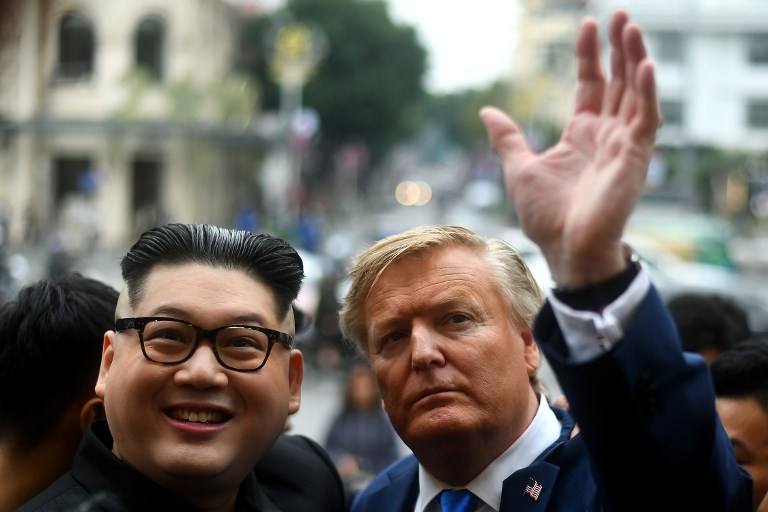 HANOI, Vietnam – Kim Jong-un and Donald Trump impersonators were held for questioning by Vietnamese police after they appeared in Hanoi, where the US and North Korean leaders will meet next week for a second summit.

Kim impersonator Howard X and Donald Trump lookalike Russell White staged a ‘meeting’ in downtown Hanoi Friday, February 22,  ahead of a second summit between the real Trump and Kim on February 27-28 in the Vietnamese capital.

About 10 police officers later showed up at a local TV station where they were giving an interview, and told them to stop making media appearances or risk being deported.

“They basically said stop doing the impersonation or we will kick you out of the country,” Howard X told AFP after he was released from questioning and back at his hotel, where he believed plainclothes police were monitoring him.

The police told the pair they could only travel around the city with an approved itinerary and travel guide.

Howard X, a Hong Kong resident, insisted he was in Vietnam legally and will not leave unless he is forced to do so.

The pair appeared with black-clad security guards at Hanoi’s Metropole hotel and Opera House earlier in the day, where they were swarmed by press.

In character, Trump lookalike White said they came with an intention to scale down North Korea’s nuclear ambitions.

“We’re working toward peace. Through negotiations, with dialogue, we want to help North Korea of course,” he said, wearing heavy bronzer and with freshly gelled hair.

Full-time Kim impersonator Howard X joked that his colleague might have to look past Pyongyang’s nuclear intentions in order to meet eye-to-eye.

“Hopefully he can overlook all my nuclear missiles and lift the sanctions,” said Howard X, who also visited Singapore ahead of the leaders’ meeting last year.

Before the police standoff, the men said they planned to visit a massage parlor, play a round of golf and maybe try some of Hanoi’s culinary delights.

But they may not be allowed to do so by authorities in Vietnam, a one-party communist state hoping to pull off next week’s summit without any embarrassment as the world watches.

Vietnam’s hardline administration have little tolerance for spontaneous public gatherings of any sort, and Vietnamese security personnel were keeping a close eye on the impersonators during their afternoon walkabout.

Howard X also ran into to security issues last June ahead of the first Trump-Kim meeting in Singapore, when he was held at the airport and told to stay away from summit venues. He was eventually permitted into the city state.

The pair say they are looking for a few more impersonators to complete their band of “tyrants”, calling for any lookalikes of Russian leader Vladimir Putin, China’s Xi Jinping or Brazilian President Jair Bolsonaro to come forward. – Rappler.com