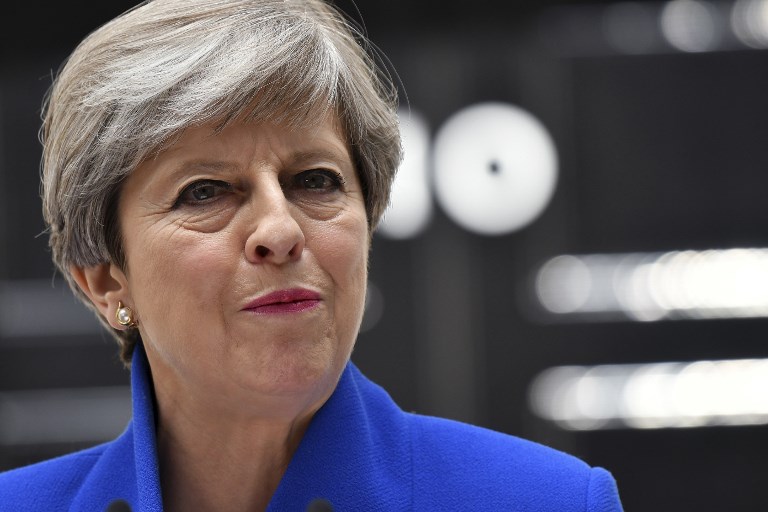 LONDON, United Kingdom (UPDATED) – British Prime Minister Theresa May promised on Tuesday, February 26, to allow parliament to delay Brexit by up to 3 months so that Britain would not crash out of the European Union without a deal on March 29.

The dramatic reversal in May’s steadfast strategy came after threats of mass resignations from her own ministers and calls for a second referendum on Britain’s EU membership from the main opposition Labour Party.

It saw the pound rally to its highest level since May 2017 against the euro – and since October 2018 against the dollar – as investor fears of imminent trade gridlock and financial market mayhem eased.

But the change in course did little to draw London and Brussels closer to an agreement over how to end a 46-year partnership that Britons narrowly voted to end in a June 2016 referendum.

The beleaguered British leader told parliament she would offer MPs the chance on March 14 to back a “short, limited” extension of the Brexit deadline if her own divorce proposals fail to win the support of lawmakers by March 12.

But she also stressed that she wanted to leave the bloc on time.

“Our absolute focus should be on working to get a deal and leaving on 29 March,” May said.

May laid out a 3-step procedure that begins with a vote in parliament on her latest Brexit proposals by March 12.

Their refusal to back her would see lawmakers confronted with the option of leaving the EU club without an agreement.

“The United Kingdom will only leave without a deal on 29 March if there is explicit consent in this House for that outcome,” May said.

That measure’s expected defeat would see parliament vote on March 14 on a deadline extension.

The other 27 EU leaders would need to unanimously approve a delay by March 29.

The EU has been watching with growing concern the political machinations in Britain and the possibility that the country will crash out of the bloc without a deal, risking chaos on both sides of the Channel.

European Council President Donald Tusk said Monday, February 25, after meeting May on the sidelines of an EU-Arab summit in Egypt that an extension would be a “rational solution”.

But some of the bloc’s officials have argued that there was no point in briefly postponing the deadline – and prolonging the market uncertainty – only to be confronted with the same issues again.

And May has repeatedly said that the no-deal threat must be kept on the table in order to wrest concessions from Brussels needed to push her deal through parliament.

Yet her strategy’s failure to make tangible headway so close to the wire was raising the prospects of a major mutiny in her ministerial ranks.

Three junior ministers wrote a letter in the Daily Mail in which they threatened to quit if May failed to “ensure that we are not swept over the precipice on March 29”.

The rebel ministers were all backing a proposed parliamentary amendment that would force May to set a new Brexit date if she fails to get better terms on the disputed issue of the border between Northern Ireland and EU member Ireland.

Any delay will likely infuriate powerful euroskeptics in both May’s government and her Conservative party who fear Brexit either being watered down or reversed.

“The cliff edge, if that’s the term people want to use, has merely been moved back,” he told Sky News.

And those still hoping to avert the split were boosted by the Labour Party’s conditional decision to back a second Brexit referendum on Monday.

Labour leader Jeremy Corbyn bowed to the pressure from the more EU-friendly wing of his party by offering a way to halt “a damaging Tory Brexit”.

Corbyn said on Tuesday that May’s deal must also face “a confirmatory public vote” if it is ever approved. – Rappler.com