No deal, no problem at Trump-Kim summit – analysts

Mar 1, 2019 7:11 AM PHT
Agence France-Presse
Facebook Twitter Copy URL
Copied
'Think of the Trump-Kim relationship like a Korean drama. We are just beginning to watch the long love story unfold.' 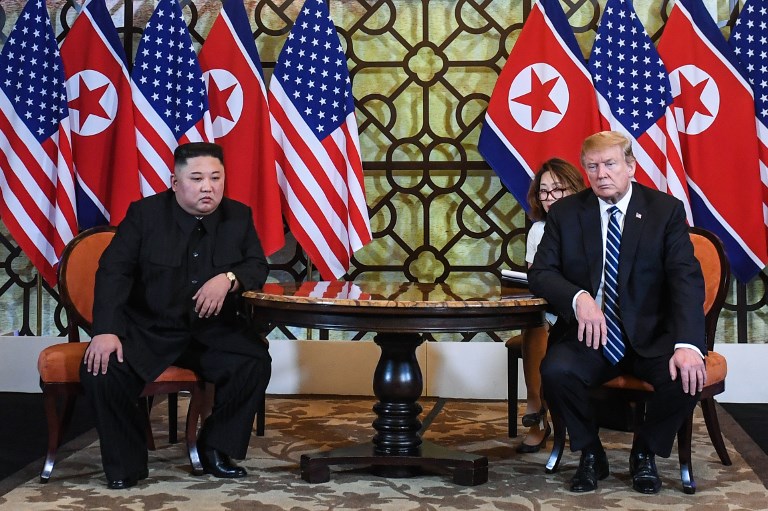 HANOï, Vietnam – Donald Trump summoned the world’s media to Hanoi for a meeting with Kim Jong-un, travelled the long way around the world to get there, and dangled an “AWESOME” future before the North Korean leader. And they did not agree anything.

That may not be such a bad thing, analysts say – but reaching a deal will take a long time.

Trump and Kim’s Singapore summit – the first-ever encounter between the leaders of two countries on opposite sides of the technically still unfinished Korean War – made global headlines last year.

The agreement they signed, though, was short on specifics, with Kim committing only to a vague promise to “work toward complete denuclearization of the Korean peninsula”.

Subsequent progress stalled with the two sides disagreeing over what that means, and ahead of the Hanoi meeting analysts expected them to put meat on the bones of the text.

In the event, there was more bonhomie in the Vietnamese capital – a venue chosen partly to symbolize the possibility of a good post-war relationship with the US – but even less in the way of tangible outcomes, with no communique emerging from the summit.

Trump told reporters Kim wanted all sanctions imposed on the North over its weapons programs lifted before it made any further moves over its Yongbyon nuclear plant and other covert sites, and he had decided to walk away.

“I’d much rather do it right than do it fast,” he added.

At a surprise late-night briefing North Korea’s foreign minister insisted that Pyongyang had only wanted partial sanctions relief in exchange for Yongbyon’s closure, and that its position was “invariable”.

The optics of the stand-off looked poor. But analysts pointed to the meeting as part of a long process, and potentially a necessary one.

“These talks were not a failure,” said David Kim of the Stimson Center.

“Think of the Trump-Kim relationship like a Korean drama,” he went on. “We are just beginning to watch the long love story unfold.”

It would be filled with “excitement, disappointment and utter heartache”, but “the bond between Kim and Trump will remain steadfast to the end.

“As long as both ‘lovers’ remain committed to their relationship, we can expect more positive outcomes in the future.”

Trump has previously said he and Kim “fell in love” over an exchange of letters, and while no third summit with Kim had been agreed, the White House said working-level talks would continue.

But in his New Year speech, a key political set-piece in the North, Kim said Pyongyang would seek a “new way” to defend its interests if Washington did not offer concessions in return for the steps it has already taken – a missile and nuclear test moratorium, and what it says is the destruction of facilities it no longer needs.

That raises the prospect of Kim turning to neighbor and ally China for succour.

In and before Hanoi, Trump repeatedly said the North could become an “economic powerhouse” if it gave up its weapons.

The two discussed liaison offices – a vital initial step in normalizing relations – and Ankit Panda of the Federation of American Scientists said there were “multiple credible reports an end-of-war declaration was on the table.”

But those were “never the ‘corresponding measures’ North Korea sought”, he added.

Pyongyang will once again have been able to portray itself as Washington’s equal, and Kim as Trump’s – the state-run Rodong Sinmun newspaper carried a front-page picture Thursday that showed the US president appearing to bow slightly as the pair shook hands.

Former CIA analyst Soo Kim noted that Trump had insisted several times he was in no rush to complete a deal and that with the North not yet prepared to take the steps Washington wanted, the US president “so far looks at ease with this decision”.

But, she told AFP: “This outcome is likely not what the Kim regime had banked on. So it remains to be seen whether after the rug has been pulled from underneath, North Korea will bite again at another opportunity.”

The no-result from Hanoi leaves South Korean President Moon Jae-in – who seized on last year’s Winter Olympics in his country to broker talks between Pyongyang and Washington – in a bind.

Moon had intended to unveil an inter-Korean economic co-operation plan on Friday, said former CIA staffer Kim, the 100th anniversary of a movement against Japanese colonial rule – one issue on which North and South Koreans are in total agreement.

Now suggestions of a Kim Jong-un trip to Seoul are likely to go on the back burner, and she said it “remained to be seen” whether Moon would be able to pursue his inter-Korean rapprochement so quickly.

Christopher Green, senior advisor at International Crisis Group, said the outcome was unexpected, “but I don’t think it’s a disaster and it doesn’t end the dialogue process”.

“There will have to be some re-booting and I would expect after a period of relative quiet that lower level talks will begin again,” he added.

But while Trump has his eye on next year’s US presidential election – and is said to want a Nobel Peace Prize – Kim is the third generation of his family to rule the North and undoubtedly expects to remain in power for decades.

And Ri said the North’s stance would “never” change in any future negotiations.

“These talks will take a long time and will far outlive this presidency,” said David Kim.

“Patience is a virtue.” – Rappler.com