Thousands gather at border to welcome back Indian pilot 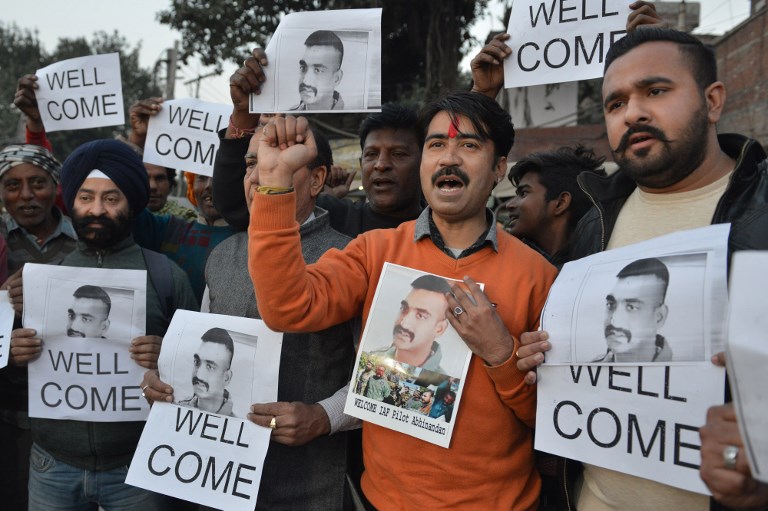 WAGAH, India – Thousands of Indians, some waving flags and singing, gathered on Friday, March 1, to give a hero’s welcome to an air force pilot due to be returned across the border after being shot down by Pakistan.

Islamabad’s “peace gesture” of freeing Wing Commander Abhinandan Varthaman comes after tensions with New Delhi over Kashmir escalated this week to their highest level in years.

The fighter pilot of 16 years’ experience from Chennai has emerged as the face of the latest standoff, which has seen the nuclear-armed rivals exchange rare aerial raids.

Abhinandan’s parents were given a standing ovation by fellow passengers as they boarded a flight to Amritsar near the Wagah border crossing to welcome their son.

The highly symbolic Wagah crossing point, where the handover is due to take place, is famed for hosting colourful rival ceremonies by Indian and Pakistani soldiers each day at sundown.

Patriotic spectators fill stadium-style stands on each side to cheer as goosestepping troops bring down their national flags in elaborate, competing performances.

On Friday, thousands of people had crowded in early to get a glimpse of Abhinandan, clutching sweets and garlands as they waited for his return, an AFP reporter said.

“Pakistan should learn its lesson. The film is not over yet. (Prime Minister Narendra) Modi will teach them a lesson,” one man at Wagah told Indian television.

A group of schoolchildren brandished a painting of the pilot, along with saffron, white and green Indian flags and placards reading: “Hope for peace between India & Pakistan” and “Thank you Imran Khan”, referring to Pakistan’s prime minister.

An old man with a white beard banged a drum as groups of young men sang and danced.

“We are very happy that the hero of our country is coming back. We have come here to support him,” another spectator who came to the Wagah border with his family told the ABP news channel.

After Abhinandan was shot down on Wednesday in a dogfight with Pakistani aircraft, purported footage that went viral showed him being beaten by locals before Pakistani soldiers intervened.

A video released by the Pakistani military later showed Abhinandan sipping tea, his face swollen and sporting bruises but otherwise collected and calm.

His polite refusal to proffer more details than necessary — “I am sorry major, I am not supposed to tell you this” – won him particular sympathy in India.

His father, a retired air force officer, told the Times of India newspaper, “Just look at the way he talked so bravely… a true soldier… we are proud of him.”

Social media has been abuzz with #GivebackAbhinandan and #Abhinandanmyhero hashtags elevating the pilot to national hero status.

Abhinandan was captured a day after Indian fighter planes bombed what India said was a militant camp in Pakistan, in retaliation for a suicide bombing in Kashmir on February 14 that killed 40 paramilitaries.

He was among the fighter pilots scrambled to repel a Pakistani incursion over the border the next day. – Rappler.com